A Blessing in Mule's Feet 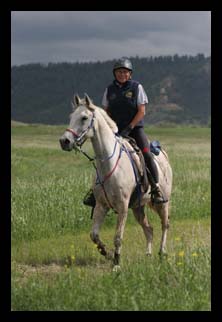 This is what happens when you aren't fast enough to be a racehorse:

Namely, you end up in the barn of Jan Worthington in Scales Mound, Illinois.

And to think she almost sent him back.

"I bought him just by looking at his pictures - which was a big risk, because you don't know what their minds or soundness will be like - but when he arrived here, his feet were not the same as the pictures I was sent!" The former owner Leon had sent pictures of some big solid round horse feet. 'Leon' the horse had little mule feet.

Which turned out to be an asset. "With feet like this," Jan's farrier told her, "He'll stay sound forever." And so far he has. (Except for the time with the lightning bolt...)

That was 4 years ago, when Leon - Golden Lightning, a son of *Wiking (the imported Polish arabian, who became the all-time leading sire of Arabian racehorses), was 6. Since then, Leon and Jan have travelled the world together, and formed a strong bond while sharing some rather hair-raising adventures.

Horses weren't always in the picture for Jan, though. "I wanted to ride since I was born - I can't remember not wanting a horse." But her parents didn't have a lot of money, so there wasn't much she could do except dream, like a lot of little horse-crazy girls. She saved her money from babysitting, ("back in those days, we got 50 cents an hour"), and in 8th grade she had finally saved enough to buy her first horse. "That horse ran away with me all the time, it was a wonder I wasn't killed."

Her family moved to Fairfax, Virginia, when she was 14 or 15, and - lucky Jan - a horse came with the house. "It was the start of my quasi-endurance riding. I rode with the hunt, and since we couldn't afford a truck and trailer, I'd ride my horse to the hunt along the roads, do the hunt, and then ride her back on the roads. It was a wonder I wasn't killed then too!"

Jan's horse life stopped temporarily, as it tends to do sometimes, when she got married and had kids. When the kids were out of the house, she bought a horse again. A friend of her farrier did endurance and competitive trail riding, and so Jan did her first endurance ride.

She was instantly hooked. It wasn't long before she bought her son Guy an endurance horse too, and after his first ride, he was hooked on endurance too. Now, over 27,000 AERC miles and 38 years later (which includes a Team Gold Medal at the 1988 WEC in Front Royal, Virginia, and a Team Bronze Medal at the 1999 Pan American Championships in Winnipeg, Canada), Jan still is hooked on endurance, and Guy still occasionally does endurance rides with his mom.

Meanwhile, along came Leon-with-the-mule-feet four years ago. Jan started riding the horse, and decided to keep him when he turned out to be okay, and he just got better. "He's wonderful to ride, he's rate-able, he doesn't panic at anything. He's nothing unusual - he just does his job, he goes fast if I ask him to go fast, he slows down if I ask him to slow down."

Jan is pretty fond of him, and Leon of her - he'll nicker to her when he sees her out working around the farm. "We like each other, he trusts me," she says, which is good relationship to have when you almost get struck by lightning on a ride. 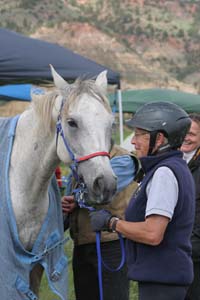 It was the World Endurance Championship in Malaysia, 2008. Jan sums up the ride as "a disaster." Jan and Leon were riding with Meg Sleeper and Syrocco Reveille in a monsoon thunderstorm at midnight, cantering through 6 inches of water on the ground when it happened. A bolt of lightning struck very close to them. "It must have gone from his steel shoes up into his body - he jumped once and hit a tree and I ended up in front of his saddle; he jumped again and I came off. He dragged me a long way - I was hanging onto the reins - long enough to think I better not let go now, and long enought to think I couldn't hold on any longer. He finally came to a stop, with me underneath him looking up at his belly. But he didn't move; he just stood there. I'd lost my glasses (and hurt her ankle), it was dark and pouring, and I think Meg had come off too.

"Eventually we got back on our horses and rode on..." Jan and Leon went on to finish the ride - but Leon was pulled at the finish for lameness. Needless to say, it was wrenching, after what all they'd been through. The chef d'equipe, Becky Hart, had thought Leon was pulled for metabolics. The lameness was so subtle, nobody on the US team could see it.

Human emotions aside, Leon came out of the race just fine, and spent his winter in Florida, where he and Jan won and BC'd a 55 mile ride in January. She had the vets go over him with a fine tooth comb, because they'd been invited to the President's Cup in the UAE. The vets couldn't find a hair out of place on Leon, and so he hopped on a plane to Abu Dhabi in February where, along with John Crandell and LR Jasuur Melika, they finished the 160-km sand ride in under 9 1/2 hours, making it look like a walk in the park.

While Malaysia was the most disastrous ride Jan and Leon have had, last year's Kentucky Cup in Lexington - the pre-ride for this year's WEC - was the hardest and most miserable. That was the ride where it unseasonably poured before, during, and after the ride, and the course became treacherously slick, and horses were traveling through inches-deep mud over much of the trails. It was considered so hazardous by officials that by noon, the hundred mile ride was shortened to 75 miles. "During one of those loops, I noticed Leon was lathering up - which was not right, because it was cold and raining, and he's never done that - and that's when I realized how hard he was working in that mud," Jan said. "So I asked him to slow down. Even with going slower, we ended up passing about 6 horses on that last loop." Jan and Leon finished 3rd, a terrific accomplishment for the conditions. 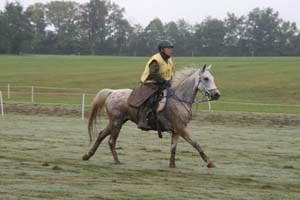 Monsoons, lightning strikes, treacherous mud - why do it?

"Endurance is such a challenge. You get to see if you pitched your training and knowledge well enough to conquer the course, or if you can ride well enough to do well. It's easier now, going faster. We used to take 23 hours to do a hundred; now we think a 10-hour hundred is slow. The agony doesn't last as long on a fast 100, but the fun does!

"I enjoy the competition. Maybe you win one ride, maybe you wait in the weeds and you win next time. It's fun or I wouldn't do it. It's hard work - you have to do your homework. And when you have a farm, it's stressful." When Jan and her partner Grace Ramsey aren't caring for and riding and training their 46-some horses, and herding the 27 cows, and baling hay, and doing everything else that comes with their JG Ranch, they continue to spend time in the UAE training horses, which they started doing in 1992 for young Shaikh Mansour of Abu Dhabi.

"It takes a family to support a person like me, and I truly appreciate them. Everybody helps - someone farm-sits when we are gone to rides and to the UAE; they shoe our horses; they crew for me; Guy still rides some of my horses if they're green and need a few rides first."

It's the challenge, it's family, and it's a nice horse with little mule feet that keep her enjoying this sport of endurance, as they aim for a slot on the US Team for the World Endurance Championship. 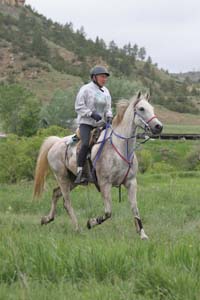