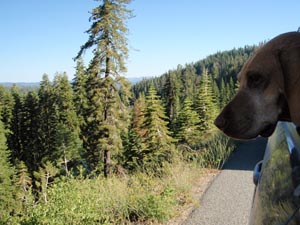 It all seemed so easy. I'd crewed for endurance riders before. I crewed for international rider Charisse Glenn at the West Selection Trials in June. Heck, I'd crewed for myself before. I know how to crew. Everybody says it's hard, but how hard could crewing Tevis really be?

6 crew people for 5 Idaho riders. Only 2 vet checks, at Robinson Flat and Forest Hill, 1 hour each. Two bags each for Nance and Steph, one for each vet check, and a 'go everywhere' pile; one bag and a small ice chest for the three Yosts to both vet checks (the bag was big enough and heavy enough to carry an extra horse!).

We had set out the gear in the correct piles the night before. All set, ready to load in a car and a pickup in the morning.

It all went to pot from there.

In the too-early hours of the morning our 5 riders - Steph and Nance, and Gentry, Laura and (junior) Chandler Yost - (and somewhere out there with Nick Warhol on Forever Dawn was The Raven!) - headed to the starting line. Their hoofbeats disappeared into the dark forest, Tevis excitement animating Rhett and following them out of our camp.
Darn, I wish I were riding!

For some reason, in camp we crew started moving piles of bags back and forth, between the car and truck, and then forth and back again, until they were totally mixed up (all except the Yosts' One Big Bag and ice chest). That's OK, the car that Kara and I and her two granddaughters were riding in would get to Robinson before the truck, and we'd have the essential items just in case the truck didn't make it. But it would all get there.

Finally packed up and loaded up and ready to leave Robie Park, we waited till exactly 5:30 AM as instructed by the Tevis Cup Committee to start our engines (though many were already driving out). We joined the line of trucks and trailers flooding out the back road to Truckee as dawn crept over the mountains.

The fine Sierra Nevada dust - the dust that horses and riders would breathe for 100 miles and at least 18 hours - was rising like a film in the air as our vehicles snaked down the logging road.
I'm glad I'm not riding!

To get to Robinson Flat, which is 36 miles by trail for the riders, we had to drive west almost all the way to Auburn (the final destination of the ride, and where the men dropped off the trucks and horse trailers) before turning back east to drive back to Robinson - a total of around 150 miles. The good thing about that was we had time for breakfast - a Starbucks stop to start the day!
I'm glad I'm not riding!

As we wound our way along a long ridge-top toward Robinson Flat, the deep canyons and granite cliffs of the Sierra Nevadas lined with pine and fir forests flanked our sides, and I thought, Darn, I wish I were riding!

There was already a line of parked cars at Robinson Flat lining the single-lane road, and the volunteer traffic director had us wait in line for a while before we could drive in to the vet check and drop our things off. Kara dropped me and the two kids and our gear, then went to park the car down the road. The heat was already getting to me (in the 80's in the sun, at 9 AM) as we three girls struggled to get the silly aluminum cart together so we could roll our gear to a crewing spot.

We never did get the cart completely unfolded; we stuffed what we could into the thing, and Burkleigh helped me pull the cart while Kennedy steadied the load and carried an armful of things on her shoulders.

Other crews were already set up, staking out spots, filling water buckets and heading to the in-trail, mixing feed and setting out hay for their riders. More trucks were dropping off crews and gear. It was starting to get busy. 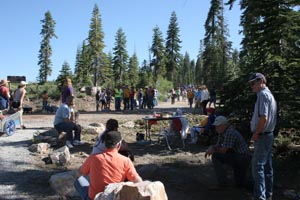 The girls and I struggled with the cart - for some reason we picked an uphill spot - until some nice young savior man came and helped pull the cart up the thick dirt trail while I pushed. Hmm, a lower spot would have been better, but, here we were.

We unloaded our gear (the men would bring the rest when they arrived), and boy was I already hot and soaked with sweat.

I could picture Steph and, Nance, cruising on their mighty steeds Rhett and Jazzbo, trotting along the ridge to Elephant's Trunk with that stunning view off both sides of the trail...
Darn, I wish I were riding!
I also pictured the very unforgiving rocky, slippery, boggy trail through the Granite Chief Wilderness they were passing through, and all that choking dust... And it might be even hotter out on that trail...
I'm glad I'm not riding!

I ran to the in-timers with my camera, camera, camera, notepad, recorder, and iPhone camera. I can't ever just do one thing at once (like crewing), I had to be reporting too, for Endurance.net and the live Tevis webcast.

Some of us who were waiting could get cell reception, so we could check the tweets going out, but the "follow your rider" and vet stop results on the Live Webcast page were inaccessible by iPhone, so most of us had to rely on swirling rumors that this horse or that horse was pulled at Red Star, or Lyon Ridge; that a record number of horses were already pulled (! hopefully not our riders!); that it was so hot the riders were an hour behind last year's time coming into Robinson; that a horse fell in the bogs and was wedged upside down...

One of the sucky parts of waiting as a crew at Robinson is that you really don't know what's going on out on the trail. 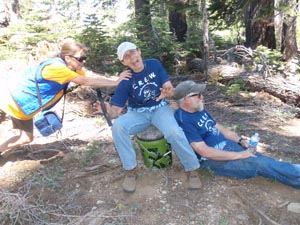 John Crandell and Heraldic, Shannon Constanti and LR Bold Greyson (owned by Crandell), and Rachel Shackelford and BR Cody De Soi are the first ones into Robinson. The horses vet through fine. Melissa Ribley and Monique (second, and the Haggin Cup winner last year) are next - and Melissa's face and shirt are covered in blood. Her face was attacked by a tree on the trail. She vets her horse through and makes sure everything is ready to go out before she's stitched up by someone during the vet check (30 stitches was the rumor).

I catch other riders coming in, 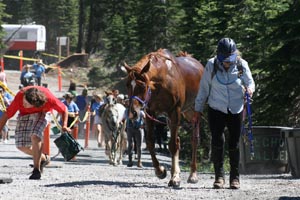 watch some cooling off, 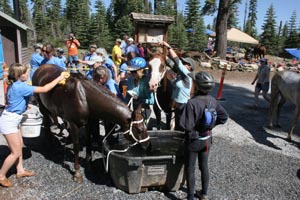 pulsing down, and trotting out, then go check on our crewing spot. The men have arrived, and our gear has been moved to 2 different spots. I pack my cameras away, and go to join the rest of our crew waiting for our riders.

That's the thing: waiting. You wait, cheer for other riders coming in, 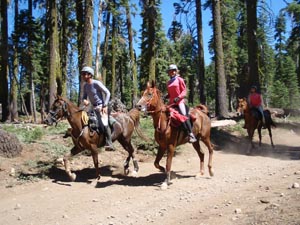 look in vain for your own riders... and wait. Look at your watch. Jump up when you see a chestnut and bay horse at the far end of the road... and sit back down when you see it's not Nance and Steph. Wait some more. Look at your watch some more and... not start to worry yet, but look at your watch again and again and try to slow down the big hand. Suggested in-time for Robinson was 11 AM; cut off in-time was Noon. We arrived last year around 11:30. The 3 Yosts came in around 11:15 - and they'd been about 10 minutes behind Steph and Nance leaving Robie Park. "They had trouble coming down at one of the checks" was the rumor... "They're about 15 minutes behind, we think." Coming down - what, the trail? Horse pulse rates? What?

OK, no reason to worry just yet, but more riders came in... and no Nance and Steph. Finally, about 11:30, here they came, giving each other a high five as we cheered them in. 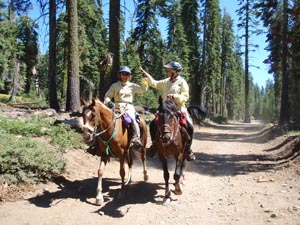 But there was a little reason to worry. Pulse criteria here was 60 bpm. And I must say I eyed my watch anxiously as it took Rhett a long time to come down (and it worried me about the hot canyons coming up for him.) We poured copious amounts of water on him, then brought him and Jazzbo into the shade to... wait. Jazzbo's pulse was down, but if he went to vet through without Rhett, they'd both be screaming (by now they were total Bondo Boys) and their pulses would shoot up to over a hundred. And we waited some more for that pulse to drop down, as we kept our eyes on the heart rate monitor - 78, 76, 74, 80, 83, 80, 78, 78, come ON, DROP!, 76, 72, 72, 72... and the clock kept ticking. Finally his pulse hit 64 - good enough to walk into the pulse box with Jazzbo - (must have taken a good 20 minutes... which now put Steph and Nance at 10 minutes ahead of cut off time...) and the horses vetted on through.

And then, things went downhill fast as we climbed uphill to our crew area.

Dang, I wish I were riding!.

You get the picture.

It was determined that the food and drinks for Steph and Nance, and Rhett's grain, never made it up from the truck - which was parked waaaaaaaaay down that hill. The men left to go get the food and water. Which was hot when it arrived.
I hate crewing, I so wish I were riding!
I filled Steph's water bottles with hot water, for those hot canyons coming up.
But I'm soooooo glad I'm not riding!

There's probably much more to the sordid Robinson Flat Crewing hour hold that I've forgotten now, and anyway, after the worst most inglorious crewing job ever, we did manage to get our riders off on time for the second 32 mile segment of the Tevis trail to Forest Hill. Nick Warhol and The Raven 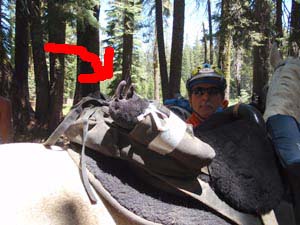 were out right after them. Go Nance 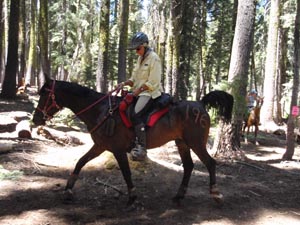 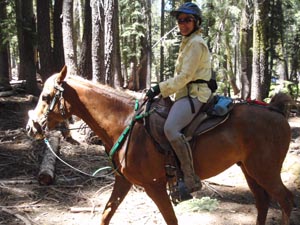 and Nick and The Raven!

The next vet check would be easier and better.


(You can see Steph's rendering of the first 2/3 of the trail - including the aforementioned Robinson Flat Vet Check-From-Hell - here!)
Posted by The Equestrian Vagabond at 9:51 PM