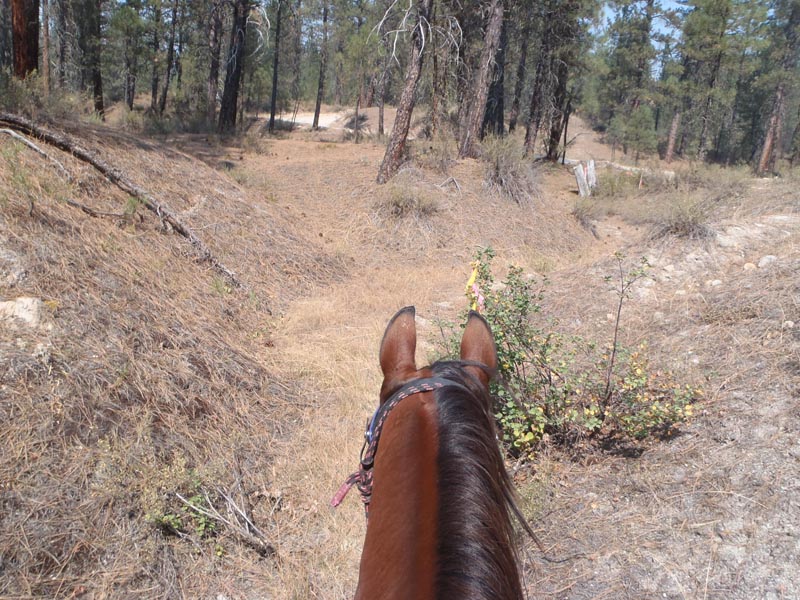 Centerville was a hot town in the old 1860's mining days: a population of around 3000 people, with a hotel, stables, stores, and saloons. And presumably other kinds of hot parlors, to keep those miners entertained after they were tired of digging out the $250,000,000 in gold in the area over the next decade.

It was hot in Centerville over the 2017 Labor Day weekend, but that's just because of the contrary weather compounded by plenty of smoke in the air. A good group of endurance riders gathered for the SWITnDR fundraiser ride, Old Selam, back in its proper place after two years' absence. Ridecamp was on Cini Baumhoff's family property, and lined with signs that said Private Property, No Camping and No Mining, because there still might be some gold diggins' under our horse trailers.

I spent Saturday shooting the ride (photos coming on SmugMug soon) and guarding a gate to keep out those wood-lusting woodcutters. 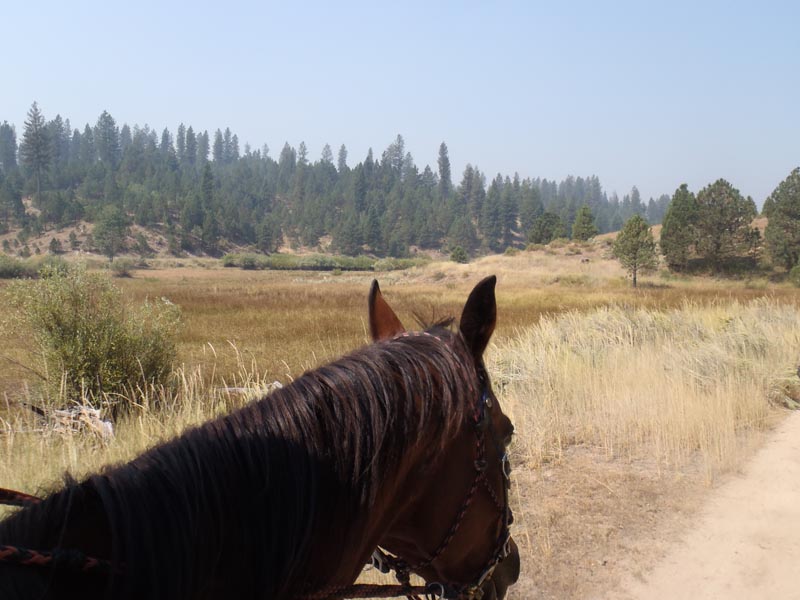 24 started the 50-miler, with 22 finishing. Layne Lewis won aboard Royal Immage (ride time 6:29) by a second over Debbie Grose and Jack, who took Best Condition. Layne didn't show for BC, because she went back out on an extra loop, as good heat training for next month's AHA 100 in Oreana. Tough rider and tough horse! The rest of us were melting in camp as the temperature hit around 100 degrees.

20 started the 30-miler, with only one near heat-stroked rider option. Kathleen Hite won aboard American Ally EF in 4:10, and also got Best Condition. Jill and Chris Haunold finished second and third on the 'Curly Brigade' (their Curly horses), Penny's Isabele and CC Handsome Dark Knight, in 4:24 and 4:25.

I psyched myself up to ride in the heat on Sunday. Steph/Smokey and Carol/August hauled Steph's standardbred Hillbillie Willie from up the Pickett Crick to the ride for me. It was only Willie's third attempt at a 50, after finishing his first one at City of Rocks in June, and getting pulled very anti-climactically at Top O' the World in July on the first loop of the first day with sore feet. He'd be wearing easyboot gloves over his shoes at Old Selam, which had worked for conditioning at home, but the biggest trick is keeping those boots on over shoes once they get wet. And we'd have quite a few creek crossings to deal with. 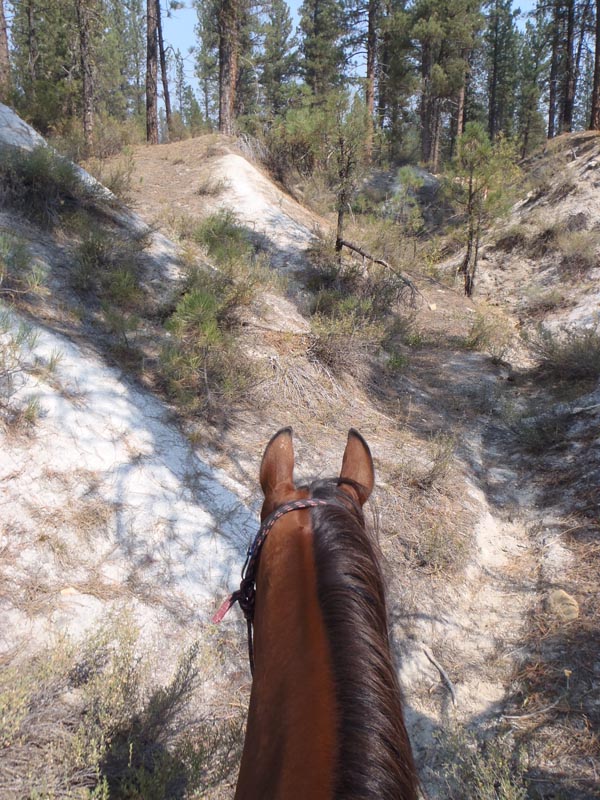 I hadn't ridden Old Selam since 2011, and I was thrilled to be back in the forest, despite all the smoke and pretty much no views from the ridges because of the smoke, and despite the heat.

Sunday the 50's had two 25-mile loops, and we made it comfortably through the first loop before the heat started settling in. Willie loved leading on the overgrown two-track forest roads, ducking under the branches (while I got whapped in the face, because he's so tall it's difficult to throw myself all the way down on his neck, and just easier to take the hits) and zooming around blind corners. I was hoping to Moses we would not run into a big moose in our path around one of those corners, and thankfully we didn't!

It did get hot at places on the second loop. If you kept trotting, you had a bit of a breeze. If we did walk, we didn't do it in the sun, only in the shade. The water sources were a bit spread out for such a hot day, and several times, Willie was looking out for water and wanted to take a detour off trail anywhere that it looked like there might be a creek, because he's a canny outdoorsman horse now.

But just about the time we, horses and humans, were about to die for lack of water to drink and dunk our clothes in, there appeared water troughs or a real creek to bury our heads in. The biggest treat ever were the coolers full of iced water and otter pops, dropped off by ride management at two different places on the loop - delightful treat! One of the creeks and crossings was obviously part of the beaver dam Liz had been talking about when she marked the trail. By Sunday the water had risen to over the horses' knees, which was fine with the horses. They all did some splashing and thinking about dropping down in the creek (and Willie dropped to his knees wanting to roll in the sand after we got out!)

I rode Willie out of the creek, so I could stand on the edge of the water and dunk my vest and helmet. I ended up getting a helmet full of beaver water in my eyes… we all know that drinking beaver water can give you giardia (it is known as "beaver fever"); I will let all of you know later if you can soak in giardia through your eyeballs.

Our Pickett Crick team of 3 finished in a ride time of 7:35 and Hillbillie Wonder Willie ended with a pulse of 48. 48 in that heat! Mine was way over 48. Willie's best most favorite reward before, during, and after the ride was the water/wheat bran/oats/carrots slop that he would bury his face in.

15 started the 50, with 14 finishing (one Rider Option) with Oregon riders taking the top 3 spots. Kristen Maholland and HCC Elassar won in a ride time of 6:34, with Darlene Anderson and TER Ramone the mule she stole from Max for the weekend a second later. Third place Elayne Barclay and Merlot's Kwest got Best Condition. Elayne has had a terrible time lately, with her other horse Fletch missing in an Oregon forest for 30 days. Elayne almost didn't come to Old Selam because of that, but this was a nice break and a welcome treat for her. 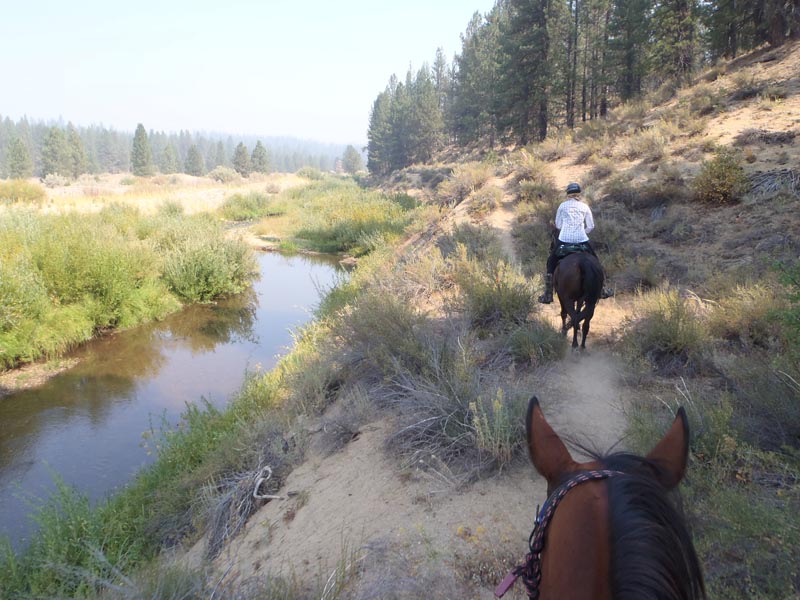 16 started the 25 miler with 15 finishing. Karen Steenhof and Riley won first in a ride time of 2:58, out-finishing Connie Holloway and DWA Saruq, and Junior Sarah Holloway and Noble Desperado by a minute. Riley got Best Condition.

It was a great testament to all the riders taking such good care of their steeds on such a hot weekend.

And it was an enormous SWIT group effort to put the ride on. As Beth said, I won't name any names either, for fear of leaving somebody out. But you know who you are." Great job. The trails were fabulously marked, the footing was pretty awesome the entire ride, the forest was a delight, and it was just all around a good, hot September ride. If you have to be out in the heat, you might as well be endurance riding! More photos and such at:
www.endurance.net/international/USA/2017OldSelam

Posted by The Equestrian Vagabond at 7:04 AM 2 comments: