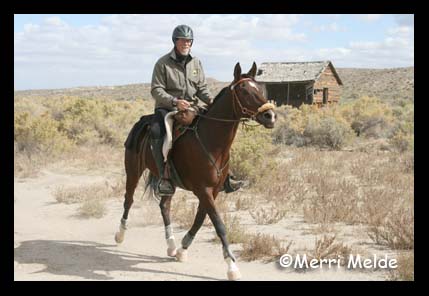 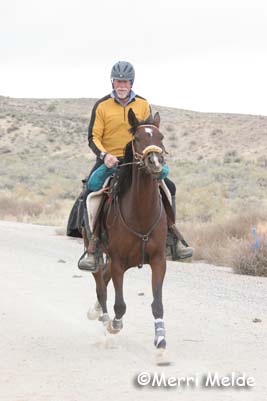 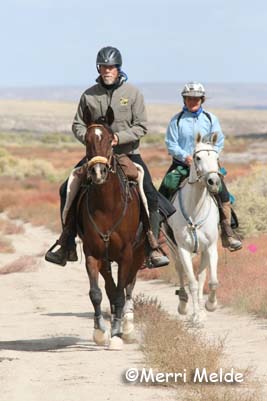 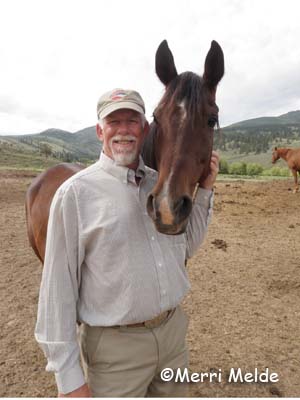 Posted by The Equestrian Vagabond at 2:05 PM No comments: 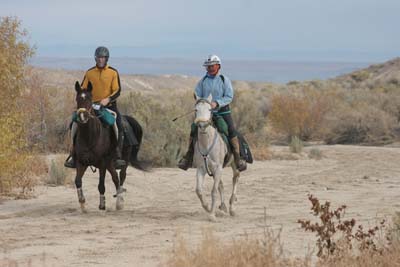 But the couple also combine their diverse talents in a unique clinic offered at their Elkhorn Mountain Ranch outside of Baker City, Oregon.

Naomi has been a TTEAM practitioner since 1990. Known as the Tellington-Ttouch Method, TTEAM is a specialized approach to the care and training of horses (and other animals), using heart and hands to develop trust and create a harmonious relationship that changes unwanted behavior and improves body awareness and coordination. The Tellington Method involves gentle body work using fingers and hands with varied methods of pressure in circular, sliding and lifting movements.

Along with body wrapping - which maintains a constant connection with the horse's entire body, increasing sensory awareness and providing a constant, calming effect - TTEAM is used to improve a horse's self-carriage and help engage its hindquarters, lower the head and lift the back, increase range of motion and stride length, improve coordination and balance, lateral flexion and confidence, discover sore or sensitive areas, help speed recovery from injuries, and overcome fear or resistance.

Naomi discovered the effectiveness of this method when she used it - or tried to use it - on her AERC Hall of Fame mare, Mustang Lady. They'd completed one day at a multi day ride near Las Vegas in February of 1989, when Lady became sore afterwards because of all the deep sand on the trail that she wasn't used to.

"I'd recently been to a conference where Linda Tellington-Jones was speaking, and I remembered some of the things she talked about and demonstrated," Naomi related. "I didn't know what I was doing on Lady, but I tried to copy what I'd seen Linda doing."

It worked - Mustang Lady was sound enough to start and complete the next day's 50 mile ride. From then on, Naomi was a believer, and she started attending TTEAM clinics. She became a certified TTEAM practitioner in 1990, and has since incorporated it into her endurance riding and conditioning.

Naomi's husband Lee, a Certified Natural Balance Farrier, has also found the TTEAM techniques useful in his shoeing and trimming practice. Sometimes he'll apply a body wrap to the horses he works on, and he'll use TTouch methods to calm them down; and he'll use leg exercises to encourage the horses to pick and hold up their feet with little resistance. You can see the effect of Lee's calm energy and hands-on touches when horses put their heads in his chest and start to close their eyes. 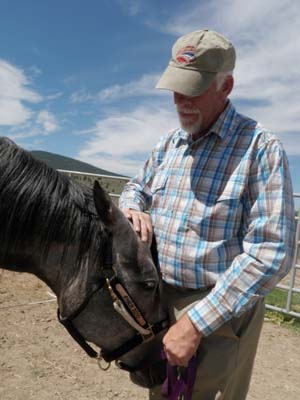 Naomi and Lee use the TTEAM exercises as part of their pre-endurance ride warm ups, to get their horses more relaxed and supple. During the vet checks, they often use TTEAM techniques to help relax their horses, stimulate their appetites, and increase blood circulation.

In addition to practicing TTEAMwork on their own performance horses, Naomi holds private TTEAM clinics, like the recent one in June hosted at their Elkhorn Mountain Ranch near Baker City, Idaho, in June. Student devotees from Chile, Netherlands, Scotland, Wyoming, Oregon, and Idaho attended. 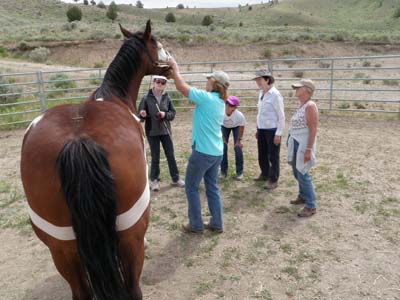 Liz came to continue to learn "to have a better relationship and rapport with my horses that is no-stress," she said. "TTouch is a great way to communicate with my horse because it's based on giving the horse credit for having a brain, and thinking, rather than imposing some kind of agenda, and I find it really effective."

Naomi first demonstrated, then coached students on various horses in such TTouch techniques. Body wraps were applied to each horse, while different areas were practiced on: body work, ear work (used either to stimulate, or calm a horse), tail work (bending and stretching), mouth work, and leg exercises (range of motion). 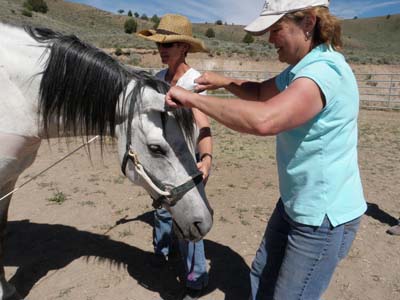 The clinic also included her husband Lee's presentations of Natural Balance principles and balanced hoof trims, explaining the anatomy and balanced trim of the hoof. Neighbor Cheyleen Davis's enthusiastic mini-lecture and instruction on parasitology was fascinating - students each eagerly collected and prepped samples of horse poo for examination under microscopes (only one single parasite egg was found in 6 horse samples!). The clinic concluded with a day of mounted work featuring Connected riding with correct posture and seat.

"It's all about having a happy, healthy horse," Naomi said.

The value of the clinic wasn't just the knowledge gained by the participants, but the camaraderie between the students and teachers during the clinics and in the evenings. Fast friendships can form with a group of dedicated horse people who believe in the same principles of having better relationships with their equine partners.

Naomi is such a capable, encouraging instructor whose earnestness is contagious to her pupils. it's no wonder people traveled halfway around the world to continue learning more from her about this gentle method of working with horses. Posted by The Equestrian Vagabond at 6:08 PM No comments: