Posted by The Equestrian Vagabond at 10:26 AM No comments:


Posted by The Equestrian Vagabond at 10:31 PM No comments:

Happy To See Me


Posted by The Equestrian Vagabond at 5:34 PM 3 comments: 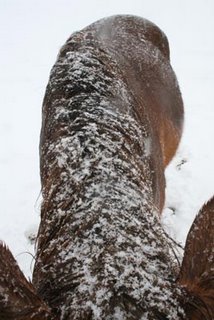 Carol picked me up at the Boise airport yesterday, after returning from a sunny, warm winter month in Arizona.

I had just missed another 10" snowfall in Oreana just after I left, and it had continued to snow on and off all month. Cold, white, ice, melting, mud, more snow, always cold, no riding. The ground was solid white flying on my last leg from Salt Lake City to Boise.

As we got near home, I could see last remnants of snow sticking to the north-facing hills, but, Carol said with great relief, "I think it's over - spring is finally here!"

This is what I woke up to. 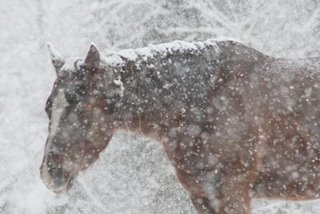 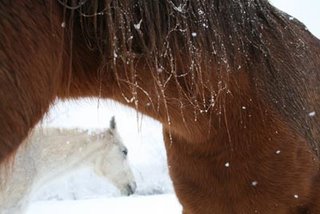 Carol is ready to strangle me. 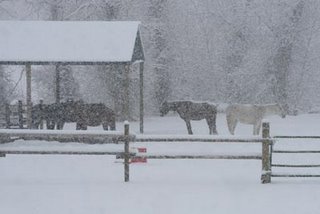 Posted by The Equestrian Vagabond at 8:51 AM No comments: 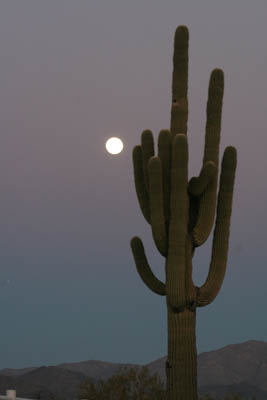 My last night in Arizona I was treated to an outstanding natural phenomenon I haven't seen in a long time. The lunar event was totally eclipsed - obliterated - by a CRACKING lightning storm.

I was the last one up at night, watching (sadly) my soap opera, when by a great flash of light through the windows, I became aware of a storm going on. It had probably been gong on a while - I'm fairly deaf to thunder - and by the time I jumped up and peeked outside in the dark, the cold wind was swirling, the electricity popping, and big raindrops just starting to spatter the sand.

Rhett had to be blanketed - he had been the sickest, and he's partially clipped.

And here was my dilemma - I'm afraid of lightning.

I've been caught out in the middle of 6 bad lightning storms - 1 of them with three horses on a pack trip - and lightning just terrifies me.

But Rhett had to be blanketed... so I just couldn't think about it, I just ran out, grabbed his blanket, and ran to the pen.

Bolts struck the ground to the west and north, sheet lightning strobed in all directions of the compass, blinding flashes lit the earth brighter than day, and finger bolts split the sky, with booms and sharp cracks shaking the sky from all directions and overhead, the kind that shook and rumbled your insides.

I cringed and ducked with every flash, clenched my teeth. Holding my breath helped.

I climbed the fence into the pen with the blanket; the wind whirled around, making me look like a black ghost. Rhett though I was coming for another stealth antibiotic shot - Rusty and I usually came out this time of night - and he wanted nothing to do with me and his scary blanket on this dark and stormy electric night.

I moved close, he'd move away. Jose stuck his nose in my face, Put the blanket on me! I got close to Rhett, he dodged away; I got close, he dodged away - as bolts ripped across the sky and my knees shook. "Oh please Rhett, please, please, I'm scared," and Rhett stopped and stood still, in the howling wind, lightning bolts and big fat raindrops, and let me put the blanket on him.

I ducked at the flashes (really, it doesn't help), and my trembling fingers hooked his snaps, and I used the bright flashes to see what I was doing. I gave the two of them a quick pat, then leaped over the fence and sprinted back to the safety of the house.

But still, I was fascinated, and stood out there (peeking out from under the roof, feeling safe) and watched the dazzling electric display. I expect the moon eclipse was good - but I wouldn't have traded this show (and adrenaline rush) for it.
Posted by The Equestrian Vagabond at 7:22 PM No comments:


Posted by The Equestrian Vagabond at 2:36 PM No comments: