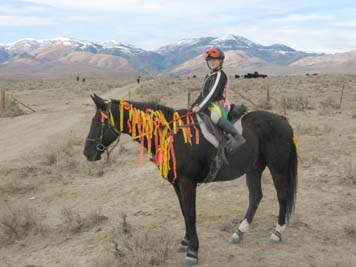 People have been discussing new ways to recruit new endurance riders into the AERC fold.

One way is to have a horse-crazy endurance aunt (one named, let's say, Connie), who brings her 9-year-old niece (one named, say, Sarah) out to ride on, say, a former international FEI competitor and now gentle giant of a horse named Krusty, and takes her out in the desert to ride and ride.

Connie's endurance infectiousness of course quickly consumes Sarah, and it's clear that you can't separate the goal of Sarah's first endurance ride, whether it's mostly Connie's or Sarah's idea.

Sarah's first endurance ride, the LD on Day 1 of the Owyhee Hallowed Weenies was not easy. 30 miles of trotting is a big jump from summer weekend lessons back home, and from the 8-10 mile training rides a long two months before Sarah's endurance debut. 30 miles was a long day of tiredness, sore muscles, and a saddle that fit Krusty but not quite Sarah's short legs. Crossing the finish line was a huge accomplishment, but that first endurance ride was quite enough.

However, by the time the awards dinner rolled around, and Sarah had had time to rest, and she heard all the other riders' stories (including several other juniors, 2 with whom she rode), and she heard all the cheers from fellow riders as she got her finish award, Sarah was up early the next morning for Halloween, Day 2 of the Owyhee Hallowed Weenies, decorating Krusty's and Finneas' mane with ribbons as costumes. 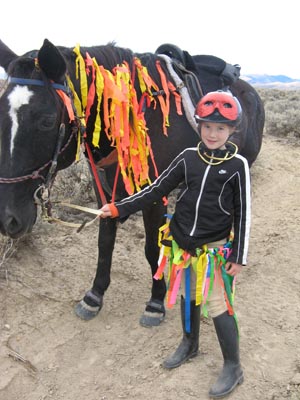 As it goes with all seasoned multi-day riders, Sarah felt better and got stronger during the 25 miles of day 2 (and rode in a better-fitting saddle). Had there been a Day 3, she would have done it.

Over Halloween in southern Idaho, another endurance addict was created.