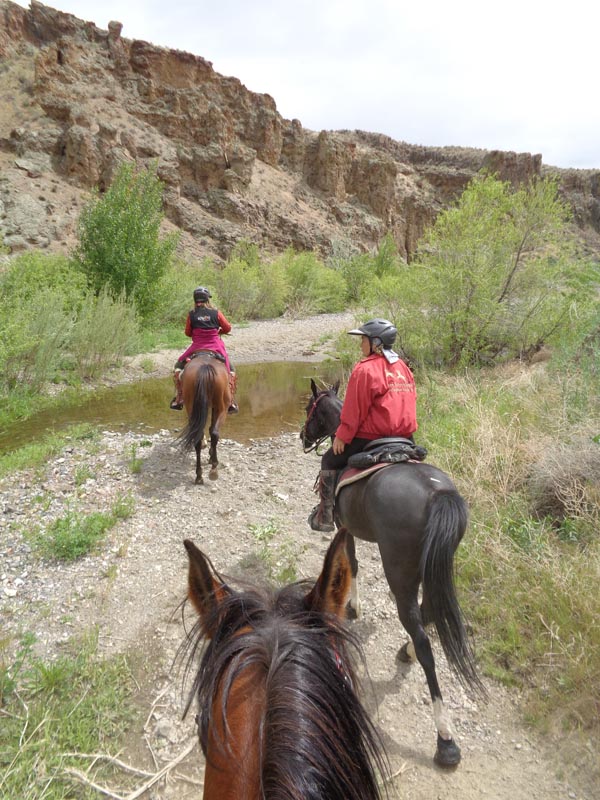 With Smokey and Hillbillie Willie sitting this one out, Pickett Cricksters August and DWA Saruq and Dezzie headed to the Owyhee River Challenge 55 near Homedale, Oregon, with humans Carol, Connie, and Merri in tow (and Regina towing us all).

Connie's goal is Big Horn 100 with Saruq and Dezzie, and as Sarah couldn't make it for this ride, I (with of course The Raven) was the substitute jockey-du-jour on her horse Dezzie. 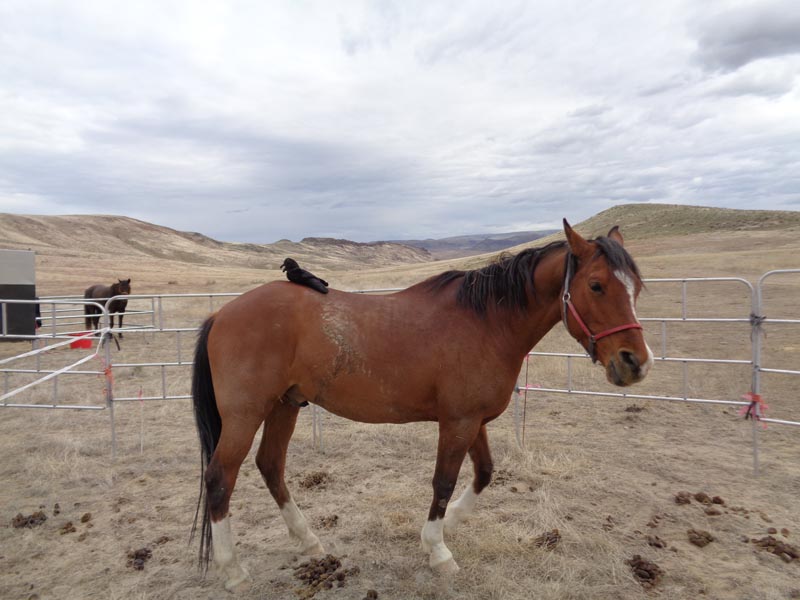 There were some reeeaaaalllly tough Owyhee suckers that participated in Friday's (possibly first-ever-in-Oregon) CTR ride, which Lucie Hess from Missouri flew out to oversee. Ann Kuck stole the win on that one, her first ever CTR ride, with her Dirty Martini - the horse, not the drink.

The CTR riders had a deluge of rain and wind, the wind of which continued on into Friday night, keeping most of us awake most of the night and wondering what was in store for the 25 and 55 milers the next day. When - amongst the wind gusts battering the truck and trailer - we heard the rain start to fall at 3 AM, Connie and I got up to put rain blankets on the horses. 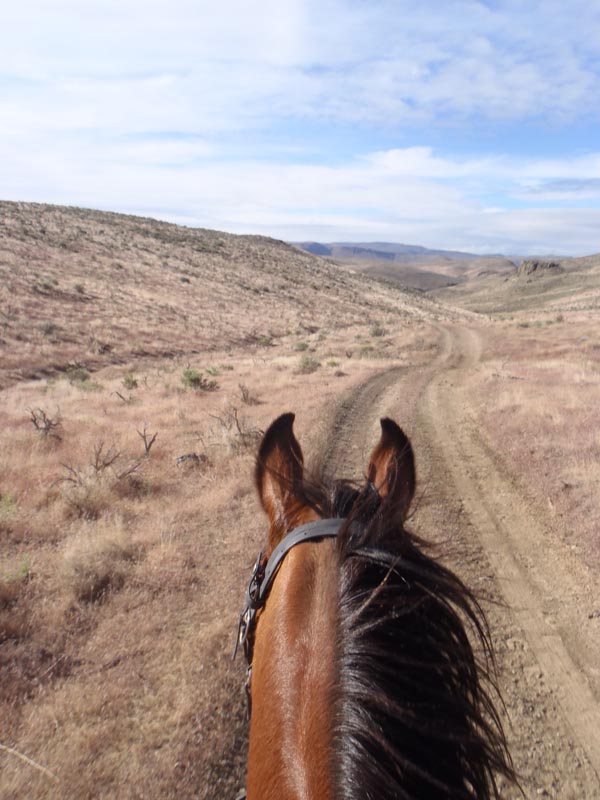 As I laid awake trying unsuccessfully to fall asleep (I kept almost sleeping, almost dreaming that the rest of camp was unable to sleep and were all up and standing in a 3 AM breakfast line), I was pretty sure the weather must be better tomorrow. And since we were psyched up for bad weather, it was better the next morning - we only had wind to contend with most of the day. Which wasn't a bad thing, because it would have been warm in the afternoon without it. 22 of us riders climbed aboard for the 55-miler start at 6:30 AM on two big loops, with an hour vet check in base camp in between. This year ride manager Karen Bumgarner was able to route us into and along the pretty red rhyolite canyon of Succor Creek, a trail we 3 had never been on before. These series of red canyons that run through the Owyhee Canyonlands country are a pretty well-kept secret, which many of us would kind of like to keep, unless of course you're a horse rider and/or you appreciate them and will take care of them.

We 3 leap-frogged numerous riders throughout the day. We 3, and a few other riders, would like to publicly give a thank-you shout out to the younger and much more agile Kaili, our gate girl, for opening all the gates for us while we were riding with her. Jessica Cobbley deserves her own special shout-out for experiencing probably the most adventurous ride of the 55, substitute jockeying for husband Mike, Talladega's regular rider, and experiencing a couple of Dega meltdowns, an unintentional splashdown in a creek, a broken stirrup, and another Dega meltdown or two.

Scariest part of the ride was the small herd of totally unintimidating longhorn cattle. Sure, Dezzie has seen cows before and doesn't care about them, but these bovines had Long Pointy Horns and he did not want any part of them and was rather appalled to have his picture taken near them! 22 started the 25-miler, with Dudley's friend Boogey getting the win with rider Simone Mauhl in a ride time of 2:41. They just edged out Joan Zachary and Chico, and the entire Heart to Heart mule gang (7 of them). Boogey got the Best Condition award. There was only one rider option pull in the LD. We had one of the best potlucks after the ride, and some good ride awards, which included a bottle of Winky Wash (for real), which was great timing as it came in handy for Monday's spring vet visit of teeth, sheath, and shots! 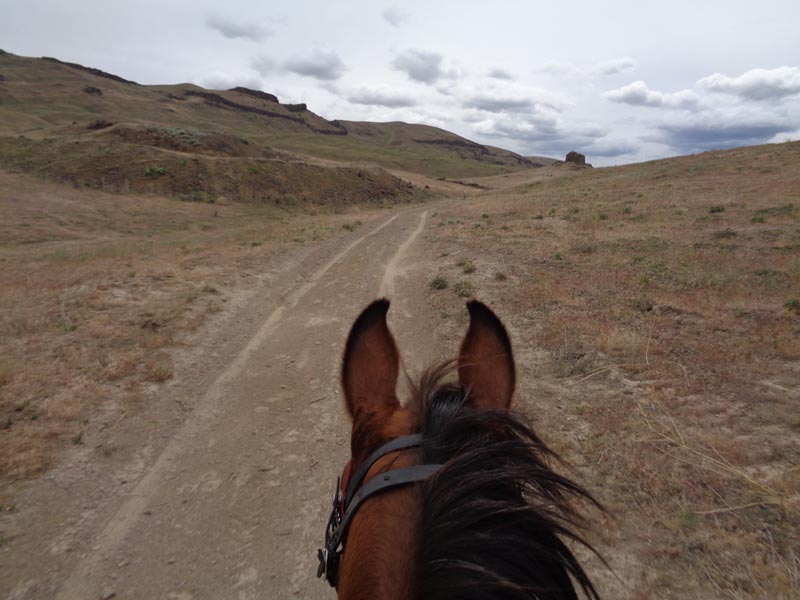 More photos and stories from the ride at:
www.endurance.net/international/USA/2018OwyheeRiverChallenge

Posted by The Equestrian Vagabond at 6:50 AM No comments: 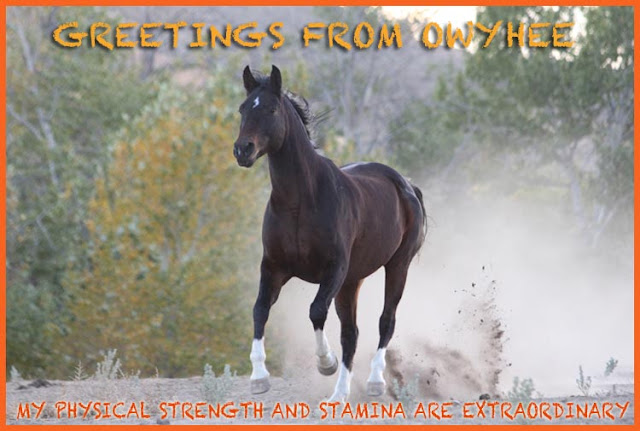 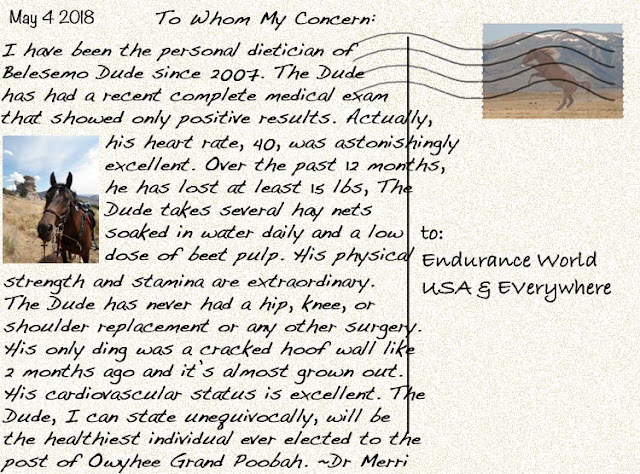 Posted by The Equestrian Vagabond at 11:38 AM No comments: Year 1 for Layne Simmons, taking over as ride manager for the annual spring ride in Idaho's Eagle foothills, saw lots of cancellations because of the crappy weather (heavy Friday night rain = mud), even from riders who'd shown up planning to saddle up Saturday morning.

Year 2, Layne got the hurricane. More riders toughed that one out, but it sure turned out to be nice for:

Year 3, with the perfect weather and good attendance for the Eagle Canyon endurance ride. 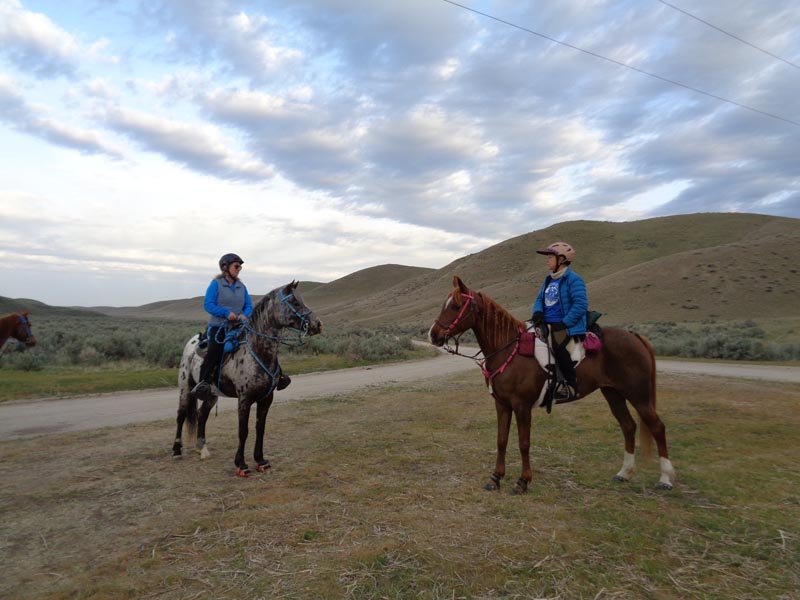 A portion of this year's ride 25 and 50-mile rides would be donated to a good cause.

"I have decided to take to heart some of the discussions that are occurring in my region (PNER)," Layne posted, "and honor one of our fallen sisters from the proceeds of our ride. We will be giving 10% of all proceeds to the Women & Children's Alliance in Honor of SueB……" Who is SueB?  Susan Elaine Brubaker Newby died in 2008 during a mysterious horseback riding incident. After her death, family and friends realized that SueB – her nickname – was likely in an abusive marriage. SueB’s sister, Marjory Sente, and friends, Leslie Hampe and Teresa Andrew, turned to the WCA as a way to honor SueB’s life and increase awareness about domestic violence. Their hope: to help other successful, smart, beautiful women like SueB leave these relationships before it’s too late.

“Don’t wait until your sister, daughter or mother is a victim of domestic abuse or sexual assault,” Sente said. “Step forward now and make an investment in the WCA to raise awareness about domestic violence.”

A white cross perches on the canyon rim that we ride by. SueB would have been happy to see the riders out and thinking about her on this fine day.

23 riders started the 50 at 7:30 AM, with a number of them bucking on the way out. The one going out in the lead got my attention, Max Merlich on Xtreme Surprise: buck - "Hey!" - buck ' "Hey!" buck - "Hey!" These Oregon invaders, Max and "Rio", and Kristen Grace and her lovely well-behaved stallion HCC Elessar won the ride (Kristen getting the honor of walking over the finish line first) in 6:22, with Kristen's "Monster" getting Best Condition. Third place finisher Jeannie Simpson and SWA Ibn Daraah finished over an hour later. Another bucking horse provided a little entertainment mid-day… and nobody was surprised that it was Taledega, only 10 minutes into his second loop, sans rider Mike Cobbley. "He started to go down to roll," Mike recounted later, "and when I stepped off I slipped and fell, and Dega jumped up, realized he was loose, and took off." Taledega came galloping down a steep hill into camp. The naughty horse was rounded up, Sally Tarbet led him back up the trail to meet Mike, who was hoofing it back down the trail to find his mount. Mike loves Dega, but I expect they had a heart to heart discussion about the state of things. Mike remounted and sent him trotting back up that sand draw at a stiff trot!

18 finished the ride, with the turtle award going to Trish Frahm aboard her cute Appaloosa, BPR Jamine Blu, in the mare's first 50 mile ride.

All 18 starters finished the LD, with MacKenzie Cronin and Misty getting first place in 3:14. Second place Joan Zachary aboard her Paso Fino Chico (3:21) got Best Condition.

Layne's plans for a coffee truck for the ride fell through, "but wait! We have Richard the Coffee Mule instead!!" "I’m sure many would attribute coffee and donuts to their success  :-) Richard spectated and supervised, though we did a short ride at the end."

Layne concluded, "Aside from some small trail sabotage from cows and humans, all went well. The weather cooperated this year, which was a plus, and we had a nice camp fire to round it out."

And the ride raised $931.74 for the Women and Children's Alliance in SueB's honor. "You all are AMAZING!" Layne said. "Thank you all so very much for supporting this cause."

More on the ride at:
http://www.endurance.net/international/USA/2018EagleCanyon/

Posted by The Equestrian Vagabond at 7:31 AM No comments: