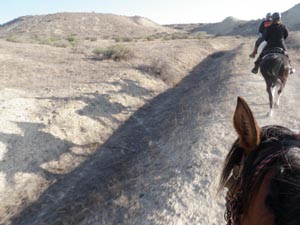 The morning trail started with dust 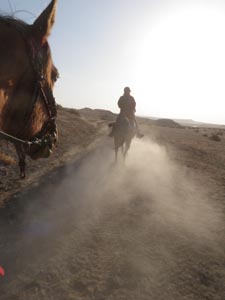 and long morning shadows over the dry Owyhee desert. Horses didn't drink so much water at the Tough Sucker I, but most of the water tubs and sponge buckets were near empty on this hot ride, where one thermometer at Ridecamp showed 87° in the shade of a trailer. A decent breeze kept trail heat at a bearable level. 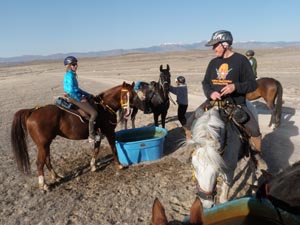 Hay stops, particularly at Hallelujah Junction were a treat and a rest stop on trail for the horses. Rhett and Steph, Jose and I posed at our favorite overlook of the Snake River. A breeze kept gnats at bay along the Snake River. Nance fetched water for all of us to pour on our hot horses. 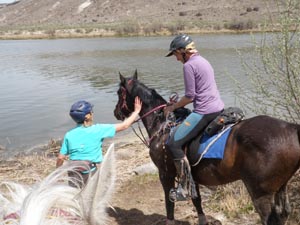 She tripped over that rock at her left foot, but John missed the shot! 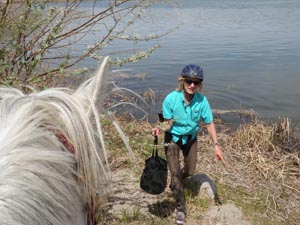 Hot, dry, windless and dusty on the south side of Wild Horse Butte, we followed the Oregon Trail, to another welcomed water stop. Coming up out of the Birds of Prey Badlands, 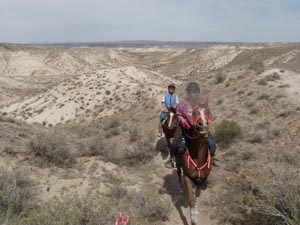 we followed the last of the dusty trail home, back to camp. 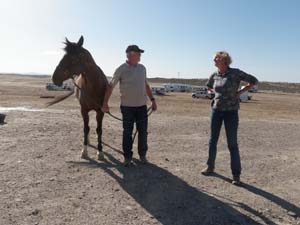 20 of 23 finished the 50-mile ride. It's usually not a surprise when heavyweight rider Lee Pearce and 14-year-old Fire Mt Malabar win Best Condition, which they did again… but what was surprising is that it was Malabar's 30th Best Condition award. Could that be an AERC record? The pair won the National Best Condition award of 2011. Malabar is a son of the redoubtable 7000+ mile, 1992 AERC Hall of Fame horse Sierra Fadwah +/, and knowing how tough Sierra Fadwah was, and how outstanding his get turned out to be, Malabar and Lee still have a lot of good miles of trails and Best Conditions ahead of them.

Posted by The Equestrian Vagabond at 5:34 PM No comments: 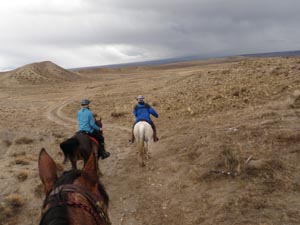 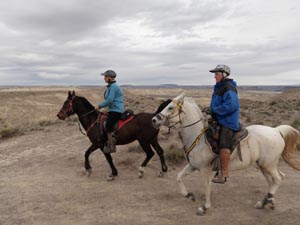 An imaginative Owyhee trail marker
Posted by The Equestrian Vagabond at 12:56 PM No comments: Posted by The Equestrian Vagabond at 9:09 AM No comments: