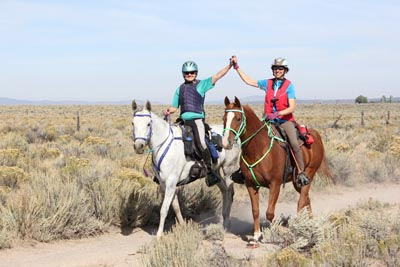 The Oregon 100 around Brothers, Oregon, is one of the longer running rides in the country, and ride manager Charleen Farrell, aka "Sharkee," has been there for most of them. Robbie Pruitt started ride managing in 2002. It's been a fundraiser for the Pacific Northwest since 2005.

With not all that many 100 mile rides in existence anymore, this ride sits pretty sweetly in the ride season when it's cooling off in the high desert, and it's quite do-able for both experienced riders and beginner 100-mile riders. It's an elevator ride, so if you're even *thinking* about attempting a 100 for you or your horse (or both), you can choose to ride 50 miles then elevate to 75 miles if all is going well, then elevate again up to the 100. You could also choose to ride a 25 miler or a trail ride. Or just come volunteer! The trails are all two-track roads - either soft and smooth, or negotiable rocks underfoot, and though there are some gentle hills, it's one of the flatter 100 mile rides. And the full moon was a bonus for those that rode into the night.

A whole spectrum of endurance riders showed up for this year's ride: locals and invaders (from as far away as California, Nevada, Canada), beginners and veterans (think a Tevis Cup winner, a Haggin Cup winner, and a Mongol Derby winner!), and youngsters as young as 9 and oldsters as golden as 86! 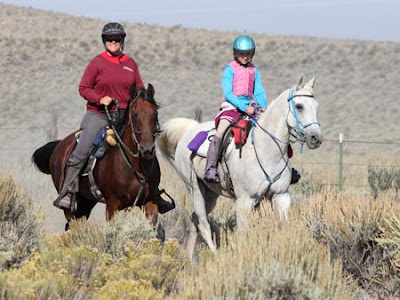 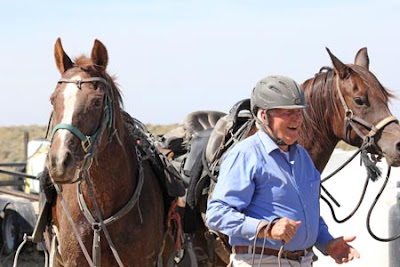 86-year-old Terry Doyle, from Alfalfa, Oregon, just down the road, finished the LD aboard his 20-year-old mare ("I last rode her about 7 years ago," he said), which vaulted him into the elite class of AERC's Century Club, which recognizes rider and equine teams whose ages total 100 or more. Terry just started endurance in 2011. His only regret is that he didn't discover endurance sooner! 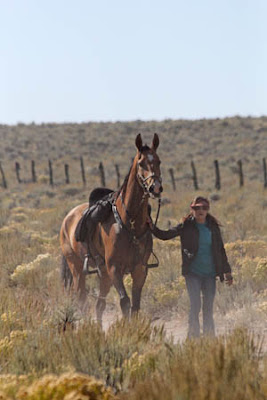 10-time Tevis Cup finisher (and 16,000+ AERC miles) Janine Esler from Granite Bay, California, brought along a gorgeous golden Akhal Teke to do the 100. "There just aren't that many 100s that I can ride my horses in," she said. Janine's not tall, and her horse must have been 17 hands. I never saw her mount all day, so I'm not sure how she got on! She finished her 20th 100 mile ride. 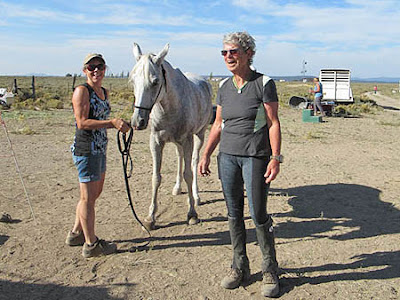 When Lois Fox crossed the finish line of the 50 aboard her 19-year-old gelding Iced Mocha, she celebrated his 5000th endurance mile. It's the second horse of Lois' that hit 5000 miles - Rustie did the same in 2015 at this very same ride. You'd think by now that Iced Mocha is laid back and easy to ride, but, not so. "He's a raging idiot!" Lois said. He used to wear her out for 50 of 100 miles, but now he only wears her out for about 25 out of 50 miles. Tani Bates had bottles of champagne waiting for Lois after the vet proclaimed Iced Mocha fit to continue at the finish! 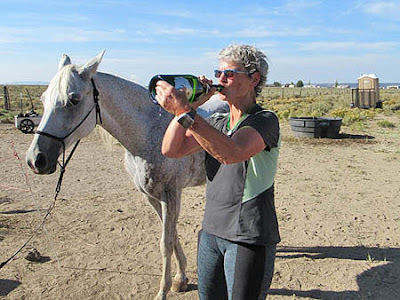 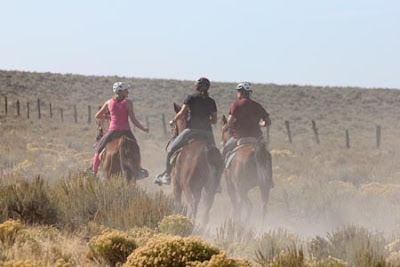 A familiar sight at the Northwest rides, the Blakeleys got a round of applause at Friday evening's ride meeting - particularly 18-year-old Sanoma, who won the Tevis Cup last month, and who all of us in the Pacific Northwest claim as our own! And not unexpectedly, the Blakeleys (mom Gabriela and dad Wasch) snagged first and second place in the 100 miler, cruising the course in 11:17 (Sanoma was pulled earlier in the day).

Canadian shipper - and 2016 Mongol Derby winner! - Heidi Telstad and her JV Jamison won the 75 miler and got Best Condition.

Another pair of blue-chip endurance riders, Melissa and Robert Ribley, hauled up from California, finishing 4th and 5th in 18:04. Melissa (second place in the Tevis Cup, and the Haggin Cup winner in 2009) finished her 57th 100-mile ride, and Robert finished his 104th 100-mile ride. These two will be hosting and ride managing the AERC National Championships October 31-November 2 in Ridgecrest, California.

Put this 100 on your calendar for next year, and come out expecting the usual great trails, vets, volunteers, awards, food, riders and horses, and good times!

My ride photos are at:
https://www.theequestrianvagabond.com/Clients-Endurance

More on the ride at:
http://www.endurance.net/international/USA/2019Oregon100/