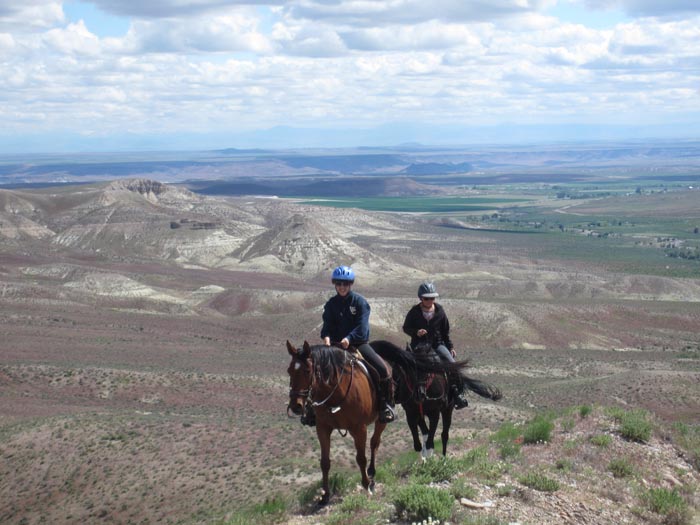 If we really like you, we'll put you on the best endurance horse ever, and we'll take you on one of our favorite trail rides.

We'll escort you when the spring wildflowers are on their best and brightest behavior, dancing in the breeze above Hart Creek Canyon: brilliant scarlet or salmon or orange Indian paintbrush, purple and white phlox bouquets, pink and white buckwheat buttons, deep purple larkspur, yellow and purple asters, orange globemallow. 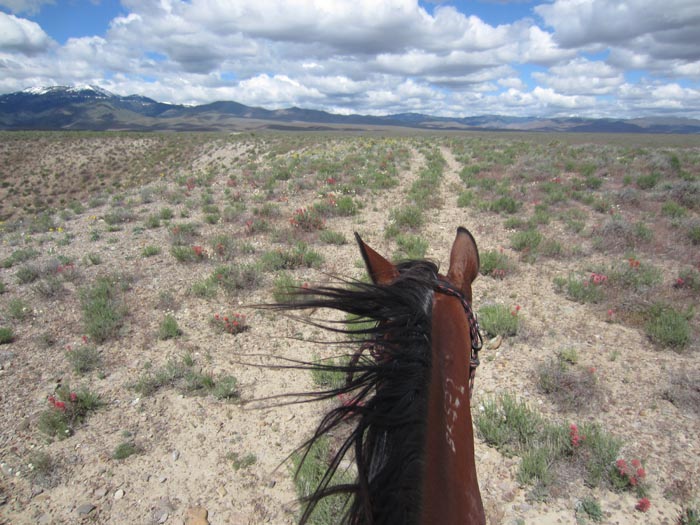 We like Marley, Carol's visiting niece, so we put her on Jose, the best endurance horse ever, and took her on our favorite picturesque trail amongst the spring wildflowers of the Owyhee desert country. 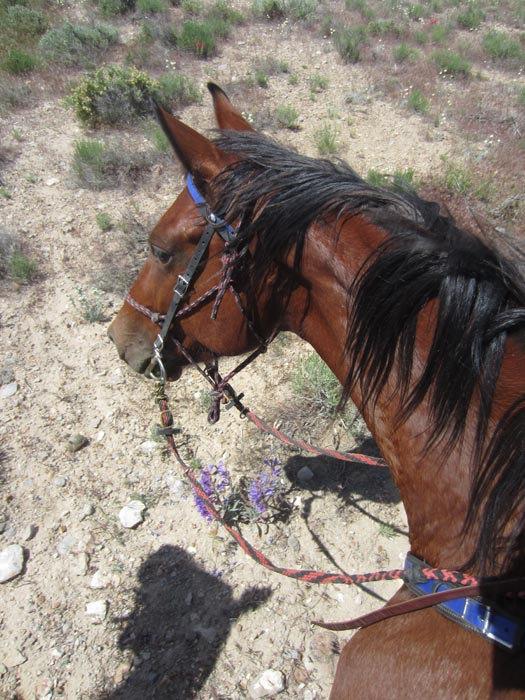 It's great to have good endurance horses who can easily cover the miles, who like moving out in the high desert country, and who seem to appreciate the outing as much as humans. Jose likes to stop on hills and admire the scenery; Willie particularly noticed and checked out the purple larkspur (he stopped to sniff them); and August and Jose posed nice for their photos in the wildflowers with the Owyhee mountain backdrop. 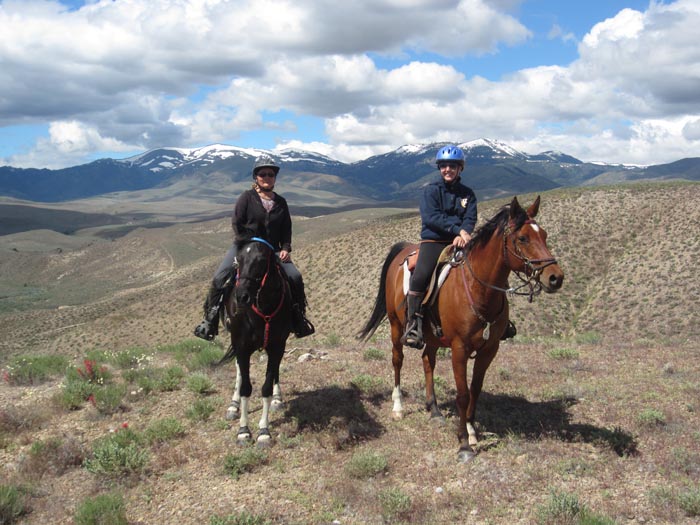 Posted by The Equestrian Vagabond at 2:07 PM 3 comments: 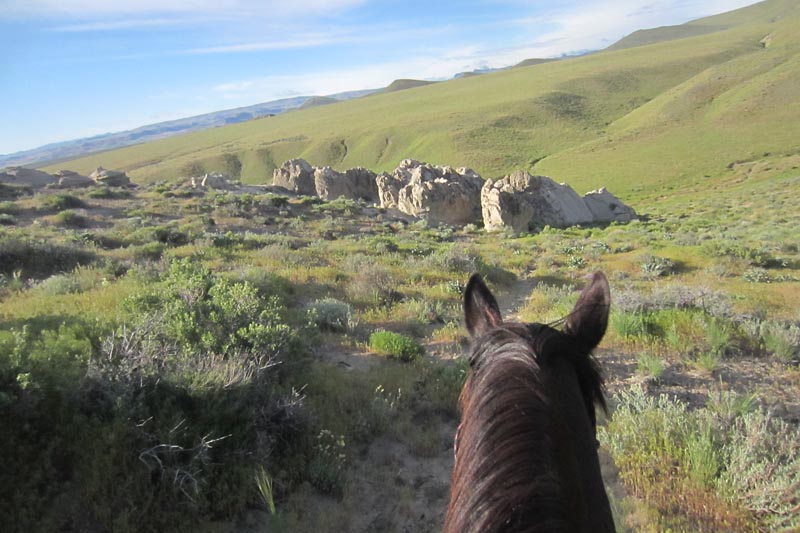 I should have known my endurance ride weekend would be a bit off kilter, when I got to Ridecamp and I realized I forgot The Raven!!!!!!! Only the second time in over 7000 miles.

Connie's horse Finneas, Grandson of the Black Stallion, and don't you forget it, was my mount for the 55-miler in this desert canyon country. Only in this ride, Finneas forgot about the "Grandson" part, instead thinking he was the O Great One in the flesh himself.

Everything worked out well at the last ride, Eagle Canyon, when Finneas and I arrived in the morning an hour before the start. While he was still Blusterufagus at that ride, he never saw his pasture mates in Ridecamp, so he didn't know he had to defeat and lord it over them all (being Grandson of the Black Stallion and all.)

The original plan at this Owyhee River Challenge *was* for me to arrive in the morning again with Regina, but plans got scrambled and changed (hence I forgot The Raven in the chaos), and we trailered with neighbor Carol and August, arriving in Ridecamp Friday afternoon. Which meant Finneas cast his Grandson-of-the-Black-Stallion Stink-eye over his herd mates tied to the trailers all Friday afternoon and night, planning his winning strategy.

Therefore when I saddled and bridled Finneas for the start of the ride, and then led him away from everybody, to let them go start and get ahead of us, and to wait for a quiet bubble to go out, Finneas realized what was going down, and it hit him right when I climbed aboard. He was absolutely furious, and he went to hogging it.

Yes, bucking. Seriously, royally pissed-off-bucking. I think he was roaring and screaming too, but not sure. He was madder'n'a hornet in a swarm of bees in a bucket. Did I mention this horse is 18 years old now?

I stayed aboard, and I sent him charging down the 2-track road toward the river canyon (the opposite way from the start, but he didn't know that) getting his mad energy into motion. Finneas was raging, "I AM THE BLACK STALLION! (forgetting the "Grandson" part) I AM FAMOUS!" spewing smoke and fire and sparks and outrageous indignation, and, by God, he was winning this race, winning it by far since everybody else was way behind him.

After a good mighty powerful quarter mile I slowed him down then turned him around…. at which point he was totally confused. Yeah, he won this race, but where was everybody else to witness His Magnificence? Where were all the lowly slowpokes dragging in his majestic wake? When I pointed him back uphill toward camp, the explosion that had been such an utterly breathtaking performance fizzled, and we slowly trotted back up the hill, to and through an empty ridecamp and out onto the trail. 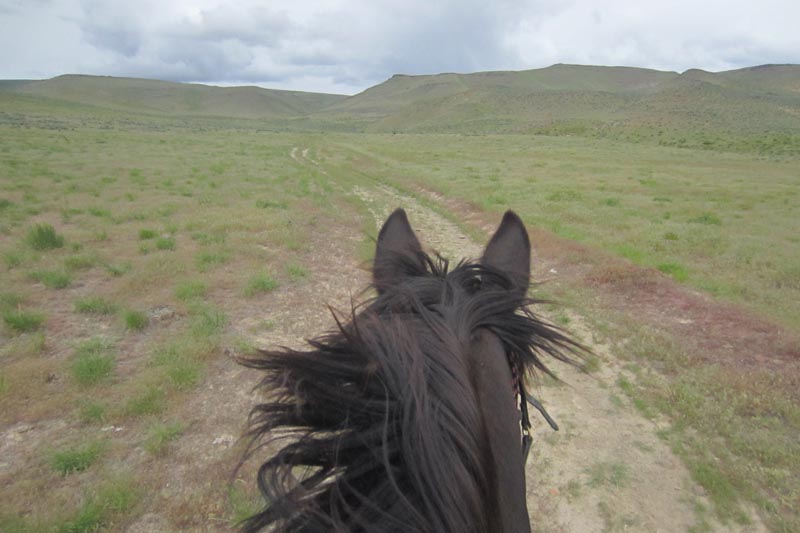 I thought I'd cleverly obtained a beautiful Bubble for ourselves; the only 2 we could see ahead of us in the distance were Karen B and Linda B. We did catch up to them after a mile or 2, and I steered Finneas in a very wide path around them, because he is so terribly obnoxious when he passes horses, climbing upward and galloping sideways and trying to get in firing range of his punk-ass rivals. Finneas haughtily passed them and trotted onward, steam-engine snorting and bulling along, when suddenly a horse-eating rock leaped out from behind a sagebrush to attack Finneas.

Zip, he leaped 10 feet to the left, zip, my saddle flipped 90* to the right, and zip, so did I. I couldn't stay on, so I fell off, looking up at His Mighteousness, Grandson of the Black Stallion, who stood there looking, I might say, somewhat embarrassed at his behavior, because really, the rock had not attacked him after all nor even moved nor even looked remotely scary. I got up, shoved the saddle back up where it belonged, snugged down the cinch (which was quite loose now, though it had been tight when I left the trailer), climbed aboard, gave Karen and Linda the thumbs up, and on we went, with Finneas a bit chagrined and better behaved.

All would have been well… except here came Errol and OMR Pristine. Normally they arrive early and ride fast up front, but that didn't happen today. They arrived this morning, started late, and caught up with me and Finneas. And because of that, and because Errol and I could not find a turn in the trail, and then Karen and Linda catching up to point us in the right direction, my nice Bubble busted, and the first loop kind of went back to hell for many more miles. Finneas isn't as awful when a horse passes him, but when he passes a horse, he is just naughty, and he can stay mad for miles. After a couple more miles of riding a snarly-gnarly blustery ball of fire, leap-frogging horses, and having to go through a gate or 2, I finally just got off Finneas and led him on foot for 10 minutes, to let everybody get way the heck in front of us. Then the final miles of the 20-mile first loop were much better now that we had our bubble back (Finneas thought he was back in front and winning again).

Back at Ridecamp for our first vet check, I remembered to both pulse down and vet in (there was no hurricane blowing to distract me, you see, like there was at Eagle), and I watched some suspicious clouds starting to build on the southern horizon. As I rode out of camp onto Loop 2 (a repeat of Loop 1), they were definitely heading my way.

"Eh, they're moving south," Robert the vet assured me, when in fact it was obviously the opposite, with Ridecamp being directly north in the path. Clearly, Robert was throwing out a bit of #fakenews, but I guess it's okay if it's done to make people feel better. I hear that's what politicians do, so the same must apply to thunderstorms, right? 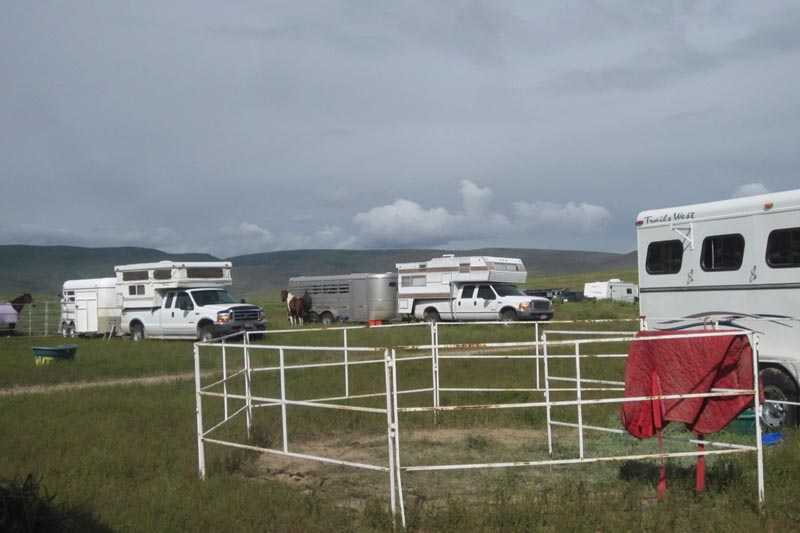 The repeat 20 miles of Loop 2 was just plain pleasant, since the trail was quite easy to follow now, Finneas was winning (with 3 riders behind him and the rest out of sight and well in front of him) and easy and pleasant to ride. I got off and walked or ran down hills, and Finneas cruised along on the flats and uphills. I was Stink-Eyeing the thunderstorms out of my path, and the wildflowers were putting on their brightest colors for the event.

And then there was Loop 3.

14-mile loop 3 started out the same direction (which Finneas was not impressed with), before turning off on a shorter version of the first loops. All went fine until about mile 8ish. We'd gone through a gate, he'd had a nice pee, he'd been grabbing grass most of the loop, and I got off to lead him over an uneven trail over grass, since we'd be walking it anyway. I stopped at his favorite grass to let him get a bite… and he pawed twice.

I pulled him along and walked to the next good grass spot… and he pawed again, 3 times.

Oh, crap. My God, he can't be colicking.

I pulled him along again, trying to pretend nothing was happening, when he then pulled me over to a nice grass spot. I let him go there, presumably to eat… and he went straight down on his front knees, wanting to roll.

My horse is colicking, and I'm 6 miles from home. I yelled at Finneas and yanked him to his feet and marched him onward down the trail, trying not to panic. I did not have a map, so did not know where I was exactly… only a long way from camp with a horse who is possibly in trouble. Karen and Shyla and Andi were behind me and I kept hoping they'd hurry up already and catch me, to go for help.

I marched Finneas along, not giving him any slack in the lead rope, not letting him hesitate at all, and hoping to God I wasn't dealing with a Zayante crisis (this terrifying story is in my book), for about 2 miles before the girls finally caught up with me. When I told them my horse was colicking, and I stepped off the trail to let them by, praise be, Finneas reached down and took a bite of grass. Best thing that could have ever happened. If he wanted to eat, the crisis may have passed. The girls went on, Karen saying she'd have Robert the vet meet me at the pond, about another 3 miles down the trail.

I led Finneas onward… and he took bites of grass the entire way. What a huge relief. It must have been a gas colic episode, which can come on very quickly and be very painful, and which can go away just as quickly. I'd had some horrible visions about what I might have to deal with, as I dragged him down the trail alone. Even when a rainstorm came over us and soaked us, it was wonderful because there was no lightning, and Finneas continued to eat his way through it.

By the time we got to the pond, we'd dried off, Robert was there looking for us, and Finneas was indeed fine. Pulse was 56, excellent gut sounds in all quadrants, looking bright-eyed (his eye had never looked glassy with pain), and still eating grass. I led him on to the pond, where he had a good drink, and I just stayed off leading him the final mile back to camp, with him eating all the way. It was a good hike. 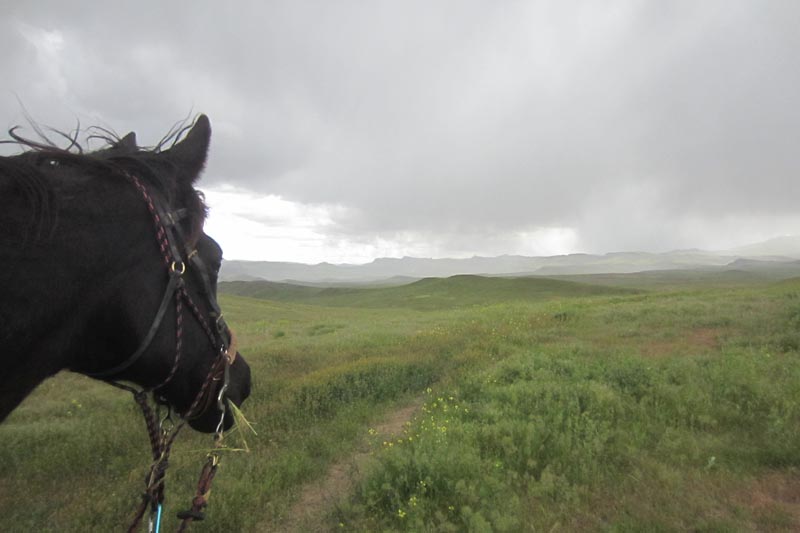 So in the end, it turned out to be a fine day over pretty trails, nobody hurt, nobody colicking, Finneas still winning (he got some applause when we arrived in camp, and greeting-ful whinnies from his herd mates) as the glorious Grandson of the Black Stallion. Quite the adventure, all without The Raven. Although I could have done without some of those adventurous episodes.

23 started and finished the 25, with Jordan Lanning and the mule Out of Idaho finishing first in 3:10, and Simone Mauhl and Dudley's friend Boogey winning Best Condition.

Posted by The Equestrian Vagabond at 6:46 AM 4 comments: