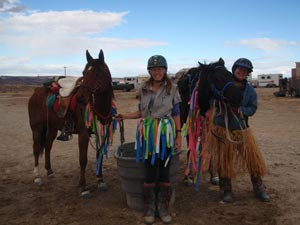 Hula Dancers (Connie and me, Finneas and Jose - who pinch-danced for Dudley, and another girl and her horse), Argentinean Gauchos (Steph and John), Sponge Bob Square Pantses, a Sheep who kept shedding wool along the trail, a Blue Tiger, a Man in a Black Cape, a Peacock, a couple of Ballerinas in Tutus, a Real Wild West Cowboy and Cowgirl... 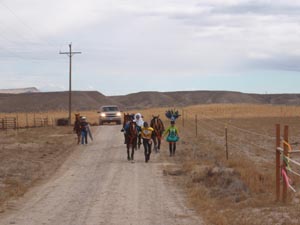 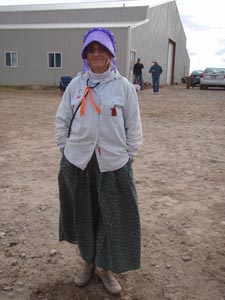 We of the Pickett Creek Brigade were late getting started on the trail again - almost 30 minutes late today. "Are you guys going or not!?" roared Regina the ride manager. We scuttled out onto the trail, hula skirts and Argentinean dreadlocks flapping in the wind.

The Gauchos and Hula Dancers split up, so our horses would be more settled today. Jose was so light in his bridle this morning (though we went along at a faster clip more to his suiting), that after loop 1, much to his delight, he went in a sidepull the rest of the day. "HULA HULA!" I screamed, whenever we spotted anybody on horseback. We frightened a few horses, who had apparently never seen Hula Dancing Horses and riders before. (Go figure!) Naomi Preston's Karlady pinned her ears at such foolishness when she met us later in the day. 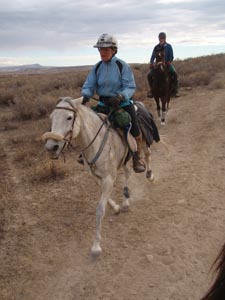 Blue storm clouds and silver virgae dramatized the morning skies and snow showers flirted with the Owyhee mountains, but we dodged the rain all day. We followed a new trail along an impressive rim overlooking some more fantastic Owyhee Badlands, 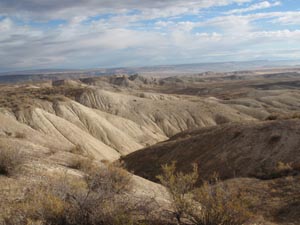 with Castle Butte looming purple in the east and the gray buttes along the Snake River floating to the north. Jose was impressed with the scenery, stopping on the hills to look around at the views. Back at camp for the first vet check, Connie discovered her dog Ben Jovi had locked himself in her car, when she told him to sit, and he sat on the car keys and locked the doors. Jovi could not be made to sit on the keys again to unlock the doors, so Connie and several people tried to unlock the doors through a back cracked window with a lunge whip. In the end, the Ben Jovi was freed, and it was just about time to go back out on the trail.

18-mile loop two, the same old loop that takes us by the Snake River was the same old impressive. Always a different hue, today the Snake was a light silver-blue, reflecting the skies. We caught up with the Man in the Black Cape, the Blue Tiger, and Lynn and Agnes (dressed as Lynn and Agnes) at the prettiest part of the trail. The last 12-mile loop 3 took us across the highway into the backside of Oreana. Jose, as always, with his eagle eyes caught all movements in the distance and stopped to stare - trucks, cows, a tiny distant rider on horseback, and the Bates Creek drainage. 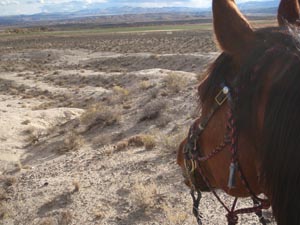 We hula'd back to camp as the sun threw our long shadows across the golden fields above basecamp. I hugged my pal Jose, thanking him for another terrific dance.