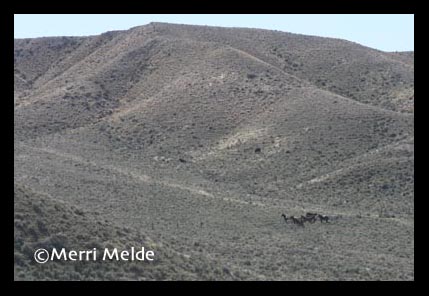 Terrifying Creatures wander Owyhee at will, taking what they wish. No laws can control them, no fence can contain them.

And so it was that our horse herd was terrified by dangerous cows today. (Not that our horses don't see cows nearly every day of every winter, on one side of the canyon or the other.)

I'd driven the ATV up the canyon to fetch the herd. As often happens, the horses had drifted far up the canyon overnight. They usually come back in the morning on their own - but I discovered an invisible line drawn in the sand that they were afraid to cross: the Terrifying Cow barrier. Two cows and a calf (just a baby!) were in our canyon on our side of fence, between the horse herd and home, and no way were the horses crossing that line. They were trapped.

Where the sight of me on an ATV holding a bucket of grain and calling for them usually entices them to come, this time they had eyes only for the Terrifying Cows, who had started moving away from me and further up-canyon - toward the horse herd.

Like flocking birds (check out these spectacular links here and here!), the herd flitted this way and fluttered that way, one horse Perry (the mare who is oddly attracted to other animals) moving toward the Creatures out of curiosity, pulling the herd along, then Smokey dashing away in fright, pulling the herd that way, Perry circling and approaching the cows again, pulling the herd with her, Rhett spinning around and bolting in terror, swaying the herd his way - a ballet dance, back and forth, swirl, up and back, whirl, forward and back, twirl.

(Rhett's dislike of cows has been clearly documented.)

The three cows' (two cows and one calf!) inevitable path along the fence, to join up with mooing cows on the other side of the fence, drove the mighty, 11-strong horse herd to the far corner of the canyon, into a tight whirring ball of nerves. Should they bolt and run from the treacherous cows? Should they dare slip past them, towards freedom and home? Should they totally run away from the vicious cows, toward me across the river and toward safety? (Of course they didn't choose this option.)

The cows continued their march along the fence on past the tightly woven horse herd that they completely ignored, past a wired-shut gate where they can normally squeeze through. Former Rushcreek Ranch Cowhorse Mac split off from the herd (he's also sometimes afraid of cows - see Rhett's story link above) and bravely chased the baby cow, showing him who was really the boss, before dashing back to join the safety of the rolling Horse Ball. The horses swirled tightly around to face the danger of the retreating cow butts. The cows came to a wash, where they turned and went straight through the fence to join the other cows on the hill. (Imagined )Peril to the horses was over, but the fact that the cows had just apparated (check your Harry Potter dictionary) through a fence unharmed really agitated the horse herd. They whirled and ran, spun and froze, twirled and dashed back, froze, bolted again, danced like a flock of starlings in the sky.

I never did get to ride today. 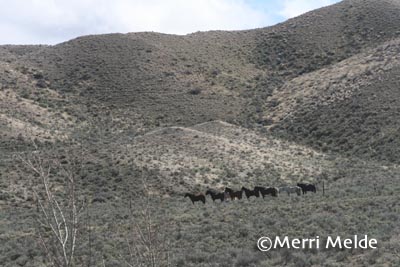 Posted by The Equestrian Vagabond at 4:56 PM