Drinkers of the Wind Arabians: The Quest for the Perfect Horse 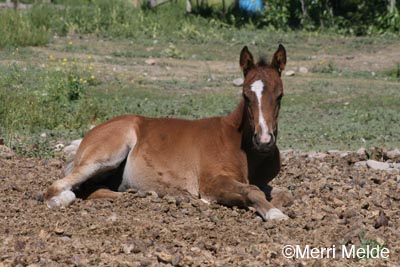 if you somehow miss that ardent sparkle in his eye, you definitely won't miss the fervor in his voice, when Robert Bouttier (known to all his friends as "Archie") expounds on his Drinkers of the Wind Arabian horses on his ranch in Bellevue, Idaho. He's always got a story to tell, and it always involves his horses. 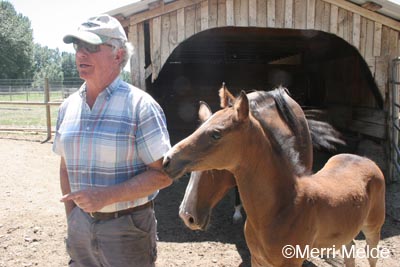 "Breeding Arabians is my passion," Archie says, as he launches into the detailed bloodlines of a particularly impressive month-old colt born to a home-bred mare DWA Croix Blanche and by the legendary racing and breeding stallion Monarch AH.

Call it passionate or obsessed, Archie is aiming for breeding the perfect horse. After decades of hard work, he's approaching perfection with the bloodlines he's ultimately focused on. The horses he breeds for racing and endurance carry some of the most outstanding Polish Arabian blood one can find in the US. 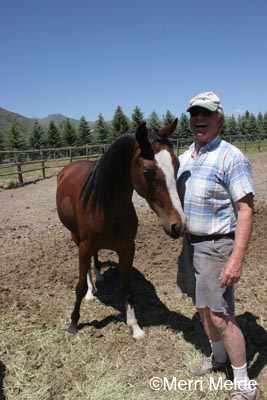 It was in the mid-1970's, when Archie, a commercial pilot, was furloughed from United Airlines, and moved to Idaho to ski and work in a ski shop in Sun Valley. And it was there he met an endurance rider who later introduced Archie to Wendell Robie, the founder of the Tevis Cup. "Listening to his friend talk about the endurance rides made Archie want to try the sport," says Helen, "and another friend who worked at the ski shop got him Tezan, Archie's first endurance horse."

That was in 1975. "I didn't even know how to ride," says Archie, "I bought a Steuben saddle, and I started going to CTRs (Competitive Trail Rides). Tezan was the greatest horse that ever lived. He took care of himself, and he took care of me. I couldn't override him because he wouldn't let me. "On our first CTR, we got second place and Best Condition. The lady judging said there was no way Tezan could get BC because, she said, 'the guy can't ride!' Tezan ended up getting BC anyway, and after that, I ended up trying endurance riding because there were a lot less rules."

Archie and Tezan finished Top Ten in a couple of endurance rides in the West. "I didn't know what I was doing. That horse Tezan, he just took care of me." Archie's second endurance horse was Mateus, whom he got as a 3-year-old, and kept till he died at 35 in 2009, and whom he considered his best friend. Archie then discovered Ride & Ties, which he was quite successful at for 4-5 years until his running partner retired. Archie also dabbled in polo, which was popular in the Wood River valley for a time. "Then I got married and sort of didn't do anything with horses anymore." Luckily for the Arabian breed, the horse fever started burning in Archie again in the mid-1980's, and he got interested in Arabian racing. Archie knew about the Wrigley family, who owned a big Arabian ranch on Santa Catalina Island off the California coast, so he contacted their trainer Joe Dawkins and asked where he could find some racehorses. Dawkins recommended Sabson as a stallion for breeding.

"I asked him who Sabson was, and he said, 'You'd better do your homework!'"

Sabson's race record was somewhat mediocre, showing 2 wins in 5 starts at 3 and 4. "Back in the old days, they started racing 3-year-olds at 1 1/8 miles, 1 1/4 miles," Archie says. "They didn't have 5 furlong races. Then after Sabson's racing career, they made him a Park Horse. He was Reserve Champion Park Horse in Scottsdale after he raced." And while Sabson had proven his athleticism and versatility, Arabian show breeders didn't really fancy him. "It was the 'show horse thing.' Sabson didn't have a classic show horse head, so nobody was using him." Lucky for Archie. "Sabson has the bloodlines of the two most important and prolific racing Arabian mares: Sabellina and Forta." These two mares have since become the pivotal aspect of the Drinkers of the Wind breeding program.

Sabson's sire Czort "is the only horse they made a Shrine to at the Polish National Stud," Archie says. Czort raced 19 times over 4 years, winning 13 races, 8 of them stakes races. He won at all distances and carried up to 146 pounds. As a sire in Poland, he sired the most winners of stakes races than any other sire. Some of his offspring (including Sabson) went on to win championships, in racing, performance, and the show ring. 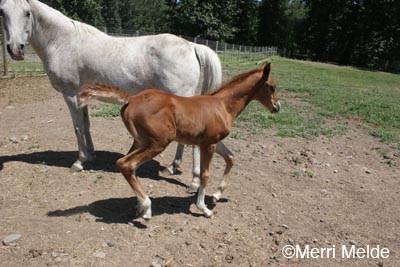 Czort is out of Forta, "among the greatest Polish Arabians of all time." While her race record was unremarkable (2 wins from 11 starts over 2 seasons), her successful production record has been unequaled. Forta produced 20 foals by 11 different stallions, 18 of which started at the track and were race winners, five of those winning Classic races. Additionally, some were champions in the show ring, and most of them were great producers in their own right.

On Sabson's dam side, Sabellina reigns supreme. She was a "perhaps the finest race mare ever to leave Poland," (7 starts in two years, 5 wins including the Derby and the Oaks), and she also became a superior broodmare. Her 16 foals won championships on the track and in the show ring. Twelve of them won stakes races in Poland. Most of them also went on to produce great offspring on the track, in performance, and in the show ring. In 1986 Archie bought the then-16-year-old stallion Sabson from Gilbert Van Camp Jr. At the same time, Archie won his first Arabian race as an owner in 1986. He became one of the founding members of the Arabian Jockey Club in the U.S. He began breeding his mares to Sabson when they were finished racing; then, enamored with - or obsessed by - the Forta and Sabellina lines, he started acquiring broodmares with that breeding, and mating them with Sabson. "For some people, it doesn't make a difference. But to get that close to Sabellina? I mean, like a granddaughter of Sabellina? And you're breeding her to a stallion that's got Sabellina in him? or Forta?" His eyes still sparkle with astonishment at the thought. The validity of this mating nick at Drinkers of the Wind Arabians (named after the book of the same name written in 1942 by Carl Raswan) has not only produced some successful racehorses but some outstanding endurance horses.

Nobody would know this better than Christoph Schork of Global Endurance Training Center in Utah, who in September of 2010, was acknowledged as world record holder of the most first place finishes at endurance events.

Schork has ridden seven DWA horses since 2000, to 69 first place finishes. The first of these was DWA Sabku +//, foaled in 1993. DWA Sabku started on the racetrack, but he didn't take to it. Endurance was where he belonged. Making his first endurance start as a 6-year-old, he competed over 12 seasons, finishing 69 of 74 rides, 17 of those first place finishes, 61 of them Top Ten. He completed 10 of 11 100-mile rides, and he might have won the Tevis in 2004, if his rider Ali Khalfan from the UAE hadn't fallen off and broken his arm during the ride, and, still riding with a broken arm, if he hadn't gotten off the trail and lost for several miles. They still finished fifth. DWA Sabku +// raced an incredible 1335 miles in 2002 alone, finishing all 23 of his starts that year. He is just 40 miles short of 4000 career miles. 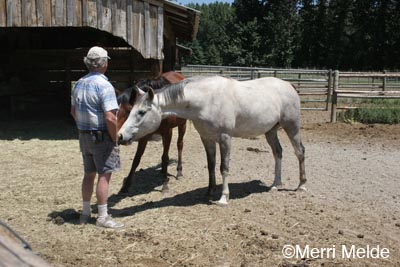 Speed, soundness, toughness, and longevity - they don't come much more solid than that. 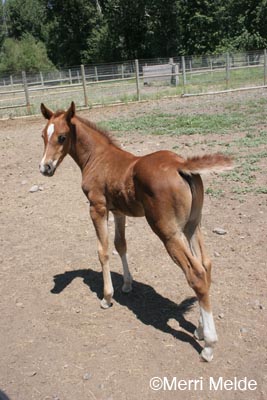 Sabson died in 1999 at Drinkers of the Wind ranch at 29 years of age. "He was always a gentleman," Archie says. Archie now uses two stallions on his ranch, DWA Ziffalat (a sound, 4-season racehorse who traces back to Forta on his topside, and Forta and Sabellina on the damside) and Moment of Valor (a sound, 4-season racehorse; a son of Wiking, with Sabellina and double Forta on his damside). He's got frozen semen from several stallions, including Monarch AH ("the Secretariat of Arabian racing", with 19 wins - 13 of them stakes races - in 23 starts, and who traces back to Sabellina and Forta on his topside), and Samsheik (a 5-season racehorse tracing back to Forta and Sabellina through his sire Sambor - a full brother to Sabson).

Despite retiring from piloting airliners in 2003, and notwithstanding the number of Arabians of all ages that Archie owns on his ranch (56 or 57 when we counted, depending on the definition of "own"), Archie isn't much interested in riding. He did 3 Limited Distance rides in 2003 and 2004, but now any spare time is spent taking care of his ranch and horses, growing and cutting and stockpiling his own hay (and cutting hay for farmers in the area) - and following his passion for breeding, looking for that perfect horse. If the likes of DWA Sabku +//, and the new babies on the ground are any indication, one would tend to think Archie's getting pretty darn close to the perfect horse.

To contact Archie and find out more about his available horses, see www.dwarabians.com Posted by The Equestrian Vagabond at 10:20 PM

Yeah, at the end of this article, I'm also personally conflicted about whether this is passion or obsession. But what I do know is that he has some beautiful, beautiful Arabians. And in the pictures, they appear to mild and well-behaved. He really might be breeding the world's best horses