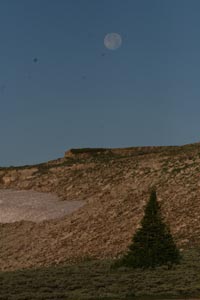 The full moon hangs over the soaring walls and cliffs of the Big Horn mountains, as we drive to the first vet check at 5 AM. Up and up and up, driving around and around in hairpin curves, we climb to Granite Pass at 9000'. The morning sun is just starting to crest the horizon when we turn off the highway and climb up and up some more. When we get to a snow field, the lead crew truck pulls a "Road Closed" sign out of the way, and we try driving further on, toward where last year's vet check was; finally the lead truck turns around and decides we should have the vet check below the snowfield, so nobody gets stuck or slides off the road. Good plan I say! The vets didn't object to the location when they arrived. Steph unloads the truck with Kevin, Kevin and Rusty's crew gear and prepares food for the horses while I get out my camp stove, and put it together and start to boil water for the fresh Starbucks grounds I'm going to put in the French Press, so the boys can have some freshly brewed coffee like I promised them (after, of course, Steph and I have a serving first.) 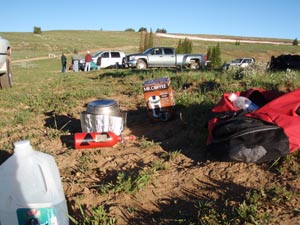 As the water is starting to warm up, I realize I forgot the coffee grounds. I am crushed. I start having flashbacks to my Tevis crewing fiasco. ("Where's my Starbucks!? You didn't bring the Starbucks?!") Sadly, I dismantle the stove and pack it and the French press away. 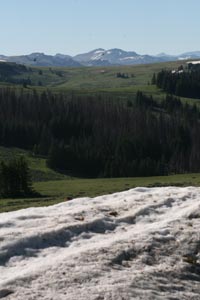 I climb up the steep hill to where I have a view of the trail where the riders will be coming from; indeed a panoramic view of the Big Horns. It's pretty stunning, pretty fantastic to be waiting for our riding friends who are crossing this immense country on horseback.

The biggest part of crewing is: waiting. You wait, and wait, and wonder, and sometimes worry. I tried calculating when they would arrive... supposedly this first section was 28 miles, so, at 6 mph, climbing most of the way, it should take around 5 hours, so somebody should be appearing around 9 AM. 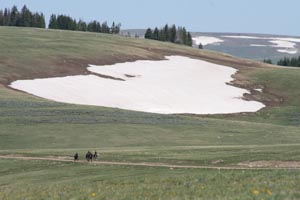 And sure enough in the distance, little moving dots became apparent. Across a broad high valley flanked by snowfields, the first 4 riders came my way.

Andy Bown is off jogging while tailing his horse. 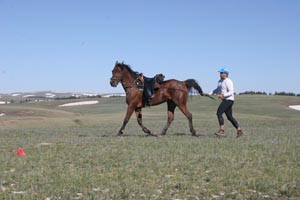 The first riders drop down off the ridge into the vet check. 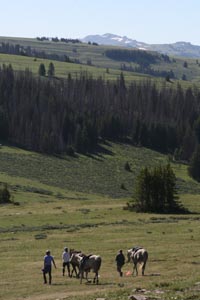 Our boys are all smiles when they come in not long after the leaders, and the horses look good so far. Since I've forgotten the coffee grounds and can't provide coffee, my next most important job is remembering to remind the boys to plug in their GPS's during the vet check. A fully charged battery will only last around 11-12 hours, so it's vital to do this during the two 1-hour holds. As it is, the batteries might still run out near the end of the ride - in the dark - when you least want them to! GPS's have been absolutely essential in the last couple of years of this ride, in getting lost riders down off the mountain after getting lost in the dark, or having no marked trail to follow. 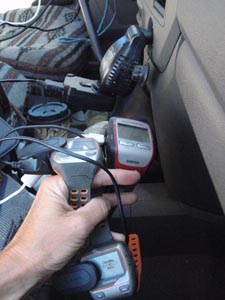 The boys rest while the horses chow down. They eat the whole hour. 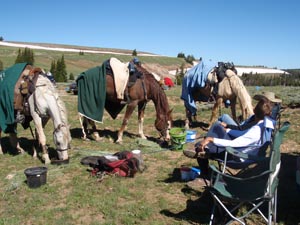 In fact the boys, and us girls, eat well too, because Tim French has taken it upon himself to cook eggs and bacon for everybody at the vet check, along with coffee, made from fresh grounds!, out of the back of his truck! What a big unexpected treat that was! It tasted extra delicious being out in the boonies. 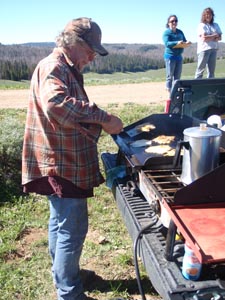 Everybody leaves out of this vet check; it's only (we are told) about 11 miles (!) to the next one. Laura's horse looks off, and Bill's might have something going on, but the vets let them go on since it's only about 11 miles to the next vet stop, where there's easy access for trailers. Kevin and Rusty and Kevin head out, all looking good so far! 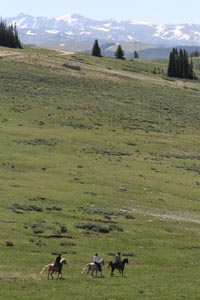 "You can't miss vet check 2," we're told, "it's right off the highway. You passed it coming in this morning." I didn't notice it because I was too sleepy (probably not the best state for crew to be in), but Steph saw it, and we easily get to the next vet check in short order. It's at Antelope Butte ski area, a small affair but with cabins tucked in the woods, and a green meadow busting out in spring flowers at the moment. This is where last year's rainstorm began that wreaked havoc for so many people in the ride, but this year the weather is perfectly clear, and still pleasantly cool up here at altitude.

We set up the horse and rider gear and food - Steph cuts the carrots up in little bites for our horses. Bev Gray on Jolly Sickle, and Kerry Greear on Joe have taken over the lead coming into this stop. This is Jolly Sickle's second season and his second hundred. It's Bev's 50th (!) 100-mile ride. It's her 5th Big Horn - she finished 4 times, winning and getting BC on Paladin in 2001. It's Kerry's 3rd Big Horn 100 ride. 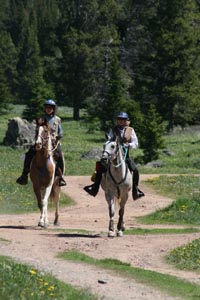 Our boys were a little late coming in to this check, having been passed by a handful of people. Oh no, we thought, did they get lost? Sure enough, after arriving, they said they'd lost the ribbons for a while. "Same place as last year!" Rusty said. But they knew where they were supposed to be going, and they had their charged GPS's on, so they were able to find the trail again, and continue on.

The horses ate their fill, switching between grain, hay, grass, alfalfa, and carrots. Far's favorites were the dandelions. He rested more than the others, and he might have looked tired, but he was probably just conserving his strength because he knew how far he had to go yet (he finished last year with Kevin, as did Rusty and Rocky; it was Kevin W's and DE Golden Ali's first Big Horn 100). Besides, his CRI was 56-52, so he was doing well. Bev and Jolly Sickle led the way out of Vet check 2, headed to Vet check 3, somewhere in the mountains at Battle creek. We'd heard the mileage was "21" to vet check 3... but Steph had been told the same thing in 2006, and it had taken her 7 hours - no way it was only 21 miles. We expected the same inconsistency this year. This was also the part of the trail where 'some trail had been taken away, some had been added'... but nobody really knew how, where, or how far, since it had not been communicated to riders and crews by ride management at last night's meeting. We were prepared... but other riders were not. This big discrepancy would later affect some of the riders on the 100. Next up: The Final Stretch

Many more photos at:
http://www.endurance.net/international/USA/2011BigHorn/
Posted by The Equestrian Vagabond at 4:05 PM

Darn! How long do we have to wait till Part 3 - the final! Wonderful reading Merri, as usual!