"You should have seen him! He trotted out like God's Horse!" Richard said, of Dougal's pre-ride vet in at Le Grand Luce. Dougal powered up and down the trotting lane, neck arched, looking all around, floating on air. Like he usually does. At one ride he actually got applause from the onlookers.

I'd gotten a somewhat mysterious text from Nicky just before I arrived at the venue, "Are you at the ride yet and is Dougal ok!"

Apparently, when Richard rode out on Mr Ox to start his 40 km ride, God's Horse, in a 3-strand tape pen back at the trailer (waiting to start his 20 km ride with me a couple of hours later), took off straight through the tape and ran through ridecamp, then strutted back to the trailer where he was caught. Apparently he was announcing to all present, "I am God's Horse and I am back!"

Dougal's 12 now. He had been in one of Shaikh Mohammed's Arabian racing stables, destined to be a racehorse... but he was possibly tried on the track at 3 and found to not be fast enough (he's built unlike a sleek Arabian racehorse - he's more bulky), and he was turned out in a field for 3 years. Team Nellie - Nicky Freud and Richard Allen - bought him as a 6-year-old, and re-broke him.

Dougal turned out to be fast enough on the endurance tracks - since he started endurance at 7, he'd won 3 rides, finished second 3 times, was third once, and fourth once. He'd gotten a bit of a reputation because of his good record; and Dougal simply knew he was King of All Horses. It's not a conceit he exudes, but a supreme confidence.

So I felt a somewhat large responsibility to ride this majestic horse correctly in our 20 km ride today.(Dougal didn't have to go only 20 kilometers at set speed, but I did, since I'd never done an official endurance ride in France, and I am not a USEF member nor FEI rider.) And luckily, we'd be riding our first (and only) 20 km loop with Richard and Mr Ox on their second 20 km loop (of 40 km total).

In the set speed rides, you have a 'start time' - meaning you can start at (for example) 10 AM... or an hour or two later. Finish placements are determined by your horse's final heartrate and your finish time (within the alloted 12-15 km/h - you will be eliminated for finishing too fast, even if your horse might have an ending heartrate of 28 bpm).

I can gauge a pace fairly well in my head, from 6 mph to 12 mph, but it would be good to have Richard to ride with, since he knew Dougal well and how fit he was. It really took all pressure off me and allowed me to, simply, have a fantastic ride on the King of All Horses! 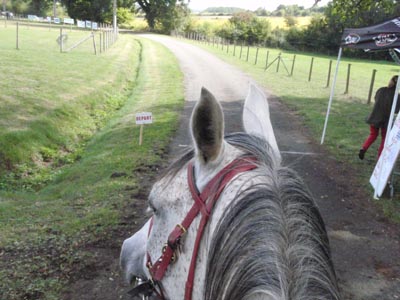 We headed for the "Depart," where Dougal followed Mr Ox out onto the trail - and then he quickly took over the lead, and headed happily down the trail, ears pricked forward, bounding along in the lightest, softest, most comfortable canter a horse could ever do. It was impossible to get lost, as temporary signposts marked the 20-km blue loop every kilometer, though Dougal seemed to know just where he was going anyway. 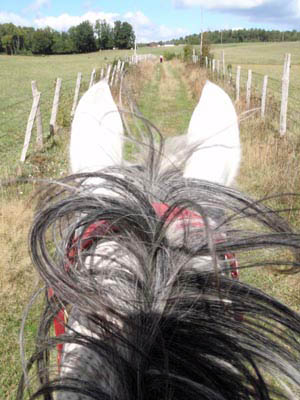 We followed good bridle trails past farms and through forests, paved roads through villages 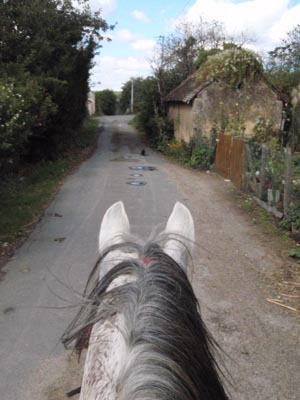 and onto old country lanes. 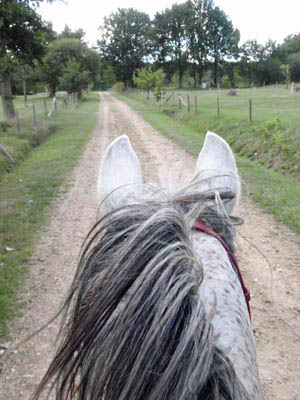 Volunteers directed us across roads or through villages, and at one spot they took our numbers (which Richard had to call out for me, because I can only count to ten in French!)

I could feel Dougal beneath me, truly loving the ride as much as I was - and Richard thoroughly enjoyed watching him - his ears, his eyes, his expression; his front feet shooting out in front of him like pistons, attacking the trail, but moving lightly, and not tugging on the reins. That all changed when some stallion had the audacity to catch up with us and pass us. Some nerve! Dougal was insulted. I had my hands full for a while, convincing Dougal we weren't going to race after him and pass him back up. After a while and a couple of corners through a village we could no longer see the stallion, but Dougal knew he was still up there and he remained incensed for a while.

We came to a couple of crewing stops where - as is the norm here in Europe, our crew (Nicky, Selina, Graham and Elsa) met us on the road, 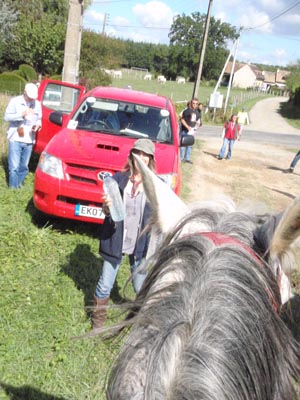 where they handed us bottles of water to dump on our horses to cool them down. The day wasn't hot, but Mr Ox was not the fittest he could be, and Dougal was slightly on the pudgy (but still ever so majestic) side, so the water was refreshing for them. However, Dougal thought one bottle of water was quite enough, and the subsequent bottles were wasting time where he could have been assaulting the trail.

Ten utterly delightful kilometers flew by, and another nine - and suddenly the "Arrivee 1 km" sign indicated we had one kilometer till the end of this lovely ride on this terrifically fun horse. 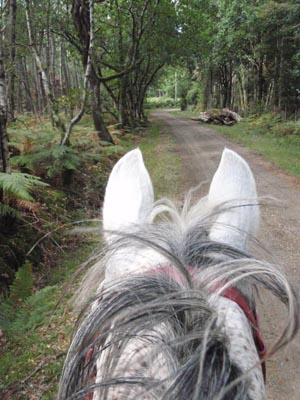 And then with just a half a kilometer left, suddenly behind us on this single track lane, someone was yelling. I speak not a dozen words of French but there was no mistaking what she meant, "'Scuse me, coming through!" She was racing for the finish of the 90 km ride. Uh oh! I managed to get Dougal off the trail, and she galloped past, without Dougal getting too aggravated.

Until 5 seconds later, when another voice came yelling from behind with the same sense of urgency.

Oh no! Dougal was not about to let a second horse race past him without a fight. I tried every which way I could to move him over, but I could not get Dougal out of the trail. I yanked on his right rein, I gouged his left side with my heel, but as I managed to wrestle his head to the right off the trail, he threw his butt into the trail to block that oncoming horse.

There was yelling (from the galloping rider). There was a commotion (did he fall off?). There was cursing (I think that was from me) and apologizing (definitely me). There was snarling (from Dougal). I don't know what happened, other than I stayed in the saddle. I don't remember getting Dougal off the trail, I don't remember if we spun around, but at some point I looked up, and the boy had gotten by, picking up a gallop again and chasing after the girl.

We heard a few moments later over the loudspeakers that he had finished second (and first place got a Gaston Mercier saddle!). I hoped he wasn't going to hunt me down and pummel me, but in fact, we saw him later, and he apologized! Dougal, on the other hand, was clearly unrepentant. This same young man had beaten Richard and Dougal in a race a couple of years ago, so clearly Dougal had carried a grudge and was exacting his revenge. We trotted on into camp, and Dougal and I (and, of course, The Raven) strolled across the finish line, completing my first French endurance ride! Of course I was ready to go out on another couple of loops, but that was it for today. And it was a good physical and mental refresher for Dougal on his return to endurance. (Nicky said later, "I don't think he lost a pound!")

As soon as we got back to the trailer to unsaddle, Dougal's pulse was already down to 43.

We all escorted Dougal and Mr Ox to the vet ring for their final vet check 30 minutes after crossing the finish line. Dougal stood there almost bored as the vet checked him over and took his pulse, but then as Richard trotted him out for the vet, the King of All Horses, "The Champ," as Richard and Nicky like to refer to him, came alive. He lifted his head high and spread his hind legs wide for a big power trot, showing off, shaking the earth like God's Horse, attacking the trot out like he'd attacked the trail today. At the awards ceremony, the ride management was kind enough to not just acknowledge my presence as a foreign rider, coming to ride in their 20 km ride (and mention my Tevis Cup finish : ), but, besides the goodie bag we all got (Tshirt, baseball cap, plaque, fold-up hoofpick, tub of little rubber bands, bag of horse treats), they presented me with a special bottle of white wine made in this very region! (Also after the final vetting, each horse got its own goodie bag of apples!) It was a fun experience, on a delightful horse who was a blast to ride. Thanks to everybody who put on Le Grand Luce, thanks Carol Arthur for getting me a French riding license, thanks Nicky and Richard - and many to thanks to God's Horse, for the great ride! 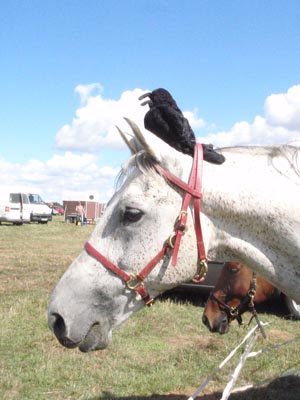 Posted by The Equestrian Vagabond at 3:07 PM

Merri, You are so very lucky! What an experience to ride in the French countryside. I so enjoy your stories and pictures.
~Annabelle