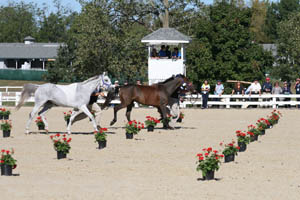 It's just impossible to cover an event of this size by yourself. Lots of time spent just walking to get somewhere (and lots of lusting after people whizzing by in golf carts - if you can grab a seat in one you're lucky). The logistics of transport, parking, walking, finding out when something is happening, taking photos, taking notes, trying to talk to people, trying to walk somewhere to say hi to someone when someone else stops you (all of whom I am happy, and in some cases, thrilled to see again), and another person whizzes by in a golf cart before you can say - "Mercedes! Wait!!" and you might not see them again... So many people I wanted to talk to and haven't even seen yet...

Hard to keep an eye on all the horses vetting in - they came by countries, somewhat in alphabetical order - and hard to know who everybody is, since the horses get numbers on their butts after they successfully vet in, and though the grooms wear numbers, I don't recognize all the grooms, and we don't get a list of those numbers anyway.

(Try slipping a lunch in there somewhere...)

In the afternoon I parked by the training course where I watched some of the horses and riders go out for their final exercise. Previous World Endurance Champions Maria Alvarez and Nobby were looking excellent. 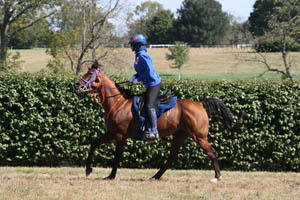 Penny Toft and Don went for an easy trot - after Peter lunged him in the arena so he could get his leaps and bucks out. 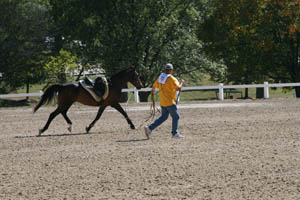 The Japanese, Belgian, French, Qatar, Great Britain, German, and Brazil teams went out together. France looks to have a very tough team this year, and the UAE's strengths goes without saying. Keep an eye on the Netherlands' lone rider Carmen Romer. She's a young but smart and experienced rider, riding American horse Tuff Enuff FA, which she rode to a second place in a 100 mile ride in Florida last year. She's also ridden Val Kanavy's King Ali Gold to a 3rd place and BC on a 50 in Florida this year - enough said.

Closing ceremonies were entertaining, with some excellent horsemanship and music including opera and New Orleans jazz. It was a long ceremony - 3 hours and sadly by the end half the stands were empty - the excellent music was probably lost on some of this crowd, and most of the riders and grooms had to get to bed!

(Many more photos, and more stories to come at
http://www.endurance.net/international/USA/2010WEC/
Posted by The Equestrian Vagabond at 9:27 PM