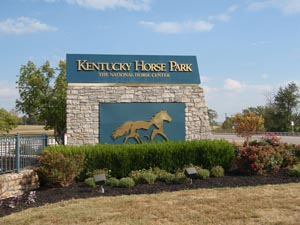 We've arrived in Lexington for the World Endurance Championship part of the World Equestrian Games. We got our basics out of the way this afternoon - stop at a camera shop; pick up our credentials (later to discover that photographers Genie and Shelley got credentials only for journalism, not photography!! - which was soon worked out); figure out the shuttle/car parking/walking thing at the Kentucky Horse Park; get our bearings on the course, media tent, vetting in area, and stables; find our hotel; eat; try to fix my broken computer (and fine timing that was.)

Computer is now fixed (knock on wood)(after a trip to Walmart for tools). It's late, and tomorrow will be an early experiment in catching the 45 minute shuttle to the Kentucky Horse Park for the vetting in, which begins at 9 AM.

The Kentucky Bluegrass is more Brown Grass - it must be very dry here - but a 'cold front' is moving through, dropping a little rain tonight, and dropping the temperatures from 95* to 75*. I optimistically did not bring good rain gear, so I expect it won't rain for the Endurance Race on Sunday. Forecast is for clear skies and 76*.

We've heard rumors that Jean Louis LeClerc, the French chef d'equipe was fired on Monday but nobody knows why. We heard a Dutch horse colicked and died, but it wasn't an endurance horse. Belgian rider Karin Boulanger's endurance horse Poespass did colick in quarantine in Cincinnati and was operated on there - no word on how he is doing. We just heard Ellen Rapp's horse Smokey Berjo came up lame so she is out of the WEC - alternate Deborah Reich and DJB Juniper will be on the US Team. Tough luck for Ellen! (But good luck Deborah!)

Endurance horses have moved from other training grounds (like the US moved from Shaker Village) into the Kentucky Horse Park today.

You can follow tweets from Endurance.net and others at
http://www.endurance.net/international/USA/2010WEC/

Otherwise, I'll be posting endurance stories and pictures as I can get to them - probably in the evenings!
Posted by The Equestrian Vagabond at 7:19 PM

Merri
I love your photos!
And I am jealous that I am here in Utah and not engulfed in the full spectical. Is Hans Buckel on the Chilean team. Just give him a big hug. And if you could do that to Sheik Mohammed, say its from me!!!!!!!!