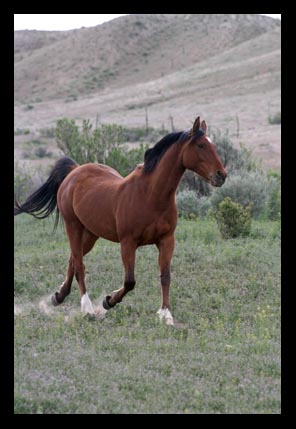 Crysta at Go Diego Go just did an entry, "Ride Preparation Checklist," for her endurance ride coming up this weekend.

We have another local ride here on Saturday (the Owyhee Spring 30/60/75), just down the road.

I'm packing the same amount of gear that I would take for a 5-day ride halfway across the country (minus the sleeping stuff). Is this rational?

It's all about the weather, not any neuroses I may or may not have. (I think.)

Rain, cold, wind. And the weather's always changing here. But even when it's cold, I can get awfully hot, and I hate to be hot. Riding is a workout, and I tend to like to start out cool because I'll always warm up. But deciding on what to wear is a rather scientific thing, and can't really be done until right before I get on the horse in the morning.

I'll be taking: several pairs of tights (2 fleece, one non-fleece), 2 pairs of gloves (1 thick for warmth, 1 not so thick), several long underwear long-sleeved Tshirts of various weights, 1 short-sleeved Tshirt, 2 sweatshirts, a flannel long-sleeved shirt, 2 vests (a light one and a heavy one), at least 3 jackets of various warmth/wind-breaking ability (can be layered if it's deadly cold), a raincoat, several bandanas, 2 pairs of riding shoes, 2 pairs of chaps (which I wear will depend on the temperature and precipitation). Maybe I should throw in my full-length chaps too, just in case it gets down to polar temperatures...

And, by the way, none of this stuff matches. So it's not about the color scheme or looking sharp!

Chapstick, eyedrops, sunscreen, sunglasses, bug net (for me and Jose), snacks for the trail and lunch, extra water, (preferably frozen the night before, so I have cold drinks - yes, even if it's freezing outside), gatorade, bottled Starbucks.

And of course my reins and and helmet and camera and the Raven.

Did I mention the ride was just down the road? Literally. So close we are driving there in the morning to vet in and ride. I'm still taking the same amount of gear in my duffel bag.

Good thing all Jose needs to bring is his wonderful personality!
Posted by The Equestrian Vagabond at 5:58 PM