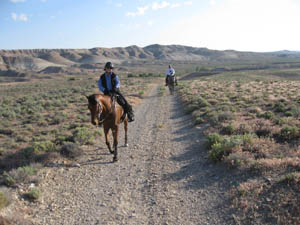 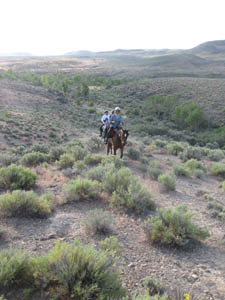 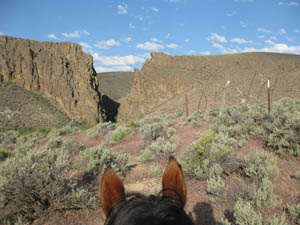 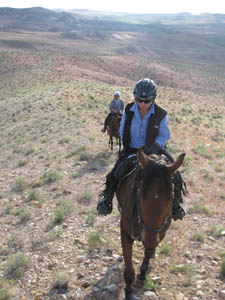 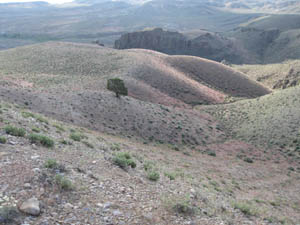 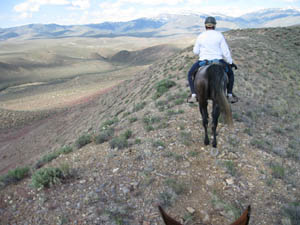 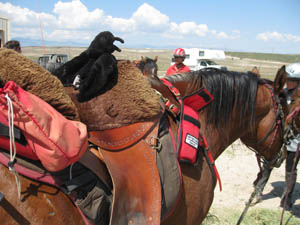 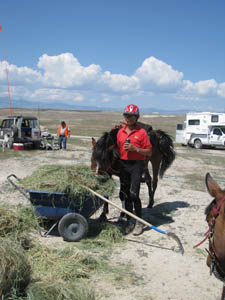 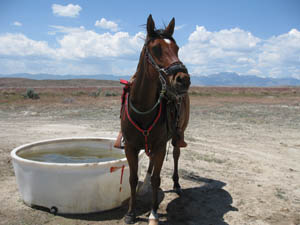 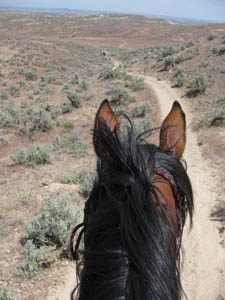 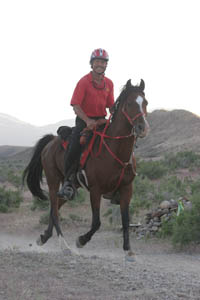 About half the riders that were signed up for the 55 didn't start today. One rider suggested that probably had to do with the fact that several were FEI riders who were burned out and worn out after two days of riding and trying to qualify horses, topped off by yesterday's 100 and the hours of standing around afterwards waiting for their horses to be tested.

As it was, the rest of us went out just to have fun in the desert. Only 2 riders started the 75-miler at 6 AM, 16 started the 55 at 7 AM, and 8 started the 25 at 8 AM. One on the 50 was Tom Noll... not on Frank, and not on Whiskey, but on Karen B's extra horse Blue Lightning. Another guy was going to ride her gelding with Karen on Thunder, but right away, he got bucked off at the start and said forget it. Karen left on the 50 with Lightning tied to her trailer and her friend Linda Ballard about to unsaddle him. However, Linda spied Tom Noll and asked him if he wanted to ride the horse. "Sure!" he said, never having even seen the horse before, and he hopped on Blue Lightning, and away they went down the trail on Blue's first endurance ride (with not a bit of bucking.) Karen saw them later : ) and was happy Tom was riding him.

It was another great day on the trails for Jose, me, and the Raven. The first 15 mile loop is one of two trails we take visitors on that we really like: the Hart Creek Homestead loop, south into the Hart Creek drainage, following the creek, then climbing back up onto the flats on a steep and sharp ridge past the narrows and overlooking the upper canyon. Gretchen and Mickey and I hooked up with Tinker Hart on her gray mare RTR Quiet Riot, on a morning that was just about perfect in temperature.

Crossing through the old Homestead at the creek we had a big surprise - a camper! Never in my years of riding here have I ever seen anyone camping down there. It's a sweet spot, but not many people know about it. By the time we came through, he seemed rather resigned to the fact that his quiet morning had a lot of drop-in-pass-through visitors. "How many more behind you?" he asked. I said "Oh, about a dozen or so." I didn't think it appropriate to yell, "Where the bacon???"

After our 40-minute hold back at camp, we had new trail to blaze: a 25 mile out-and-back loop west to Regina's place. We crossed the highway into the Snake River Birds of Prey National Conservation Area, trotted over little hills, around little bluffs, through washes, Jose nimbly zipping along eagerly with his ears pricked, curious to see what was around every next corner.

I almost had some serious trauma on this loop: we were trotting along the twisting trail through the sagebrush when Gretchen behind me yelled, "Oh NO! Merri, your Raven fell out!" We all four screeched to a halt, I turned Jose around, and there was the Raven, laying upside down in a sagebrush, enjoying life. I hopped off and grabbed him, stuffed him way down in his bag and cinched it down tight. The Raven bag was also carrying horse treats, and I'd just reached in to give one to Jose and hadn't tightened it back up! Good thing Gretchen spotted the Raven's dive, or Jose and I would have had to backtrack miles or dozens of miles along our trail till I found him! What do you think our pull code would have been if I'd gone overtime looking for him - RO - LR (Rider Option - Lost Raven)?

The miles flew by, with the different scenery, and just as we got to Regina's, we caught up with Christoph Schork, who was the only rider left on the 75. Tracy Kaden had been pulled after the 1st loop.

We had an official 'Snack Break' at Regina's. Steph was going to have us all stay 20 minutes on our honor, but 2 of the radio people went out there, to take numbers and hold us. Regina had set out two wheelbarrows, with hay and alfalfa, and she'd hauled crew bags out there. She said we could all go in and help ourselves to the beer and snacks in her fridge, but I don't think anybody did.

Our horses crowded around the wheelbarrows helping themselves, spilling hay all over, knocking over the pitchfork, and trying to avoid Regina's fat goat who was trying to horn his way in close to anywhere a horse was eating grain. All except for Jose, who was very curious and wanted to investigate.

We took the same trail back, but in this direction it was completely different scenery. It was warm in the washes, pleasant breeze up on the flats. Jose and I moved on ahead a while by ourselves until we got to the water troughs near the highway crossing. He drank, I got off and dunked my bandana in the water, and Jose watched, transfixed, as the other 3 horses come down off the flats and up to us at the water trough. Jose loves to watch things. Seven more miles to go, and we arrived back at basecamp for our second 40-minute hold.

Spice was out on lameness here, and Dublin waited a bit to go out, so Mickey and I went out together on the last 10-mile loop. This is the other trail we take visitors out on if we like them: the Hart Creek Rim Trail. It follows the edge of the bluffs along the northwest side of Hart Creek canyon, looking down on what we rode in this morning. There were no scary thunderstorms this afternoon to deal with, just a few clouds that kept the heat at bay, a nice breeze, and miles and miles of easy trotting in the Owyhee desert, wildflowers lining our passage and and lizards and horny toads shooting ahead of us.

Mickey and I came in with happy mounts (and happy riders), the 55 miles having flown quickly under our swift horses' feet.

Local rider Amy Weidner won the 25 on Angel of Mercy (all 8 finished). Michael Thomas of Auburn California won the 55 on Luanne Holmsen's gelding Kasino GM. Michael can remember the exact date of his first endurance ride: "July 27 2007!" The reason it was so memorable is because Luanne talked him into an 80-mile ride for his debut! He didn't do another endurance ride till Death Valley in December, but he confesses he enjoys endurance. Kasino GM also won Best Condition. 11 of 16 horses completed the 55. Amanda Wilson finished on Jubals Boot Scootin Boogy, making her the only rider to complete all 3 days on the same horse.

The final finisher of the day was the winner, turtle, and Best Conditioned horse in the 75: the stallion DWA Express ridden by Christoph Schork. Express is one of several DWA horses - Drinkers of the Wind Arabians - Christoph and Dian Woodward have had over the years at their Global Endurance Training Center in Moab, Utah. "We like them," Christoph said. "in general they have good bone, good recoveries, good minds, and perform well." Express and Christoph won the Big Horn 100 last year.

The last Blue Canoe meal was a homey affair, mostly the usual local group of endurance riders. Steph's head was still spinning from the weekend, and the results of the 55 miler were a bit out of whack. She pointed to her head. "There's nuthin' left up there!"

It was mostly a good time over all (since we survived it), the 2009 Owyhee Fandango. It wasn't TOO chaotic, except for the two runaway horses, and, on the last afternoon, a turned-over radio guy's RV on Bates Creek Road (he'd pulled to the side of the road to let a horse trailer pass). And all the paperwork - the mounds and mounds of paperwork involved in putting on not just a 3-day AERC ride and not just an FEI ride with its OWN rigmaroles of paperwork, but a 3-day AERC and FEI ride with 4 different distances, and also an AHA Region 4 Championship 100 ride, and a Pioneer ride, (so, if you want to get technical, that's 21 rides, more or less) and whatever else I might have missed. I'm sure we'll be discovering lots more things as the weeks pass. It was certainly a unique experience!

I got to spend some time with friends, get reacquainted with old friends, meet new people, and best of all, the Raven and I got to do some of our home trails on my pal Jose. (Did I mention I love Jose?)

Next year we've already got the Motto for the new 4-DAY ride Steph has planned: All Party, No FEI!" As Steph said, "At least we went out with a Bang!"

Merri
Posted by The Equestrian Vagabond at 3:17 PM