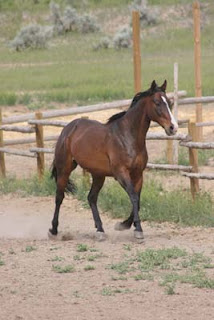 They can just drive the boys crazy, can't they?

We keep the girls and geldings separated here - it's just easier on things, less chance of anybody getting hurt. When a mare or mares come into heat, well, sometimes the boys forget they are geldings and they think they have a few things to straighten out with each other.

Stormy often hangs with both groups. He moved in with the mares two days ago because they were out on the good grass, and he wanted the good grass. He didn't really care about the mares.

Until I separated him today. Without realizing it, Stormy had quickly gotten attached (addicted). The girls were like a drug, and he couldn't get enough, and when he found himself on the other side of the fence, he wanted more! Especially with three of the four in heat.

He trotted the fence and whinnied, and got himself more worked up. The trotting became cantering, which became galloping, 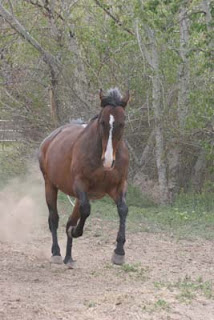 which turned into some full blown sprints. 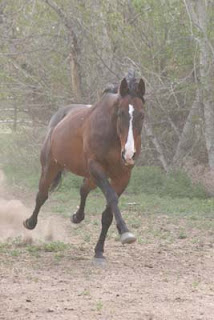 He would dig in so hard with a burst of astonishing speed that his whole body would lower to the ground. 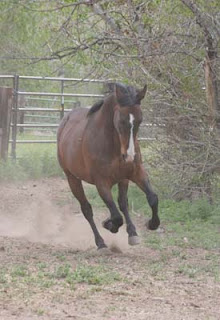 I do not think this horse ran so fast on the racetrack 11 years ago. I didn't know he still had it in him!

He was scaring me after a while, so I finally moved him to a further away pen.

Now he's still working out, but only at a walk, and sandwiching some hay in between. Hopefully in a few hours, all he'll be thinking about is his stomach. 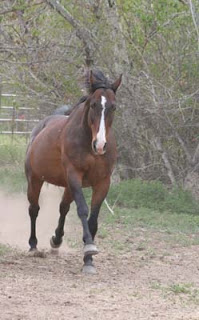 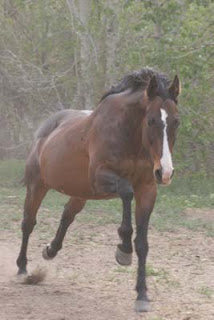 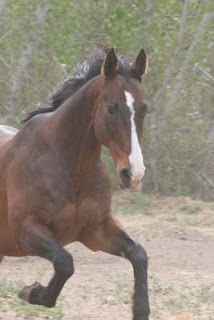 Posted by The Equestrian Vagabond at 7:40 PM