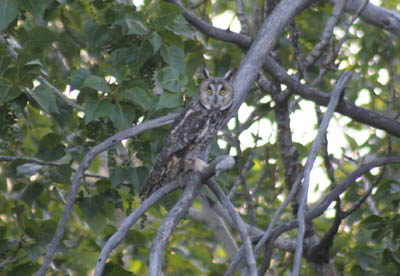 Connie took the dogs for a walk, so I snuck up the crick to get me a dose of some Owl. There's a long-eared owl roost not too far from here, and I like to check up on them once in a while. I don't go around there with the dogs because one human crashing and stumbling through the brush is bad enough, but one human and 3 rabid dogs running crashing panting heavily in and over and around their neighborhood is just too much disturbance. Besides, this is the time of year for babies, so I sure didn't want to bother them if there were any around.

Long-eared owls look similar to great horned owls but are smaller and more slender. They're nocturnal owls that rest in roosts of dense foliage near tree trunks during the day. They're found throughout most of the US except the southeast, and they occupy much of Canada. They forage out in the open, preying mostly on small mammals, and boy are there lots of gophers around here this year. They don't build their own nest, but use abandoned nests of Ravens and magpies. 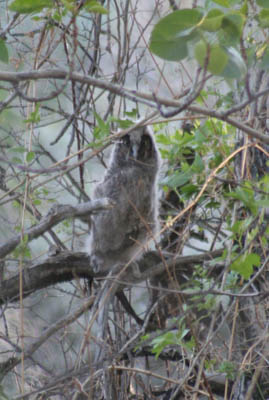 Long-eared owls are amazingly good at looking like a part of the tree/brush/vines they are hiding in. Once the biologist Karen S took me to another long-eared owl roost. We crept right through the area where she knew they normally hung out and we didn't see a one. We walked back the same way a bit later and we flushed at least half a dozen. They'd been there all along; we'd just walked right by them without noticing them. 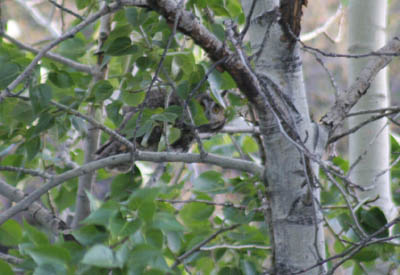 I crept along the crick here, slowly and as quietly as I could - which was about as quiet as a herd of elephants - and sure enough, I flushed a long-eared owl. I followed with my eyes where it went, then looked back to where it came from - and there was a baby! Looking just like part of a tree. I'd have never seen him if the mother (or father) hadn't flown away. I stood still and stared at him a good long while, and he stood and stared at me, unmoving, unblinking. It's their best defense. The parent circled around, to get a better bead on me, taking up different positions, barking a warning call. After a few motionless minutes I moved on, leaving the baby alone. The adult flew further up the creek, leading me away, then circling behind the trees on the other side of the creek and returning in the direction of her baby. And there were probably more babies; I just couldn't see them.

I slowly (and, sadly, loudly) followed upcreek, and soon 2 more long-eared owls flushed. They peered at me from between leaves and branches. One hooted several times, which became more of an insistent WHOO-UP WHOO-UP call. The other barked warning calls. I just stood and watched them a while. One flew out in the open to have a good look at me, and kept hooting. 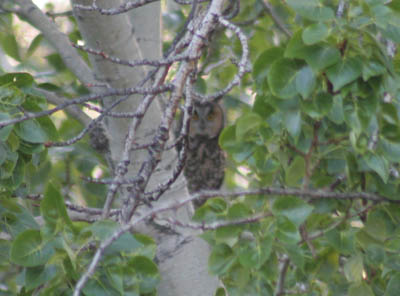 Then it was time to leave them alone - I'd gotten my Owl Fix. "Thanks Owlies," I said. I turned and walked back along the creek (noisily), flushed the mother again, didn't go to look at the baby again. The mother led me away from the baby again, one tree to the next, before circling behind the creek and back his way. 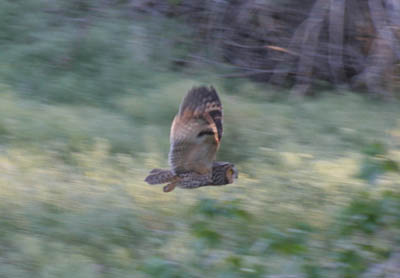 I'll leave the owls alone for a while, now that I got my Owl Fix and now I know they are still there and thriving.

Owl's well that ends well.
Posted by The Equestrian Vagabond at 9:40 PM