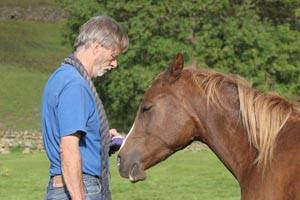 It was a dark and stormy night...

...Unusually cold, wet, and windy - wretched weather for June on the fells of Cumbria.

A mountain rescue group was camping at High House, and Dom had brought the mares and foals into the barn for the people to see and visit with. He had just turned the horses back out, when from a nearby field, the pregnant mare Dominita came up from across the way to say hi to Dom. He said hi, and as she turned away to walk off, he got a glimpse of her tail, and something else - an amniotic sac.

The mare wasn't due to foal for 3 more weeks.

On shaky legs, Dom followed the mare to the very bottom of the field where he found a ghastly sight - a foal, who had just been born further up-slope, had rolled or fallen down the hill, and landed in the freezing cold water of a marsh in this frigid weather.

In the dark and the storm, Dom managed to drag the foal out of the water, "but the foal was all wrong, dreadful."

He ran back to the house and got Jan, and on the way out grabbed a large empty gunny sack (that large loads of gravel are delivered in), halter and lead rope, and they grabbed the mountain rescue leader and another woman, "We have an emergency - we need you now!"

The four ran back outside and down the hill to the mare and foal, where the men scooped up the foal and shoved it in the big sack and carried it up the hill, while Jan caught the mare and led her up to the barn and Laura opened the gates on the way.

They didn't have any stalls ready for foaling since none was expected yet, so they put the foal on bare rubber mats and rushed to scatter straw around it. They looked at the foal, and "It was a nightmare," said Dom and Jan. "She was convulsing from no oxygen, she had no hair, couldn't blink, had no reflexes, couldn't suck, could barely coordinate any movements, and she was freezing cold."

As an understatement, Dom says, "She just wasn't all that good!" They dried the foal off and covered it in straw and immediately called their veterinarian Jane, who promptly came out in the storm.

Jane gave the foal steroids to get its lungs working right, while Jan milked the mare Dominita. That in itself was a miracle because for one thing, Dominita had been a somewhat unbroke and difficult mare to deal with when she arrived a few months earlier, and Jan says, "I had never milked anything before!"

"But the mare was good as gold, totally calm and trusting," and Jan got enough milk from her for Jane to tube it into the foal.

From then on, the fight for the filly's life took on epic commitment. As former mountain search and rescuers themselves, Jan and Dom were used to dealing with emergencies and first aid, but all this was far beyond what they'd ever seen or done. They took hourly shifts for 2 days to attend to the foal. "It was a hellish experience."

The worst part was the convulsions, and trying to keep the foal from hurting herself. "I had bruises on my face and arms," Jan recalls, "from laying on her and trying to keep her head still." The convulsing lasted hours - a day - it's hard to recall how long it went on.

They dressed the foal in dog clothes - from the Atkinsons' dog search days - and hourly took her temperature, then either took clothes off or added more. The foal couldn't stand up to nurse - her skeleton was soft and bending so she couldn't support herself, so she was always laying down. Dom and Jan had to continue milking the mare, then squirt milk down the foal's throat while she laid in the straw.

After a few days, the foal got to where she could stand up if someone lifted her up, so Dom or Jan had to lift her up every hour or so to nurse. After a few nights, Jan found her up on her feet on her own nursing, and that night at 2 AM, the filly wouldn't let Dom take her temperature. "That was great! I knew she'd get better from there."

By the end of the week, the filly was looking pretty good - standing and nursing on her own, and getting stronger every day.

One might wonder why they took a chance on putting so much effort into saving a foal that had been absolutely on the limit of any chance of survival, but the reasons were obvious. "Where there's life, there's hope," says Dom, "and she wasn't suffering. As long as we could stop her from injuring herself, she had a chance." 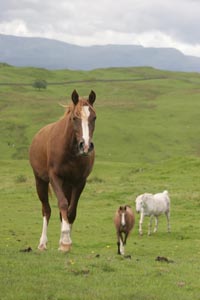 "And mum was being so good," Jan added, always staying calm, and letting herself be milked by humans, letting her baby be handled.

Hanita's a big strong 2-year-old now, not showing any signs of her traumatic entry into the world. "She's very sensible and isn't defective at all."

She is, in short, a miracle filly.

Seren Hanita, by Hanson out of Dominita 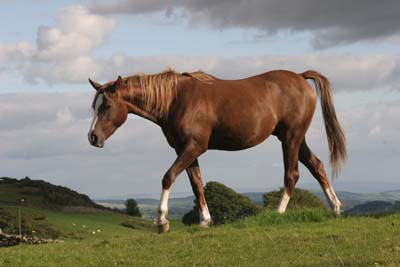 Posted by The Equestrian Vagabond at 5:11 AM