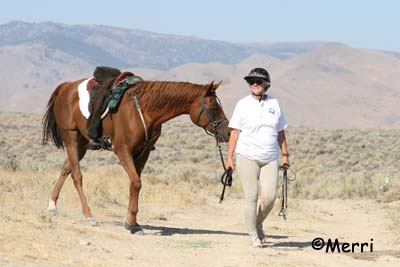 For someone who just accomplished the rather elite endurance riding status of 5000 miles for herself and her horse SS Kharady Khid, it's rather hard to believe that just a few years ago, Carla Richardson was afraid to give the sport a try. "I'd ridden all my life," Carla says, "and I did 25 and 30 miles in CTR (Competitive Trail Rides) for a couple of years, and I could ride all day, but I was intimidated by endurance. I thought I wasn't good enough."

But once she started, she confesses, "Then I got addicted!" That would be an understatement. Of the approximately 220 horses that have reached 5000 miles in their endurance careers (and only about 700 riders) - Carla and 'Khid' have ridden every mile together - they accomplished this mileage in just 3 1/2 years.

It's also hard to believe that Carla bought Khid off the internet, without seeing him in person or riding him first. Then there's the fact that he was six years old and had never worked outside of an arena and had never seen a trail. SS Kharady Khid was a dressage horse. It was his full sister who had caught Carla's eye at a CTR, and when Carla found out the brother was for sale, she did, at least, see a video of Khid before she bought him. "They said he had no vices, and he was doing well in dressage." That was good enough for her.

There was still that hang-up about endurance, though. Carla did a lot of studying before she ever set foot on an endurance trail. She soaked up all the information she could, and she observed endurance riders. "I tried hard to learn before I started, I read everything I could get my hands on, I got a saddle, and I WATCHED people. That's one thing that endurance riders should know: New people are watching them. I watched Dave Rabe, Karen Chaton, Christoph (Schork) and Dian (Woodward), to see what they were doing. I WANTED to talk to them to learn, but I was often intimidated by them - not that they are anything but friendly and helpful - but that's just how I felt. I think that's how a lot of new riders feel." 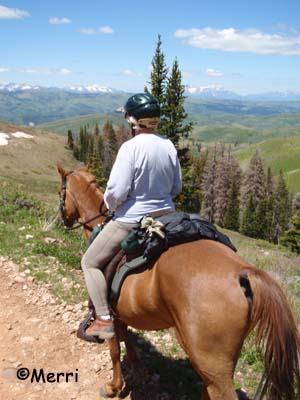 She'd read about Dave Rabe, and when she went to a ride and saw him, she thought, "Wow, that's Dave Rabe!" Dave is sort of an endurance celebrity, though that word probably doesn't exist in his vocabulary. He's a long-time endurance rider, with the second highest mileage ever at over 50,000 miles; he was recently inducted into the AERC Hall of Fame, and he's known for always helping before, during and after rides, and for wearing shorts at rides, no matter what the weather.

Carla and Khid first tried CTR, and two Limited Distance rides before their first attempt at a 50-mile endurance ride, hauling 800 miles from Delta, Colorado, to southern California, for the 4-day Death Valley Encounter. It might well have been their last.

"He was terrible!" Carla recalls. "We got there at 1 AM the night before Day 1, got up at 6 AM, and off we went down the trail. He pulled all morning, pulled and pulled and pulled, then when we came in for lunch, he thought the day was over.

"It was hard to get him back out on the second loop; he was like, 'I hate you!' He didn't want to leave camp, he trudged around the whole second loop until he could see camp again. We were both exhausted, and I was beat."

That might have caused some lesser mortals to rethink their purchase and pack up and drive home and go back to riding CTRs. Or maybe dressage. But Carla and Khid sat out Days 2 and 3 of the Death Valley Encounter, and headed back out on the trail for Day 4. It was a completely different experience. "We had the best time! We rode the last few mile in the dark with someone, and afterwards I thanked The Duck (the ride manager) for my first 100 miles!" 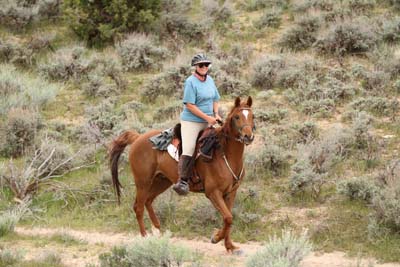 It's Khid's very sweet personality that is endearing. "In one word, 'Honest' is how I would describe him," Carla says. "He's got no tricks, no ploys. Once in a while he'll get upset a little and act humpy, but he's never bucked. He was really well trained. When I got him, he'd never been on a trail - only an arena and around his barn. The first time I took him down a trail - I hadn't realized this. I took him to the mountains, down single track trails and across rivers. He was scared at first - he used to be afraid of mud puddles - now he'll walk into a raging stream and stand there and drink. Now he loves trails."

Along the way, Khid has learned to relax and take care of himself on the trails. "He really likes rides that have grass, because he likes to nibble along the trail." And he drinks well - in camp, he likes to sample every water bucket set out around a water trough. On the trail, "He drinks out of hoofprints!"

"He's gotten so much better about competing with other horses. He used to fight me to go faster; he used to have to lead. Now, he doesn't care if horses pass him. He doesn't like horses following him and finally relaxes when they pass. He's happier alone." That's a good thing, since he and Carla often 'win' their share of Turtle Awards, for finishing last.

Carla laughs about their pacing. "Sometimes people will ask, 'Can I ride slow with you? I'm on a young horse.' They'll ride with me a while, then they get tired of going so slow, and they go on. I don't know if it's a habit? Or just what we do?" Whatever the reason, it works for them. "I'm probably much more treating him with kid gloves more than I need to, but he's never been hurt, never lame, no scratches... I truly want him to last a long time. Now I want to get him to 10,000 miles."

They've had a couple of overtime pulls, and a couple of Rider Option pulls when Carla wasn't feeling well, and only one "lameness" pull last year, when he got a cramp. "He'd never been off, so it was shocking." Another rider pointed out to her it was probably a cramp - it was a cold morning. "He was fine the next day; and the next week he finished the 5 days at Mt Carmel. It was just freaky, just like Tevis."

Tevis: Carla's and Khid's only attempt at a 100 miler, and Khid's only metabolic pull. "Tevis was my screw up," Carla lamented. "I didn't ride him 2 months before Tevis, my saddle was getting repaired, I dilly dallied around, I entered at the last minute, I took 2 days to get there, it was hot in Ely where we spent a night, and he just wasn't ready. We hadn't done any heat training. At Red Star (28.5 miles from the start) he drank, and immediately tried to go down. It was a stress colic, cramps. He probably would have been fine, but I had them put him on fluids just to be safe." Khid recovered from this colic episode just fine, going on to finish 900 more miles (900!) in 2010. Who needs 100 milers anyway?

One might wonder what the secret is to her and Khid's success: "We don't train," says Carla. At all. Khid only gets ridden at rides. It might be a bit unconventional, and that didn't help at Tevis, but it hasn't hurt before or since. It's what works best for him. If Carla could change one thing, it would be to have more time to get to the rides a day early. "Horses are so fragile. Hauling is harder on them than riding. I usually get to a ridecamp the night before, often late, and then ride the next day. But I never leave the same day I finish a ride; I always stay overnight and leave the next day. I just wish he could drive!"

Another factor that has likely helped Khid is that all but about the first 900 miles of his career have been shoeless, and it's been Christoph Schork, one of those 'intimidating' endurance riders, that's responsible. "I think we did around 5 rides using Easyboot gloves," Carla says, "but the rest of the miles were in Easyboot glue-ons. Christoph always found time to do Khid's boots for me." 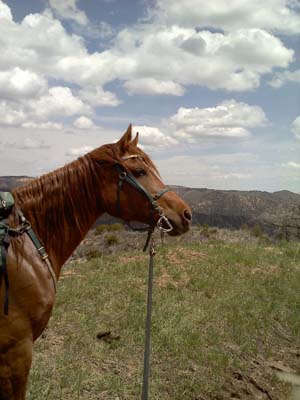 Throughout their relatively short time, but many miles together, several highlights come to mind for Carla. "Our first 100 miles at Death Valley were really a thrill to complete!" Another is the first time they completed a 5-day ride. "It was the Grand Canyon XP in 2008. It was so cold, I was sleeping in my tent, I had frost on my helmet, and my reins froze. It was just great! You ride, you freeze, and you're so relieved to get back to camp alive, and you go out and do it again!" (Khid has completed five 5-day rides.)

Then there was the time Carla drove Khid all the way to Wyoming for a ride, but got her truck and trailer stuck on the road 5 miles from camp. "The 4-wheel drive wouldn't engage, I couldn't get up this one little last hill, and it was midnight. So we camped right there. We didn't make the ride, and I finally got unstuck the next day - and drove back home. It was a sad thing." Maybe it wasn't the best highlight but it was certainly memorable!

Most significant is accomplishing that first, modest goal she'd set for herself: finishing one 50 mile endurance ride. Now she just has one more goal: to get to 10,000 miles with her Khid. "Only 940 miles to go til 6000!" she said after Mt Carmel. "Hopefully we'll get it this year!

"That's the thing that's so cool about this sport. You can approach it so many different ways. There's the FEI rides for the faster riders; you can be a middle of the pack rider and go a lot of miles. But to me true endurance is: to have a horse that goes for many years. There is an art and science to it; horses aren't machines. Horses are different, rides are different, people are different. Some horses and riders don't go together. In someone else's hands, Khid might have been a fast horse..."

But he fell into the right hands and became a long distance, long career horse. At 11 years of age, he's in the prime of his life. Already since Mt Carmel, Carla and Khid are up to 5110 miles.

Thanks for the story,
I have one that pulls,pulls,pulls there is hope for us yet!