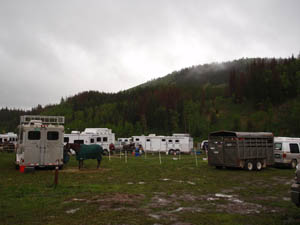 Well, I can't say I was TOO disappointed about not riding 50 miles today, as Sue and I hunkered down in her trailer early in the morning, watching the rain stream down the windows, and watching the horses stick their heads down and their butts to the gusting rain. Nor was I complaining as I poured myself a third cup of Starbucks coffee, perked in Sue's Moka Expresso Maker on her stove in her horse trailer, as she put on layers of clothes underneath her raincoat, preparing to go out.

I did have a little twinge of jealousy, however, as the 16 die-hard 50-milers and the 4 25-milers headed out on the trail, shafts of sun very briefly poking through the clouds and mist as riders whooped and yee-hawed their way northward up the canyon, back into the mist. I went back to the trailer and had another cup of coffee.

The lunch vet check was out of camp, at the Corrals way up Bjorkman road. I went there with Linda Howard, who had ridden the first two days (on her horse that almost drowned in a bog here a couple of years ago), and who was crewing today for her nephew. She had me drive so she could finish her breakfast, and it was all fine until we got to the corrals - where the road turned to a sea of mud in a meadow. Oh dear! I gunned it and whipped the steering wheel wildly back and forth (a learned desperate habit from the sands of Dubai!) so we wouldn't get stuck, and made it to some dry ground and parked. "YOU get to drive back!" I said to Linda. 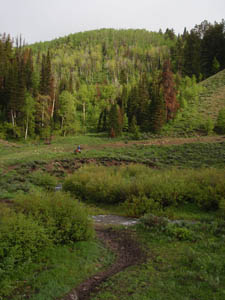 Although she didn't ride today, you could also call Linda a hard core endurance rider. Last year she was in a cast from her neck to her waist, after breaking her neck - on Mother's Day. Of course she's back riding now. Linda has over 8600 miles, and over 21 seasons of riding, she has only 4 pulls! And one of those was a Rider Option - the Almost-Bog-Drowning!

Linda loves multi-day rides, her ultimate goal being to finish with a healthy horse that's ready to go again the next day; and with her record, you could say she excels at them. Her main horse, AM Gypsy Realm, has over 3300 miles in 7 seasons, and 67 starts, with only 2 pulls (one of them the Rider Option for the Almost-Bog-Drowning!) That's my kind of endurance riding too: multi-days, horses that go many seasons, many thousands of miles.

I expected to see Sue arrive first at the vet check on Al, but several others arrived before she did. Marty said he'd seen a horse's tracks that missed the turn down off the snowfield. He'd followed them a ways, but then lost them. When more than half a dozen people had arrived at the vet check, I figured the lost rider must have been Sue! Sure enough, when she finally arrived, she said yes, those were Al's tracks - Sue hadn't seen the turn down the mountain, and she got onto another trail where she did see some ribbons, and ended up following that all the way down before realizing she was on the wrong trail. Then she and Al had to climb back up onto the ridge to look for the right trail down! So Al had some hard extra mileage today that he'd be able to tell Khan all about this evening. 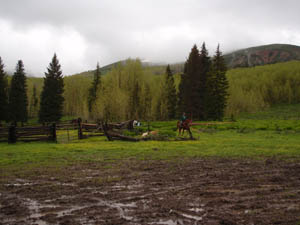 While the sun was just beginning to come out in the meadow, Marty said that up on the ridge, it had been a cold hurricane a'blowin', sleet pounding sideways, the wind trying to rip off the visor from his helmet.

It was a tricky trail today: a hard climb, sketchy footing and wicked weather - and everybody was smiling when they came down, having a good time. Tom Noll said it was great - the clouds would briefly part and give him a glimpse down one of the canyons - before pounding sleet and snow on them again. Tom's horse Frank - his 3rd day on the trail - didn't care about any ol' good scenery, he just wanted to go fast, as usual. Tom and Frank have been having this speed argument for 9 years and 4000 miles now. They still haven't worked it out. Frank was loving the personalized Feed Service at the vet check by Linda Howard, who fetched him his favorite food of the afternoon and held it in a feed bucket right up to his nose, so he wouldn't have to walk anywhere or bend his head down.

After Linda's nephew headed back out on the trail, Linda turned her jeep around without getting stuck, and we drove back to camp, where Khan was sweating under two blankets in the sunshine. I spent the rest of the afternoon, while waiting for Sue and Al to come in, between rain storms that swept through camp, taking off and putting back on Khan's blanket(s), and hanging out our blankets and Frank's blankets to dry, then running and grabbing them and putting them back inside from the rain. 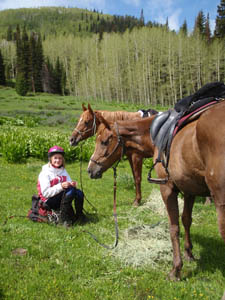 A couple of thunderstorms skirted camp to the west - where the riders were coming in - and I watched (cowered) from the safety of the trailer. Drinking more Starbucks.

Sue finished somewhere around fourth, and after she vetted in, then showed for Best Condition, we packed up, loaded up the horses, and headed to her house outside of Park City. A number of today's riders lingered and camped overnight at Strawberry Fields, enjoying a potluck dinner and the cool clear starry evening in the mountains.

In Park City, Sue and I turned Al and Khan out with their 5 buddies. They all sniffed noses, ran around their paddock in circles, then Al and Khan went to the bestest softest dirt, and rolled and rolled, till they came up as black horses. 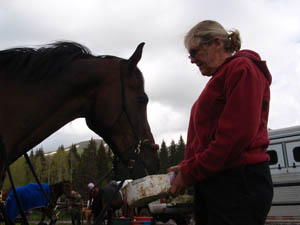 And so it turned out that neither Sue nor I had to worry at all about the new horse I was getting on for the first time at Strawberry Fields Forever - I now have a new pink-nosed equine pal. It was a great weekend, for humans and horses.

www.endurance.net/international/USA/Strawberry
Posted by The Equestrian Vagabond at 8:40 AM