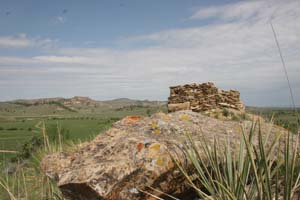 Here's a short list of essential items to bring along if you are planning to go to the Fort Howes endurance ride on the Circle Bar Ranch in southeastern Montana in June.

If you have all that, you'll stay comfortable and have a great time no matter what the conditions.

The first thing you might notice when you get to this ranch 20 miles south of Ashland is the simple beauty of the setting in the rolling hills of the Custer National Forest, at about 3000'. Bill Stevens' great great grandfather homesteaded here in 1883 - he was a former sea Captain from Massachusetts - and Bill and Jan's girls are the 6th generation on this ranch. You could say ranching is in their blood.

You could say endurance is too - this is the 13th year the Stevens have put on the Fort Howes Endurance rides. And there really is an old Fort - it had been put up in the late 1800's, "just in case," though it was never needed for protection. The outer walls are still there, and occasionally a roof is, also. A big thunderstorm blew the last one off, and Bill just hasn't gotten around to replacing it yet. 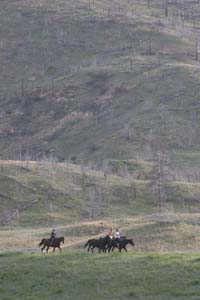 It was warm enough for shorts when I arrived - and it got hot and muggy too, but I'd heard it had been raining the last two days, and more was forecast. Jan and Martin Marsh had come here to Forth Howes from our Owyhee rides two weeks ago - Jan had both her horses entered here, but was sitting on the fence. "We'll see what the weather does. No sense in risking anything if it rains like it did the last 2 days straight."

There were some big rigs that brought 3, 4, 5 horses. Darolyn Butler from Texas brought 2 rigs and 12 horses! Many people drove 2 or 3 days to get here. A lot of riders would be riding the 50, or 75, on Saturday, and the 100 on Sunday. You might say they were a bit deranged, or you might surmise that most FEI riders are either trying to qualify themselves or their horses under the most recent FEI qualification system, for the World Endurance Championship in Kentucky in 2010.

Jan Worthington and Grace Ramsey brought 4 horses from Illinois, a thousand-mile drive. Jan was one who'd be riding the 75 then 100. She'd be on Leon - Golden Lightning - on the 75. Leon and Jan were in the World Championships in Malaysia last year, finished the ride and were pulled at the finish - this after about knocked down by a lightning bolt and getting thrown to the ground. They then finished the President's Cup in February in the UAE, followed by some time off for Leon. He'd just finished 3rd in a 50 last month, so he was ready for a 75. And although Jan probably gets tired of hearing it, it's worth noting that Jan is 69 years old, and is stronger and fitter than most of us. 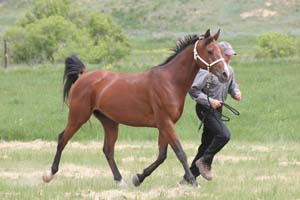 A couple of Utah-ans had shown up - Sue and Tony Hedgecock, and their almost-neighbor, Jeff Stewart. Jeff brought his horse for Sue to ride in the 50 on Saturday, and Sue brought her own horse to ride in the 100 on Sunday. I sort of cozied up to this group when Sue offered the use of her trailer, for coffee, warmth, "whatever you need." What I needed was a Starbucks coffee right off the bat, so I provided the coffee, and Sue provided the expresso maker.

Sue and Tony had gone out for a warm-up ride; their neighbor Jennifer Poling from West Virginia had joined them. They'd gone out a ways, when Sue and Tony were ready to turn back. Jennifer kept going, and going... and got lost out there. She was gone for hours, and eventually Bill took his airplane up to look for her. He did find her, but then I think her crew got lost and they then had to be found!

Vetting in for tomorrow's rides took place in the afternoon, and as evening approached, the Big barbecue grill was fired up. As the now-chilly wind whipped around the big tent, (I now had fleece layers on, not shorts), riders and crews gathered inside for the ride meeting and the best ranch-cooked steak and potatoes meal you'll find anywhere. Jan gave everyone a dismal weather forecast: 80% chance of thunderstorms tonight, 20-40% chance of rain tomorrow. She did remind everybody of the saying, "If you don't like the weather here, wait five minutes, and it will change". 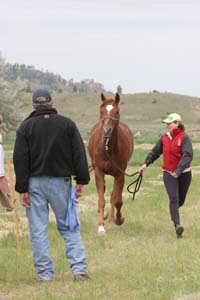 I'd pitched my tent the night before, heeding the warnings of two people: "Make sure you're on high ground! My tent about washed away one year." It was up on higher ground and I figured I'd be fine.

But Jan Stevens said, "There's a comfortable couch in the house up there, you'd better grab it, it's going to get wet out here." "Aw heck, I've got a good tent, I'll be fine." "You'd better take the couch..."

I decided to listen to the locals who know what they're talking about, so I took down my tent, and moved to the house for the night.

Smartest thing I did all weekend. It started raining around midnight, and didn't stop till the start of the 75-mile ride at 6:30 AM.

2009 Fort Howes Endurance ride on endurance.net
Posted by The Equestrian Vagabond at 9:02 PM