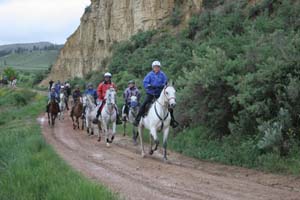 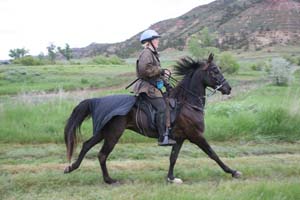 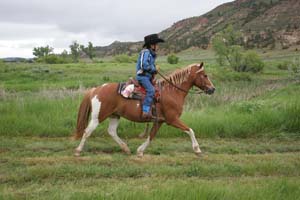 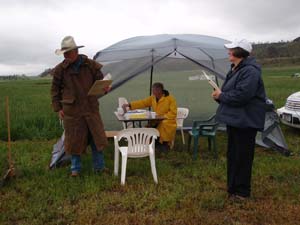 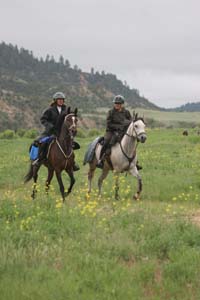 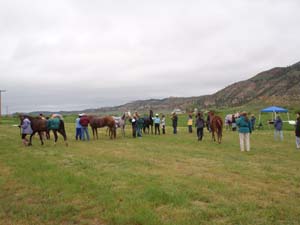 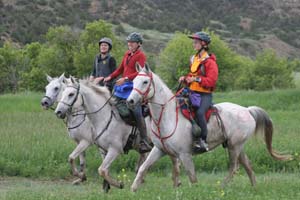 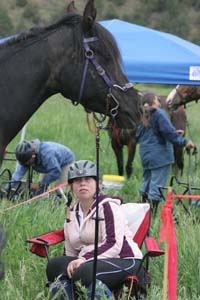 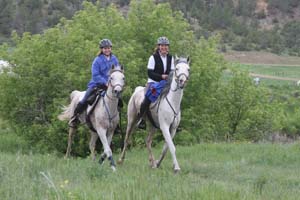 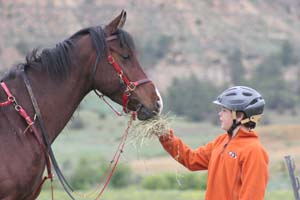 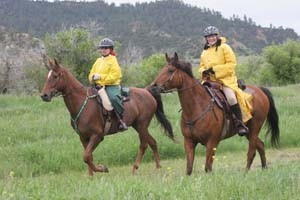 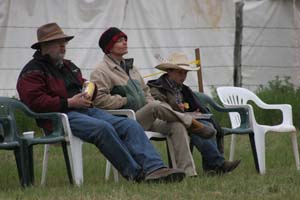 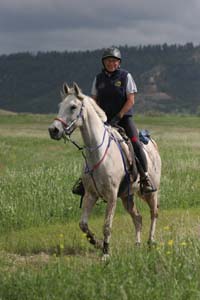 It was some pretty muddy trails under some pretty heavy gray skies that 78 hardy riders took to on Saturday at the 3 distances, including 5 Young Riders and 4 Juniors. But so far: no rain.

I had brought my helmet and chaps with me, just in case, but so far I wasn't regretting not looking hard for a horse to ride. Of course I'm not a wimp, but... you know what I mean.

The twenty-eight 75-milers started out at 6:30 on the first of 4 loops, on a controlled start out of camp up a slick muddy road, underneath the hill on which is perched the ruins of Fort Howes. At the front of the pack were Doug Swingley of Montana on Pal of Mine, Suzy Hayes of Montana on JV Laredo, and Jan Worthington of Illinois on Golden Lightning (Leon).

Suzy has over 18,000 endurance miles, having started endurance 44 years ago, before the AERC existed, and Jan has over 26,000 miles, also starting endurance pre-AERC. Now though Doug is a relative newcomer to endurance riding on horses, having started in 2006, with 'only' 2000 AERC miles, he knows a thing or two about real endurance: he's a 4-time winner of the Iditarod. Not bad company to be trotting along with.

Thirty-six 50 milers started at 7:30 AM, with Bob Steller of Colorado leading the way on his 14-year-old gelding MSA Majestic Star; and the fourteen 35 milers started a half hour later.

The leaders on the 75 were averaging under 10 miles an hour as they came in off their 23-mile first loop, with Ellen Rapp and Jennifer Poling leading the way. Jan and Leon came in a minute later, Leon looking perky and happy. "He's having a great time!" Jan said. "The trail isn't as bad as I thought it would be." You could stay off the main trail and use the grass to either side... though you couldn't see holes or bogs, so you took your chances with that.

Ellen was pulled at this vet gate, and Jan's horse Leon recovered fastest, which left Jan and Leon in the lead going out on Loop 2, with Jennifer just behind them.

Bob Steller led off the 2nd loop of the 50, with Wisconsinite Tom Gower next, followed by mother and daughter team, Karen and Jessica DiCamillo.

Karen's got over 13,000 AERC miles, and 16-year-old Jessica already has over 4300 miles (!). Together they won the Thornburgh Family Award in 2004 with 2410 miles. Jessica's gotten in trouble more than once with all the school she's misses going to the rides, but she's keeping up her homework and grades, and what better education and use of time than endurance riding for a teen!

Jessica's mount, RGS Cimatars Cricket, is "sort of" her horse. She'd borrowed the mare from her mother to do work on one day at their ranch, rode her on the ranch for 3 more days, and then sort of took her over.

Jessica won last year's 75-mile NAYRER Young Rider endurance ride in Colorado with 'Woody' - the horse she'll ride in the 100 tomorrow; they're aiming for the NAYRER ride again this July.

Bob Steller was pulled after loop 2; Majestic Star was lame in the hind end, the same leg that got him pulled at the Owyhee Fandango two weeks earlier. "It's a shame," Bob said. "His pulse was always down, he was going good, we were soaring through the woods like a falcon!" This allegory might have been for my benefit, as Bob calls me the Bird Lady, and I call him the Bird Man, both of us being bird watching fans.

Meanwhile, coming off Loop 3 on the 75, Jan and Leon were increasing their lead, though not intentionally, as they were keeping the same steady pace. "Leon just feels AWESOME! He's just skipping along out there!" Indeed, Leon still looked great, showing no signs of having covered 60 miles on a slick course. "He was downer than a rock" at every vet gate - referring to his pulse: by the time they walked past the out-timer, then past their crewing area, Leon was able to go straight into the vet ring.

The skies were still heavy and threatening, but still no rain; but the temperature was dropping, and a breeze kept everybody hunched down in their thick Carharts (those clever enough to bring them). Karen DiCamillo noted that "It's cold for these flat-lander horses, coming from Texas or New Mexico, where it's almost up to the 90's already!" Their horses had 3 blankets on during their last vet check, and Jessica kept massaging them to keep their muscles loose.

Common trails were getting pretty muddy - the same trail out of the vet gates onto the trails, and the same mowed stretch of the finish. Ridecamp was starting to get sloppy in places too - the 'roads' in the grass through camp where vehicles kept driving, and the path that people were walking to and from the vet gate.

Throughout the day, volunteers and vets and officials kept getting plied with hot coffee and cocoa and various snacks made by Ann Pfeiffer. Formerly the owner of Animal Tacker, Ann now travels around the world to endurance rides (and reining and eventing), baking outrageous unique treats for everybody. She'd been on Bill and Jan's ranch for about 2 weeks baking non-stop before the ride. You don't have to worry about starving or getting dehydrated at any ride that Ann attends.

The 50 mile ride came to a close conclusion: approaching the finish line 3 abreast were the DiCamillos and Sue Hedgecock. In the last 50 yards, the three started a sprint for the line, but Sue thought better of it and immediately backed off, not wanting to risk that last gallop over the finish trail that was getting slick. Jessica edged her mom out for first place... but unfortunately her horse vetted out lame at the final vet check. That left Karen the winner, with Sue and National Security in second.

Jeff Stuart has his eye on the possibility of Kentucky 2010 for his horse, 'Nash', but thinking he's too heavy of a rider, Nash and Sue teamed up with that goal in mind. Nash was sort of a rescue horse. Though he looks pure Arabian, he's unregistered; Jeff got him in a horse trade, but what he got was not what he expected. The horse was very underweight and unhealthy when Jeff got him, and it took 6 months to nurse him back to health. Jeff and Nash just finished 2nd at the Owyhee Fandango 2 weeks ago in the 55 miler.

Meanwhile, in the middle of the pack of the 50 miler were two juniors.

10-year-old Granger Eichhorn rode his first 50 mile ride on his very cute pony with his dad, Kevin Eichhorn, also riding his first 50 on a Quarter horse. Kevin and Granger regularly crewed for Kevin's wife and daughter, but this was the men's first time on an endurance ride longer than an LD. "We had to start riding or else we'd get bored!" After Granger finished, he said, "It was easy." I think his mom and sister may have lost their crew.

Just behind them was 10-year-old Coletan MacLeod, riding with his friend and sponsor, Lisa Sharkey. Coletan and his mom Tara and sisters hauled for 20 hours to Fort Howes down from northern British Columbia with 4 horses.

Coletan rode his 5-year-old gelding Zorro's Sea Biscuit. They're extremely mild mannered and pleasant - both horse and rider. And both appeared to be enjoying their first 50-mile ride. Coletan always had a smile on his face when he rode by.

There was one brief instant during the day - less than two minutes - where the thick gray clouds parted to let a few rays of sunshine down to - where else - the finish line for - who else - Jan Worthington and Leon. They finished the 75 miler 1 1/2 hours ahead of the next pair, Young Rider Devan Horn and DJB Royal Blue Star. Another Young Rider, Kirsten Kimbler, finished third on Cody Canuck.

Grace Ramsey was ribbing Jan all day about how fast she and Leon went, but Jan insisted, "I didn't ask him, he just did it!" And they had kept up the same steady pace all day. "I was riding my race. If somebody wanted to pass me, then fine." But nobody could keep up with them. She was focused on exactly what she wanted from Leon, their goal also being Kentucky 2010. And Leon really looked terrific all day, at the beginning and the end of the ride. He skipped through his final vet exam too, and later ended up getting Best Condition.

It was in fact a family affair for Jan - her son Guy Worthington finished 9th in the 50; her sister Jeanne rode the 35; and two other sisters, Becky and Carolyn showed up. Becky's husband said, "We've learned to come to the endurance rides - that's the only way we can all get together!"

Following the conclusion of the rides was another excellent meal cooked on the barbecue. Starving riders and crews and at least one photographer hung around like hungry vultures waiting for the meat to be thrown on the grill.

Jan Stevens didn't pump the crowd up with enthusiasm for tomorrow's weather. "We're hoping not to have to get snow shovels out for tomorrow." (groans) "Low of 34* tonight. High of 42* tomorrow. Chance of rain: 60% (big groans!). "But remember, if you don't like the weather, wait 5 minutes and it will change!" And, "Wimping out is not acceptable, because our vets and volunteers will all be out there, all day and night."

So in other words, get on your horses tomorrow and ride. I was thinking I was really glad I didn't look hard for a horse to ride tomorrow. Not that I'd wimp out or anything, but... you know what I mean.

2009 Fort Howes Endurance ride on endurance.net
Posted by The Equestrian Vagabond at 7:03 PM