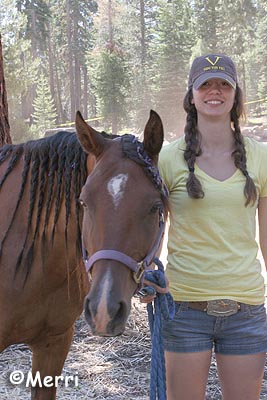 What were you doing when you were 18 years old? If you're like me, you weren't doing anything half as exciting as preparing to fly halfway around the world to compete in a Young Rider/Junior World Endurance Championship, like 4 young men and women from the US are about to do.

Endurance rider Kelsey Kimbler, 18, of Aberdeen, South Dakota, is one of those Young Riders. Currently a full-time student at Northern State University studying biology, she'd never heard of such an event until she was at the AERC (American Endurance Ride Conference) annual convention in March of this year. There she met Belgian endurance rider and author ("Endurance, a French Perspective"), Leonard Liesens, who talked about the Championship in Abu Dhabi on December 10, and encouraged her to work on qualifying for it. When Liesens said Abu Dhabi would pay for the travel expenses for horses and riders, the appealing idea stuck in her head. Kelsey and fellow Young Rider Kyle Gibbon decided to work towards that ultimate international competitive endurance goal, even though the idea seemed "a bit far-fetched."

Implausible as it sounded, that's exactly where Kelsey is headed right now with her mom Kelly, and her older sister Kirsten's gelding, Cody Canuck.

When Kirsten left for dental school this year, Kelsey took over riding Cody Canuck competitively. They completed their first ride together at this year's Fort Howes 75-mile ride in June, finishing 5th. A seasoned endurance horse with 1655 AERC miles, Cody, 14, is the Kimbler family's best horse. "He has a great work ethic... but he doesn't really care for people. He has his moments where he gets a little crazy at times, but he's really OK."

As a youngster, Kelsey remembers her older sister's infatuation with horses. "Kirsten loved horses. She had a toy horse that she played with." When the Kimbler family moved to South Dakota, Kirsten started riding at a nearby Arabian farm. Kelsey was in elementary school when she first got on a horse. Eventually, the whole family competed on the Arabian show circuit.

Around this time father Carl Kimbler saw an ad for the Tevis Cup at his local feed store. Though that seemed an impossible goal because the ride was all the way across the country, the seed idea was planted in his head. The Kimblers rode Arabians. Why not endurance? Why not an objective of the Tevis Cup, the Holy Grail of endurance riders?

Carl Kimbler and his daughter Kirsten rode their first endurance ride together in 2003. Mom Kelly and daughter Kelsey rode their first endurance ride in 2004. (Two more sisters have started since then.) In 2007, Kirsten was awarded the 2007 USEF Youth Sportsman's Award. Kelsey has followed in her sister's footsteps, receiving the 2010 AHA Youth of the Year, and the 2010 USEF Junior Equestrian of the Year and Youth Sportsman Charter Overall awards. Kelsey also won the 2006 and 2008 AERC Junior National 100 mile award for completing the most 100-mile rides of any Junior in North America.

In 2006, at the age of 13, Kelsey and her dad finished their first Tevis Cup together. Kelsey's second Tevis Cup finish in 2010 was one of her most memorable rides, ever.

"My sister Kirsten and I planned to ride together the whole ride and finish as high up as we could, because our horses were in great shape. But Kirsten was pulled at the first vet check, and as I needed a sponsor (in Tevis, Juniors under 18 must ride with a sponsor), I kept getting new ones, because they kept getting pulled. In all, 5 of my sponsors were pulled, and my last sponsor was Barbara White.** It was crazy how things turned out to be. I got to ride the last miles and finish with Barbara [the year Barbara received her 30th Tevis buckle]. I would never trade that experience for anything!"

Kelsey is an experienced rider, with 3345 AERC miles and 13 100-mile completions to her credit. And while Kelsey has competed in 4 National Young Rider endurance rides (winning and receiving Best Condition in 2009 on Junior CAHR), she is looking forward to the unlikely idea that has come a reality - her first overseas ride and first World Championship, and another most memorable endurance experience.


**Barbara White is a Tevis legend, with a record 31 finishes. It's probably safe to say that just about anybody would be honored to ride with Barbara!
Posted by The Equestrian Vagabond at 11:34 AM