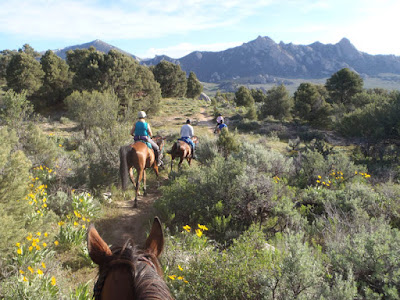 "EPIC" is how ride manager Steph Teeter described the 9th annual City of Rocks Pioneer endurance ride in Almo, Idaho. "We had heat, Thunderstorms (hail/rain/50mph gusts), cold, snow, more wind, the most beautiful scenery imaginable. Still cheerful riders and all of the horses looked great all weekend." (One wind gust blew a porta-potty over. Nobody was inside at the time.) :)
photos/1059

Katrin Levermann, who journeyed 2 full days from British Columbia to get there, also called it epic. "Put it on your bucket list! This ride is epic!"

"Disneyland for horseback riders," said Bobbie Walker, who rode all 3 days aboard Dreamer. "I can’t say enough about that ride. Not only is it a beautiful ride, but there is so much to see in addition to the rocks!"

The horses thrived on the cooler weather. "I've been vetting rides for 40 years," said veterinarian David Hayes, "and I've never seen a better group of horses. They got stronger every day." Head veterinarian Jessica Heinrick agreed, saying endurance is the only horse sport where people really take excellent care of their horses - they have to, to be able to ride long distances.

Indeed, any kind of weather can occur at any time of year in south-central Idaho; and after last year's rather warm and dry and windy event, this year felt more like July with its storms and September with the rather cold weather over the weekend. Not that I, the Ice Princess, was complaining! You just have to get lucky with the thunderstorms (we did this year! They passed around riders and Ridecamp), and if you wear or carry the proper clothing - because conditions can change drastically in 15 minutes - weather won't even be a factor. 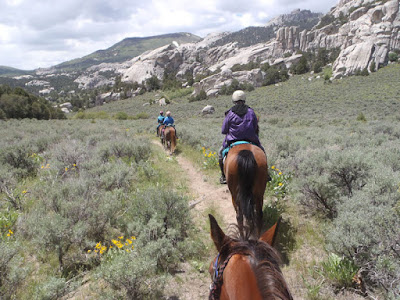 Ridecamp sprawled with a boatload of horses and riders in a grassy meadow just outside City of Rocks National Reserve, at 5500 feet, with a view of Utah to the south and Castle Rocks State Park to the north.

The memorable weather took center stage on Day 2, with trails heading out across the desert and around one Big Bad Bull by a water trough (he was flirting with lady friends so he didn't bother anybody) and over the Boise/Kelton stage route, and by an old stage stop, before heading down the California Trail into City of Rocks National Reserve park.

Most of the 25-milers finished their ride before the weather excitement and its aftermath occurred. 37 started, with 36 finishing. Simone Mauhl and Boogey finished first, just a second ahead of her husband Wade aboard Sundance. Behind Anna McNamer and Dash in third were those mules, Sophie Martin aboard Irish, Trinity Jackson aboard Hope, and Leila Fry aboard Gracie. Boogey got the Best Condition award.

Most of the 55 milers had the (take your pick) anguish/excitement/delight of watching a fierce cold front blow in. (I put my third coat layer on, so it was a delight for me!) We were above the clouds for a time, watching the cold layer of rain/fog shoot over a pass and into the park valley below. The winds had to be ripping along at 50 mph. But our horses just kept trotting onward. During the last miles of the ride we were pelted with hail and snow (yay!), even while the sun shined down upon us lucky endurance riders. Steph Teeter and Connie Holloway drove up into the park with extra jackets for anybody still on the trail who was frozen. We stayed warm riding, but it was the vets and volunteers and ride management in camp who froze, waiting for riders to come in!

Day 3 repeated the trails from the day before, the only difference being the Big Bad Bull was laying down right beside our trail (his lady friends were gone and he looked tired), and there was 0% chance of precipitation, though it did spit a bit of snow on us in the afternoon! 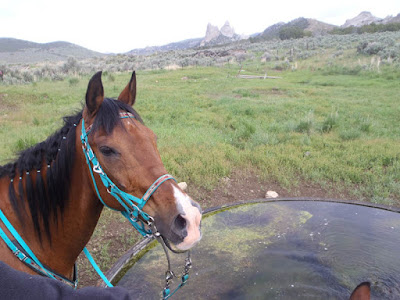 45 riders started the 25 miler, with 44 finishing. The mules took the first 5 out of 6 placings, with Parker Wynn and Irish pulsing down first. 7th place Carrie Johnson and Payback Daysea Duke got Best Condition.

18 started the 50 miler, with 16 finishing. Lee Pearce and JAC Winterhawk tied with David Laws and Che Ole for first place, with Winterhawk getting Best Condition.

The Idaho IronHorse Challenge got off to a great start, with 18 horse/rider teams in contention, having completed all 3 days on the same horse - 4 of them on the 50-mile rides, and 14 on the LD rides.

City of Rocks is truly one of the most beautiful rides in the country. Next year's 10th anniversary is sure to be memorable. Put this Bucket List ride on your calendar.

More photos and stories at:
http://www.endurance.net/international/USA/2019CityOfRocks/


***Fact check: the storms did not miss Ridecamp. Hellacious hail thunderstorms Thursday afternoon... not long after we were congratulating ourselves on such a smooth day. Saturday got pretty interesting in camp too....
- Steph

That's right! I'd been referring to that wicked lightning storm (because we all know how scared of lightning I am) I think it was Friday evening that passed just NW of us in the park, and that looked so scary that Connie and I both got scared out of our tents and took refuge in the back of horse trailers!
- Merri 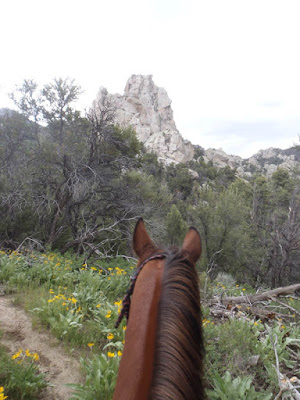 Posted by The Equestrian Vagabond at 7:16 AM