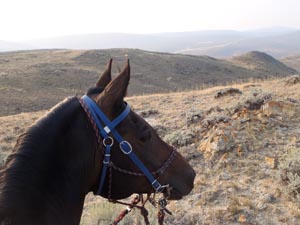 Time for another road trip!

Pickett Crick loaded up and headed to southwest Wyoming for the I Know You Rider endurance ride over the August 21-23 weekend.

"I Know You Rider" is not some random name for a friendly endurance ride, where people happen to recognize each other out on trail, even under helmets and sunglasses. You Deadheads already know that "I Know You Rider" is a Grateful Dead song. Ride manager Beth Buzis' husband John is a Deadhead. And you'd be excused if you mistook him for Jerry Garcia. I hear he also plays a mean guitar.

The Buzis family and friends put on this multi-day ride for the 5th (and last) time, near Evanston. A railroad town in the 1860's, Evanston is now a natural gas siphon (and a guns and shooting territory! Lots of "No Shooting!" signs, and empty cartridges everywhere), and a recreation area for hunting, fishing, hiking, biking, ATVing, snowmobiling. And shooting. 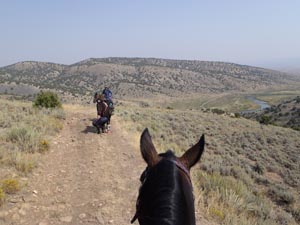 It's also right on the edge of Butch Cassidy territory. Riding in the West makes it easy for imaginations to run wild, and the hills and mountains and the Bear River and the Wyoming wind all make you feel like you could be out there trying to dodge the posse as your dust swirls skyward. I bet you a couple of Butch's horses once laid prints on a couple of the trails we travelled. 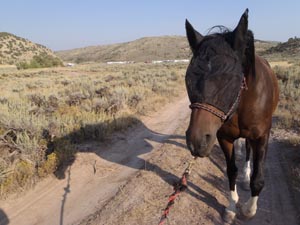 Ridecamp, at 6650', sat in a little valley through which the wind either tumbled, blasted, or roared, depending on its whim (there exists a Windy Wyoming Equestrian Association - wonder how they came up with that name!). Steph, and Carol, and honorary Pickett Crickers Helen and Ann circled their wagons (horse trailers) to shield us and our horses from some of the wind.

On Friday, Smokey and Steph, August and Carol, and Dudley and I headed out on the 50 mile trail. DWA Emigree and Helen, and DWA Nadra and Ann rode out ahead of us, and Saruq and Connie, and Dezzie and Sarah took to the trail behind us. There were only 14 starters on the 50.

I've always felt a little buck in Dudley, particularly at the start of rides. Sometimes he's good, sometimes he's not quite good, and this particular morning, I felt The Dude was going to be a bit amped up. But since the first 3/4 of a mile out of camp was uphill along a rocky trail, Dudley had to pay a lot more attention to where he was putting his feet than where all his hot competition was, so by the time we were at the top of that first little mountain juniper hill, happily, the buck potential was gone!

Deb and Paschal Karl were on top of that first little mountain, taking pictures from spots with great views - that is, if only the smoke from the fires burning up the West hadn't been so bad.

We can blame Deb and Paschal for distracting us from watching the trail, because shortly after we passed those two, we missed a turn and went a few extra hills before we realized we were just following Helen and Ann, but not any ribbons. They had also missed the turn. We missed it because many people tend to watch and follow riders ahead of them instead of watching the trail closely, including us! Once we figured out we had gone wrong, we turned around to find the correct turn and trail; and afterwards, we all turned into eagle-eyed ribbon followers and hoof print trackers. Even the person riding in the back (who usually never watches for ribbons) kept a sharp eye out. We didn't get lost again! 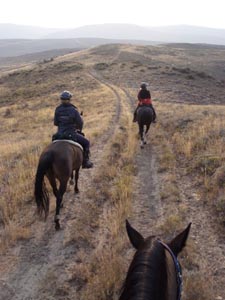 The trail followed mostly 2-track sagebrush- and blooming rabbit brush-lined dirt roads, up high on the mountain flats, and back down into broad valleys. We followed many "Warning - No Digging, Poison Gas" signs, marking the natural gas pipelines buried under our feet, and we carefully dodged the monster badger holes pocking the valley floors. The smart badgers must heed the signs when they dig their holes.

Our trail took us across the Bear River - which all of our horses were mighty suspicious of until they got out into the middle of it. Right about here the three of us were joined by Vicki from Montana, an endurance rider with a cute, energetic Arabian named Stahr Kon and a terrific laugh. "If I had the energy, I'd ride him in a 100!" she said at the end of the day, as her horse felt like he had a lot of gas left in his tank. Our horses paced well together, matching strides and switching off the lead, and waiting patiently for each other when a few boots flew off hooves up the "steep rocky hill" after we crossed the Bear River a second time. (Personally I'd have called this a "steep-a$$ rocky hill"). 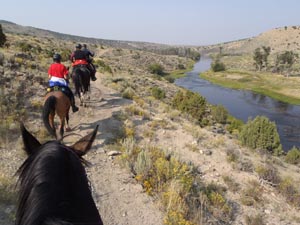 The Bear River was a lovely, quiet meandering flow lined with cottonwood trees, dotted with herons and ducks and coots of all flavors, who were startled by horses suddenly appearing in their tranquil universe.

We had a pulse-down and trot-by vet check at about 20 miles by the Woodruff Narrows Reservoir. There was no hold, but our horses took advantage of the hay and the yummy slop of bran and oats and carrots in a tub, while we ate yummy sandwiches and wraps provided by Ride Management. Smokey had food smeared all over her head and ears and neck, because she never lifted her head from the tub as the other horses lifted their heads and chewed and dribbled all over her.

Back on trail, we retraced some of our dusty footsteps on the 10 miles back to camp. The wind had kicked up by now, but we'd have been awful hot without it. Maybe it was the wind that goosed Dudley (or, possibly the thought of leaving all that good slop behind), because at 25 miles: Dudley bucked! I knew it was in him - but at 25 miles?? That was his only one though. 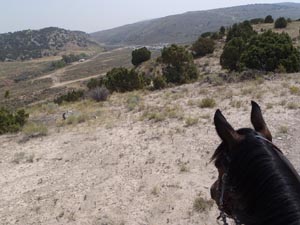 Through another valley, up another hill, we approached camp from the ridge to the west for the hour vet check.

The second loop of 20 miles headed south on a lollipop loop. We had a couple of miles of flat trotting before we came upon Beth's Hill Of Near Death. I didn't hear the story on that one, but the road was very short and steep and rocky, conjuring up all kinds of near-death scenarios. We took the marked zigzag trail down beside it! 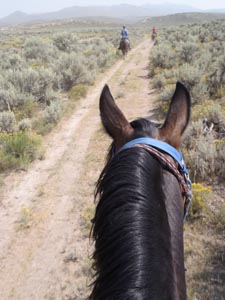 It was pretty warm as we trotted along despite the wind, and we were all, horses and humans, looking forward to that farthest point on the 'pop loop where the horses could get a drink at water troughs and where we'd turn around to head back to camp. I'd joked and hinted the night before at the ride meeting about how delicious Otter Pops are out on trail. 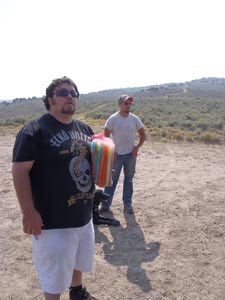 And boy was I thrilled when the humans manning the water stop turned out to be Otter Pop Guys! Otter Pops are truly one of the best treats an endurance rider can get out on trail. Mine was big, red, icy, and stunningly refreshing. The horses had a good long drink. We were all energized after that nice treat as we turned back for home.

The miles flew by, back to Beth's Hill of Near Death that the horses dug in and climbed up (on the side trail!), and in just a few more miles we were descending the hill back to Ridecamp. 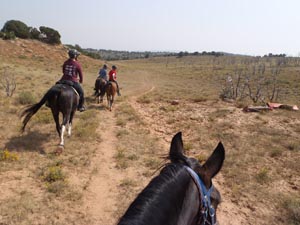 We opted to ride only Day 1 so we packed up and left on Saturday, but it was a treat getting to ride for the first time in Wild Windy Wonderful Wyoming in the Best Horse Endurance Ride in Wyoming, as honorary Deadheads.

More photos can be seen at:
http://www.endurance.net/international/USA/2015IKnowYouRider/

Posted by The Equestrian Vagabond at 3:08 PM