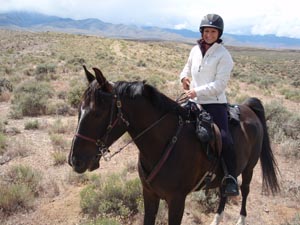 While it was somewhat of a dismal turnout for the 3-day Owyhee Fandango ride, those that did show up had a desert-ful of fun, despite having the most rain over the weekend that we've had in a whole year combined.

On Day 1 it didn't stop 27 50-mile riders from saddling up in the heavy rain and hitting the trail at 7:30 in the morning, nor the 12 Limited Distance riders from heading out (into a little less rain) at 9:30 AM. The rain became showers, which became alternating showers and sunshine for the rest of the day.

Posted by The Equestrian Vagabond at 6:44 PM