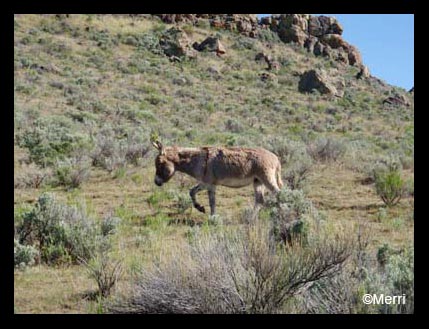 You have to keep your eyes peeled out on the trails here whether you're on foot or on horseback: rattlesnakes, bulls, cougars, and... Jackasses?

Steph and I were headed out to mark trail for the Owyhee Fandango on foot and by ATV (we were pulling the horse trailer with the ATV inside) when we were flagged down on a dirt road by 2 gals running up to us from their parked horse trailers.

Turned out to be our riding friends Karen and Leah, a bit frazzled. "We were attacked by a donkey!"

Steph and I started to laugh... but it really wasn't funny.

"He was with those two wild horses that are back there. The two horses left when they saw us, but the donkey came running at us!"

Karen and Leah had hopped off their horses, but their other friend Linda was not so quick, because she suffers from osteoporosis. The donkey made a beeline for Linda's gelding, and after sniffing noses, the donkey tried to mount the gelding, with Linda still on him.

Linda was terrified and unable to dismount; Leah and Karen yelled at the donkey and threw rocks at him, but nothing would deter him from mounting Linda's gelding. He ignored Karen's gelding and Leah's mare - nothing but that bay mustang gelding of Linda's would do.

Linda finally was able to dismount, and they got the donkey away from her gelding; they started walking on foot, with the donkey following for three miles despite the yelling and the hail of rocks being launched by Karen and Leah.

They arrived at a gate and got their horses through and the gate closed, leaving the donkey braying on the other side; they mounted up to ride off, but within 2 minutes the donkey was behind them, having gone through the fence or gate.

Once they got up onto the flats, Karen took off at a canter for the trailers so she could come pick Leah and Linda and their horses up, as Linda was worn out.

Steph and I were still rather wide-eyed listening to this bizarre tale. Linda was now resting in a chair by the horses. Karen and Leah had come to warn us, since I was headed to flag that trail.

Indeed, as Steph and I pulled onto the road from where I would start hiking, there was a cream-colored donkey hanging with a herd of black cows. We passed him and he looked at us, same as the cows, unconcerned, and rather innocent looking. 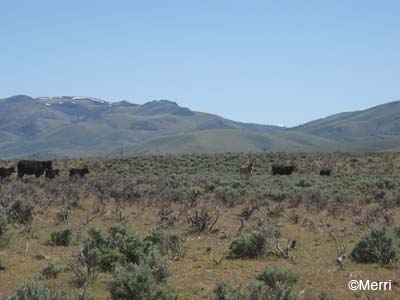 Steph dropped me off and I started hiking, marking a couple miles of trail, keeping my eyes peeled for rattlesnakes and cougars and bulls. I flagged past a red-tailed hawk, circling and screeching above me, warning me not to go to her nest with two babies up the creek.

I passed the old rock corral; 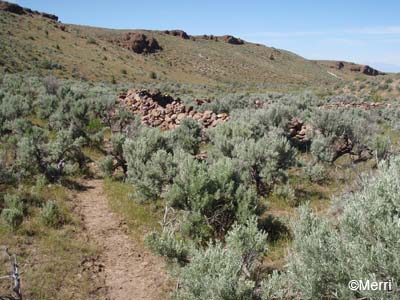 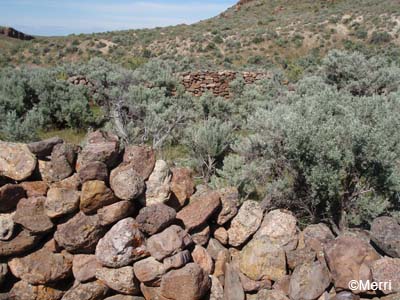 I hiked beneath turkey vultures looking for anything that's been eaten by a rattlesnake or cougar or bull. 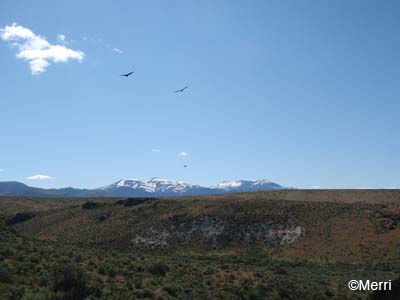 When I was headed back retracing my steps, who did I run into, but the Jackass! (Which means he went through the fence again.) 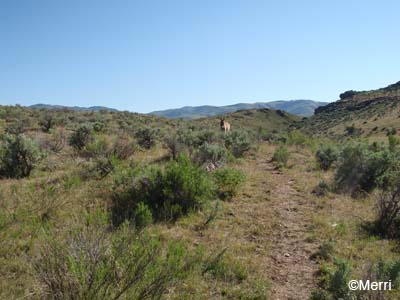 He appeared on the trail in front of me, walking my way. I saw him first. When he saw me, he didn't spook, didn't hesitate, just kept walking toward me. "Well, hello," I said, and he just kept his eye on me, and as he came closer, he detoured off the trail. 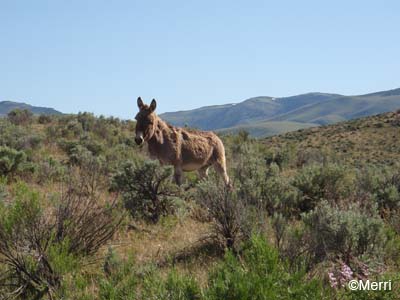 He wasn't in the least interested in me; he wasn't afraid, but he didn't want to get any closer. When he was parallel with me, about 20 yards away, he stopped and looked at me. I took a few steps toward him, and he started trotting on. 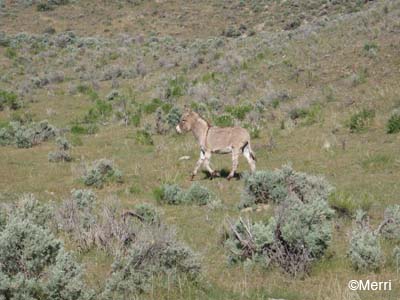 Once he was a safe distance away from me, he turned to look at me one more time, 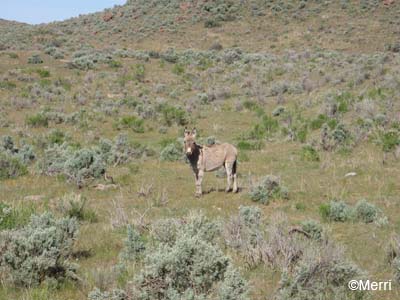 then he moseyed onward. 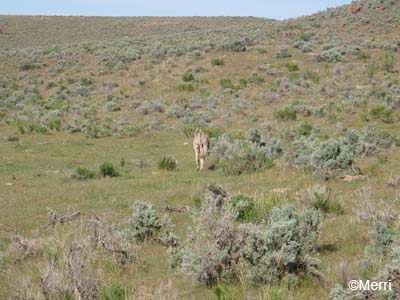 Probably headed back to his mustang 'herd' since the gelding of his dreams was gone.

I'm not sure what to say about the second loop of Day 1 of the Owyhee Fandango... carry donkey repellent?
Posted by The Equestrian Vagabond at 3:59 PM