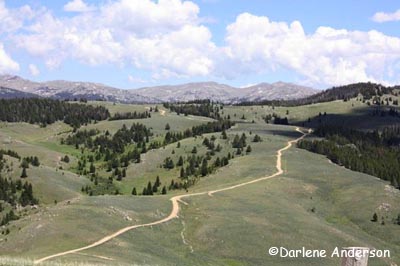 Pickett Creek is going to the Big Horn 100.

I've done Tevis - something I never imagined I'd have the chance to do - and I don't have the searing desire to do it again. (Honestly, I am very proud of my one-for-one record and would like to hold onto that for a while!).

I'd always had it in the back of my mind that I'd like to do the Big Horn also - but never really thought I'd get a chance. Steph has done Tevis twice, including last year. This year she wanted a challenge - but something different, a tough ride without all the hoopla and hype and crowds that come with Tevis: the Big Horn 100. (And they're on the same day this year, July 16.)

Neighbor Carol has wanted to do the Big Horn also. So does Connie. Regina. John. A couple of other Northwest riders. We have the horses: and now we're planning our ride schedule with Big Horn in our sights.

Why would we want to take on such a challenge?

Legendary it is: since 1971, it's been a remote, arduous 100 mile loop through the scenic and rugged Big Horn Mountains in northern Wyoming. The trail starts at 4500 feet; high point of the ride is 10,000 feet. 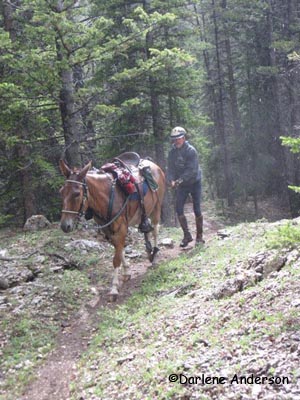 Some of the trail stories - especially since 2004 - are legend, also, such as: the beauty, portions of unmarked trail, getting lost, storms. Based on some of the stories of experiences over the last 7 years one might count on variations of:

Unmarked trail - in the dark:
•"The weather has been difficult this year, and the Big Horn 100 has a very small staff, so it was not possible to mark the entire trail prior to the ride."
•"...this section of the trail somehow remained unmarked. My horse and I remembered the trail from last year and I consulted the maps and my GPS where I might have had questions." - Tom Noll 2004

•"Heading across to the trail I commented that my companions must really trust me because there was no trail and no trail markers and no discussion and it was dark. They responded; 'We have no other choice.' " - Tom Noll, 2006

•"As darkness fell, the absence of the moon soon became apparent. And we realized there were no trail markings."
•"We saw nothing: not seeing, not knowing." - Kevin Myers, 2010

•"There was much discussion about whether the trail was actually going to be marked this time."
•"He had held a constant skepticism about whether the trail would be properly marked once we hit the dark section and he didn't want to be caught somewhere totally unfamiliar."
•"This was understandable because...well, THERE WEREN'T ANY MARKINGS ON THE TRAIL!!" - Darlene Anderson, 2010

Mountain storms
•"Someone forgot to tell the Wyoming weather we were riding that day. About an hour into the second loop a hail and rainstorm came that lasted around a half hour. It was bad enough that we had to shelter in the trees until it was over." - Don Bowen, 2007

•"As we wound our way around the lakes, the skies grew ominously dark again. They would deliver hail and thunder and wind as we trudged our way back down to Jack Creek. Neither horse nor rider was happy."
"The skies were heavy and angry, the wind biting" - Kevin Myers, 2010

•"Thunder and lightening crackled around us and I was thankful for having a cover of trees, meaning NOT being the tallest thing on the landscape." - Darlene Anderson, 2010

•"[My jacket] was sadly, not one bit waterproof, or even water resistant, not even a little."
•"We took extra care going up this gooey black clay stuff." - Darlene Anderson, 2010 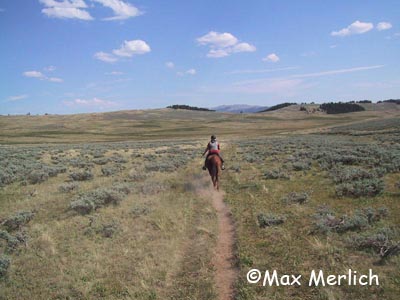 Weariness
•"I could barely stand after I got off, shakey and a little dizzy."
•"The wonderful deliriums of late night riding kept us company, voices, moving lights, cattle wandering here and there (that part might have been real)."
•"By 2:00 am I was wondering if I was in a time warp. By 3:00 am I was definitely in another world." - Steph Teeter, 2006

•"My feet were numb and bruised and it became more and more difficult to choose trail instead of cliff."
•"Horses were lost; people were curled in the fetal position under sagebrush; others still were vomiting." - Kevin Myers, 2010

•"They WERE NOT LOST but did exactly the correct thing. Without GPS with waypoints, visible markers or glowsticks, or any drag rider (or 4 wheeler) to be of help, THEY STOPPED ON TRAIL." - Dr Dave Brown 2006

Real wilderness
•"If you plan to ride the Big Horn, it can be helpful to hook up with someone who knows the trail, especially for the nighttime sections because it is rough, it is long, and it is wilderness." - Tom Noll, 2005

•"I think we saw/heard a bear/mountain lion/tiger/dinosaur just as it was getting dark." - Steph Teeter, 2006

•"I will never forget the third night at ride camp when after dark we heard the howl of the wolves in the mountains around us." - Don Bowen, 2007

•"My heart went out out to her because I knew as well as she did that we were WAY OUT IN THE MIDDLE OF NOWHERE, WYOMING!" - Darlene Anderson, 2010 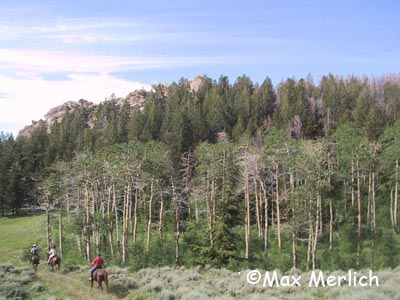 Breathtaking scenery
•"I thought to myself, "How can a 100 get any better? We are riding alone through beautiful mountain meadows on the Big Horn trails at our own pace. Riding the Big Horn 100 trails is living at its very finest."
•"We rode under a full blue sky, the scent of lavender was in the air, and a sea of color was laid before us on the ground...every year I am overwhelmed." - Tom Noll, 2005

•"It was hard to believe that the wildflowers could be so prolific and the views so stunning."
•"And every time we turned a corner, we came across a new high pasture and even more vistas that took your breath away." - Kevin Myers, 2010

•"Oh wow, the crest of this first climb brought a view of the valley and the trout pond we had just passed through! I was speechless..." - Darlene Anderson, 2010

•"The Ride Management was really great and I felt they were really there to help us finish. The whole time I was there I felt like I was family. Thanks Uncle Tom, Aunt Jeanette and the rest of the families for keeping this ride going." - Don Bowen, 2007

Incredible horses
•"I had the incredible good fortune of riding a really great horse (Paladin) on an Endurance trail that has no equal... What an awesome horse..." - Steph Teeter, 2006

•"Willy is incredible and I am blessed and privileged to ride him," - Don Bowen, 2007

•"Far was focused and intent and content with his role. And I was in awe."
•"As I grew more tired and less enthusiastic, Far stayed sharp and focused and ready." - Kevin Myers, 2010

•"I LOVE THIS HORSE and I'M DOING THE BIG HORN ENDURANCE RIDE!!"
•"[My horse] felt so free and happy at that moment that I just about cried. Ok, I did cry a little."
•"I was riding an incredible horse, through incredible country and I had never been anywhere near this free and happy inside my heart. I'll always be thankful to the Incredible Lumpy for that moment."
"Oh man...I can't even tell you what a rush it was to feel THIS HORSE, LUMPY, feeling SO DANG GOOD at this point in the ride!"
•"I held back tears as I hugged Lumpy as fiercely as I could."
•"It was nearly 1:30 am and here we were at the finish of the Big Horn Ride! I got choked up, I broke out in goosebumps all over, and I had trouble breathing from the sheer enormity of what Lumpy and I had just done! I love Nero, you know I do, but I couldn't have loved any horse more than I loved Lumpy in that moment. He had just carried me through one of the tuffest 100 mile rides in the entire USA!" - Darlene Anderson, 2010

•"The canyon trails are not for the faint-of-heart. The trails are very steep and rocky, you are a long way from help, and we had already ridden nearly 75 miles. 'One slip here and someone is going to get hurt!'"
•"...the Big Horn 100 trail is special. There is magic along that trail and that magic works its way into your heart." - Tom Noll, 2005

•"Thoughts of my companions, thoughts of their horses, and the memories of our experiences on the Big Horn trails still bring a tear to my eyes." - Tom Noll, 2006

•"This was one of toughest rides we've done and probably the most satisfying." - Don Bowen, 2007

•"I had finished Big Horn. Max had shucked that Big Horn Monkey off his back. We did it! And we did it in fine style! We finished with HOURS TO SPARE! How dang cool was that?" - Darlene Anderson, 2010

•"...we had to watch for gates and barbed wire and cliffs."
•"...we all knew we were cold and playing some obscure game of chance."
•"At Big Horn everything is unpredictable."
•"At Big Horn you take on Mother Nature and destiny. She is the most unpredictable ride of them all."
•"It was the darkest and most thrilling experience of my life. It was an epic journey that leaves me with a dizzying sense of accomplishment." - Kevin Myers, 2010 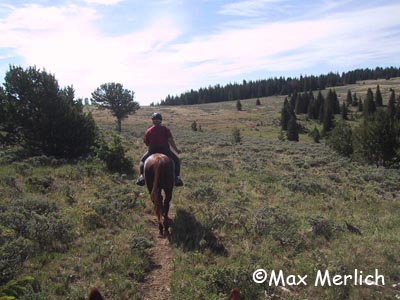 This is my take of my upcoming adventure, from the stories I've read:

Bring your sense of adventure. Ride with someone who knows the trail. Bring your GPS with the track log from another year, in case the trail isn't marked. Have some good rain gear. Put a survival blanket in your pocket in case you get lost and separated from your horse. Bring a good crew! Bring several changes of warm, dry clothing to be waiting for you at the vet checks. Pray for no lightning. Appreciate your horse. And enjoy one of the most beautiful, challenging, remote, and rewarding rides you'll ever get to do.

Read the Big Horn stories for yourself: