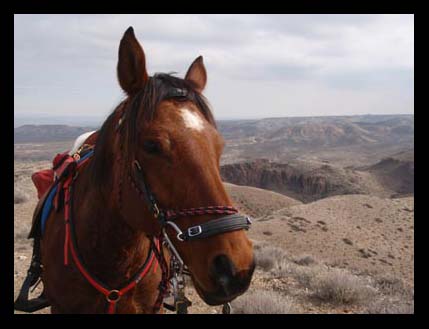 I like to say that Jose has Elf Eyes, because he spots things while out on the trail that I'd completely miss. He always sees deer herds before I see the white butts turn and bound away. Once, on an endurance ride, he spotted a coyote on the side of a hill as we were trotting along. I couldn't see anything. Jose kept wanting to stop and look. I even let him stop and look and I didn't see anything. I told him there was nothing there, and I urged him along the trail, and he agreeably trotted onward while he kept looking at the hillside. The coyote blended so perfectly into the brown brush and dirt, and I only saw it when we were within a hundred yards of it and it moved. Jose's found deer antlers and feathers and obsidian. He even found a GPS once. I've got a box of his treasures.

On today's ride, he first spotted twenty sage grouse when they flew up from the sagebrush. Must be a new lek there!

Next: a cow in the sagebrush... a cow? Perhaps it was a bull? We didn't want to get too close, because that's probably what it was. Some bull obviously didn't read the cow-lander to realize he should have come down out of the mountains four months ago. 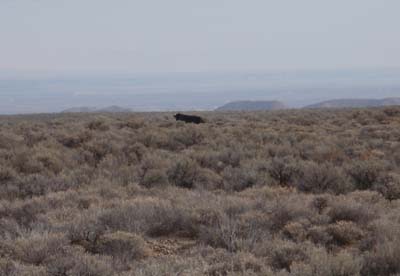 Next: the mother of all deer antlers - and two points are even broken off. 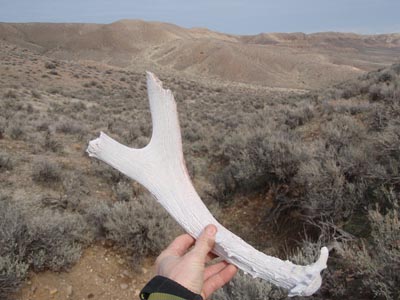 I strapped it on the back of Jose's saddle pack, but as we trotted, it would poke him in the butt and make him swish his tail. I ended up carrying it the rest of the ride. It was heavy enough to know I'd get one big headache if I had to wear a pair of these on my head all the time. No wonder they shed every year!

Next - a stash of calcite crystals. We've ridden by this spot many times, but only now, after a certain amount of snows and rains, the mud has eroded and crumbled away and the crystals have chose to reveal themselves. I picked a few up for Jose. 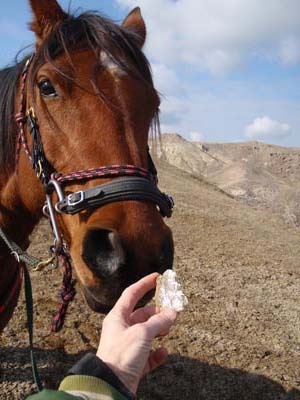 And, of course, always, Jose notices and treasures the views of this spectacular country that we ride in (particularly from high spots). I always wonder what goes on in his head as he gazes at the world spread out around him. 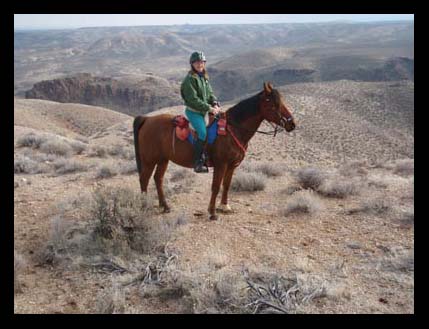 Posted by The Equestrian Vagabond at 9:19 PM

Jose, as he rides along the wide open terrain, "thank you, Lord, for not fencing me in!"