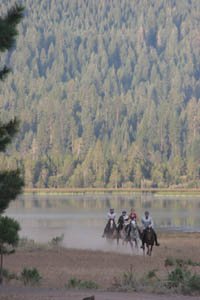 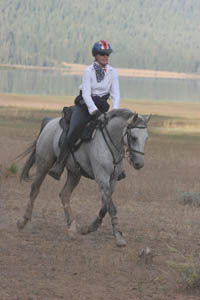 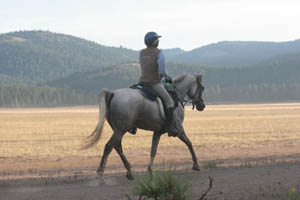 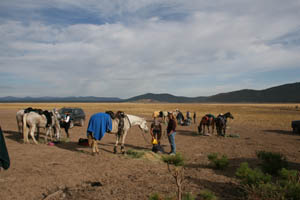 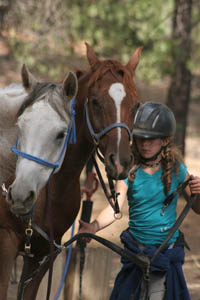 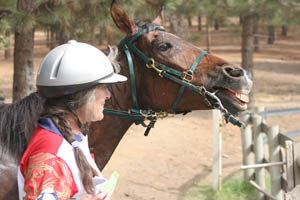 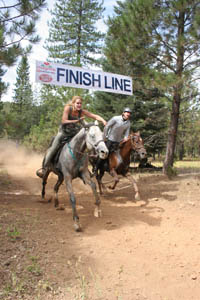 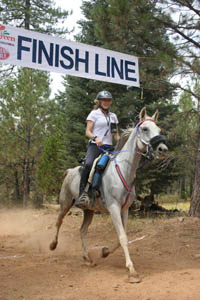 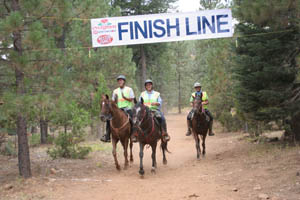 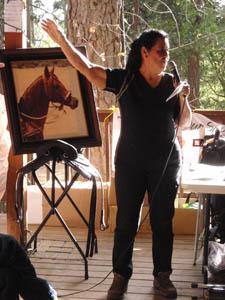 A record number of starters - 91 - hit the trail at 6 AM for the start of the AERC National Championship 50-miler.

From the outset, riders were setting a cracking pace. The 13 mile first phase - the one with the 2500' climb - was covered in less than the predicted 1 hour and 20 minutes based on last year's pace.

The first riders arrived at the vet check around 7:15, skirting Mountain Meadows Reservoir as the sun crept over the hills and across the water in the cool, clear morning. The first four horses cantering together in a group included Ken Keele on Ravenwood Shahbar, and April Cyrek on DB Air Alamahn.

Dr Rob Lydon zoomed by on the dirt road headed further out along the trail, followed by a truck and trailer. A horse had tied up out there on the trail; he was hauled back in to camp and treated.

It was 45 minute drive back to basecamp for the second vet check, and 24 miles by trail for the riders, and the leaders were absolutely flying. April Cyrek and her stallion DB Air Alamahn arrived in camp one minute ahead of Ken Keele and Ravenwood Shabar and Dennis Tracy on San Ffrancisco, with Chuck Centers and Evenstar Bint Solszar 2 minutes behind them.

Ravenwood Shabar was the first to pulse down, giving Ken a two minute lead over April and Alamahn going out onto the final 13 mile loop over DB Air Alamahn. Both San Ffrancisco and Evenstar Bint Solszar were pulled for lameness, leaving Becky Spencer and Alchemy LR in third, and Cheryl Dell and TR Reason to Believe in fourth, going her own pace, with her goal for Reason being a final tune-up ride for the World Equestrian Games Endurance Pre-ride in Kentucky in October.

Heading toward the out-timer, someone mentioned to April how fast the pace was today. "I know - this is the craziest thing I've ever done!" The leaders had cantered most of the way back from the out vet check. The day was a good 20* cooler than Friday's 100, much more conducive to speed. April later said she'd trained all year with the AERC National Championship in mind; Ken Keele's horse was very fit and he had set his mind on going for a win.

Some riders in the top twenty who stood out were Michelle Roush on Awna Flame - the horse looking splendid and carrying himself well; and riders who'd also ridden in and finished the hundred on Friday: Dian Woodward on Halyva Night, Gail Jewell on KD Colonel, and Christoph Schork on Stars Aflame.

Far in the back of the pack, but having a great time and enjoying the wonderful trails, were, among many others, Shel and Lisa Schneider on Barney and Drew, Trail Marking God Dave Rabe riding Rushcreek OK (Dave left soon after he crossed the finish line, to head down to Virginia City, Nevada, to start marking trails for next weekend's Virginia City 100), and 69-year-old Rosalee Bradley, a veteran of endurance riding, on SF Lottie Brown, an appaloosa "with a tad bit of Arab."

The excitement was building around the finish line; with April and Ken sticking together and racing all day we expected a close finish. April's stallion Alamahn had been doing great all day, pulsing down, eating and drinking well, and she'd decided to go for it. It was a decision she would regret later, though hindsight is 20/20. We had a spotter a mile down the trail - Brad Green, who'd jumped in to help crew for April, sent us a text that he could see the two riders getting close.

And suddenly we saw dust, and here they came, turning the bend in the road at a gallop, flattening out in a run the 50 yards to the finish line. The riders were leaning, the horses straining, the watchers yelling (the photographer snapping). They thundered across the line in a thrilling finish, April's horse a head in front.

While our hearts pounded at the finish line, the horses and riders swept on to the vet ring. We were hoping for more racing finishes, but the closest we got was Heather and Jeremy Reynolds holding hands as they cantered across the finish in a tie for 4th across the line.

It wasn't till over an hour later I'd heard that April's horse was pulled at the finish - he hadn't come down to the 64 bpm criteria, which left Ken Keele and Ravenwood Shahbar the winners of the AERC National Championship 50. Ken had 11-year-old Ravenwood Shabar as a youngster and started him. He sold him, and the horse ended up being "too much for the rider," so Ken took him back in 2005. Ken took him on his first endurance ride in 2006. The horse hasn't had any luck in 100-milers, but he's placed first, second, or third in over half his 21 rides, and gotten 2 Best Conditions. Ken likes this horse so much he went and bought his 3/4 brother also.

DB Air Alahman ended up in the treatment barn - not what April had planned. What followed over the next few days was a healthy - or not - dose of criticism of April's ride from many people, after she wrote her account of the ride - one in which she fessed up to mistakes and lessons she'd learned, and this after she "pretty much curled up into a self loathing ball," blaming herself for being unprepared and selfish. "He was treated in front of everybody, IV fluids dripping into his neck for a couple of hours."

It's a mistake many people have made, though what the mistake was is not quite clear. Many people have raced for a finish and end up with their horses being treated. Many people ride their horses carefully and slowly and end up with the horses being treated. I rode with Jackie Bumgardner's great 13,000+ mile horse Zayante on his last 50, at a conservative pace, on his home territory, with a lightweight rider, and for the first time ever, he colicked on us at the farthest point from help and almost died on us. Any given day, something can happen to any of these athletes. Endurance, as one veterinarian has pointed out, is a sport that tends to push horses to their physical limits, but even then, $h*t happens.

April's horse recovered - as did all the horses that were treated this weekend, and although April may take a while to recover, they will all live to ride another day.

Not to be shorted, a group of us waited a while (as in, almost 5 1/2 more hours) to cheer the Turtle across the finish line, Charlie Williams and Bouree of Colorado. They were escorted in by three Sweep riders, who also got a cheer. The SOS riders - Sweep Riders Of the Sierras - covered every mile of the trails on Friday and Sunday, behind the last rider, using amateur radio operator equestrian teams. They are an all-volunteer riding group established to provide safety and on-trail communications for endurance events on the Tevis trail, among other rides, assuring that nobody is lost or injured.

Everybody has a story to tell about endurance, and one we all got to this weekend listen to was the tale of the late great Bezetal, told by his owner Kathy Johnson Thiele.

A couple of riders this weekend had their own special stories.

In June of last year, Luanne Holmsen, a mounted policewoman from Cool, California, was severely injured when her police horse reared up and fell over backwards on her, crushing her hips and exploding her bladder. The doctor told her she'd never do endurance again because she'd never be able to trot.

Another crazy, determined, tough endurance rider is Dian Woodward. Her partner Christoph Schork told us her story. Diagnosed with ovarian and uterine cancer in June of 2007, Dian went through the rough treatment for that. Five months later she did a 50 mile ride, and then she had a bad horse accident, puncturing a lung and breaking ribs and her spine and she was life-flighted out. This weekend was her first 100-mile ride since all of that, and she finished 18th on Salty.

It wasn't an easy ride, however - the last 7 miles of it anyway. She'd been fine, riding alone in the pitch dark, until she came to the last checkpoint 7 miles out from camp. There were two bright lights that seemed to just hit her, making her instantly dizzy and sick. "It's never happened to me before! I threw up all the way into camp. I felt bad, sometimes that I didn't miss my horse!" She even stopped and laid down in the trail for 15 minutes until her horse jerked on the reins telling her it was time to move on. Dian recovered enough, however, by Sunday to ride the 50-miler - and finish 11th (and first Heavyweight) on Halyva Night, a mare she bred, raised, and trained.

Congratulations to both of you crazy, obsessed, determined endurance riders, and to the rest of you out there who have your own comeback stories, and to all of you who finished the National Championships this year.

The same goes to all of the volunteers who helped put on this ride and make it run smoothly, and to the ride manager Kassandra Dimaggio and Centella Tucker. They made everything look so easy.

Merri
Posted by The Equestrian Vagabond at 1:33 PM