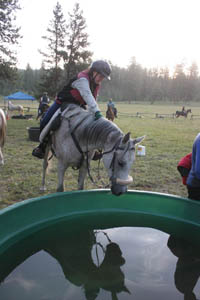 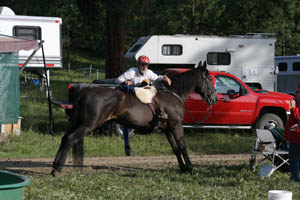 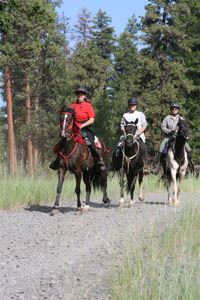 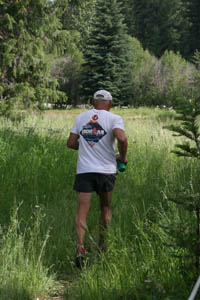 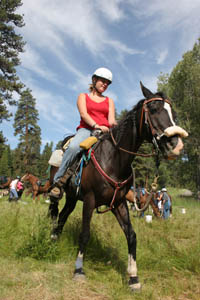 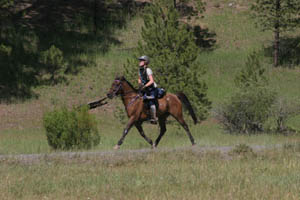 There were a couple of thrills on the first day... a 2-day 100 mile rider was spooked off her horse and broke her collarbone (but she stayed all weekend so her husband could finish - and win - the 2-day 100); a Horse Gone - a Ride N Tie-er's horse got loose when the runner was about to get on him, and he went on down the trail without his rider and runner; and a first time rider on the Trail Ride got dumped off his horse a half-mile from camp... and the horse was gone for 24 hours. The Ride N Tie horse was later retrieved at the Ranger Station, and the missing horse was found by another rider Sunday afternoon, his tack still on, no worse for wear, other than quite thirsty.

The winner of the 30 had her own excitement: on the second loop, Canadian Penny Tanner's Standardbred horse spooked and she lost her balance, and before she could recover her seat, she got whacked by a tree branch. It jerked her neck back and flipped her backwards off her horse. Ira Hickman was one who stopped to help her, and rode in with her. They crossed the finish line together, and it was Penny's horse that pulsed down first for the win. Of the 56 starters in the 30, there was only 1 pull.

The 50 was won by Pat Richardson. In 52nd place, the turtle was Tim Floyd, riding in his first 50. Turtle awards were gold Turtle earrings. Tim said he would give them to his wife. Those were some pretty cute earrings... I'd keep an eye on Tim's earlobes next ride.

12 riders started the 80 miler, and 12 of them finished. Winners were the husband-wife team of Ron Sproat and Carol Giles, from just down the road in Prineville. Another husband and wife team, Lee Pearce and Naomi Preston were 4th and 5th, with Lee and Fire Mt Malabar getting Best Condition.

Four of the seven hundred-mile riders were out to compete for a possible win, and those four are some of the top riders and horses in endurance: Joyce Sousa and her daughter Jennifer Neihaus, Gabrielle Mann, and Michelle Roush. Put the riders' AERC miles together - 43,910 miles - and the horses' records - 14,920 AERC miles, 268 starts with a 94% completion rate, and really, no more needs to be said. These four were always within 15 minutes of each other over the whole course, with Gabrielle and CM Big Easy leading the way.

Gabrielle got Big Easy five years ago when he was 9. His first career was as a racehorse, and when Gabrielle got him, that's all he had on his mind on the endurance trail - racing. It took her a long time to get him to learn to balance himself - get off his forehand and not lean on the bit, canter on both leads; and how to learn to relax, and not have to pass everybody at once. Big Easy knows his job so well now, that he knows which horses are in his race, and which ones to ignore. "The 30-mile horses, or the 50-mile horses, he'll ignore. But when he sees a horse in his distance, he'll focus on it until he gets him!" He's a tough little horse, under 15 hands - "Big horse, little legs," says Gabrielle - and he's one of the kindest ones Gabrielle has known.

They had a 50-mile tuneup in March, winning the Rides of March, before going down to Uruguay and finishing 20th in the 120-km Pan American Championships, and earning a Team Silver medal. June 27th was another win and BC in the 50-mile Chalk Rock ride.

Michelle and PR Tallymark, a standardbred-Arabian cross, last did two days of the Wild West 3-day Pioneer at the end of May, winning and BC'ing one day. Tallymark has 17 BCs over his 53-ride career (that's almost 1 out of every 3 rides, he BCs!)

Gabrielle had a 7 minute lead coming into the next-to-last vet check, with 10 miles to go. She chose, however, to stay extra minutes and let her horse eat more. It was a gamble, leaving camp 2 minutes ahead of Joyce and Jennifer, who took off on the trail at a canter. I don't know which would be more nerve-wracking - having LV Integrity and MC Gallantly breathing down my neck 2 minutes behind me, always looking over my shoulder, or having them 2 minutes ahead of me, and trying to catch them! Michelle was on the trail two minutes behind them.

In the end it was Gabrielle and CM Big Easy who crossed the finish line first, 7 minutes ahead of Joyce and LV Integrity and Jennifer and MC Gallantly, with Michelle and PR Tallymark finishing 7 minutes behind them. None of the riders and horses looked like they'd gone a hundred miles - superior athletes, all of them. Big Easy's ride time for the 100 miles was 11:13.

The other three riders were out to complete the 100... and they did. One of those riders was Dick Root, who rides one of my favorite Pacific Northwest endurance horses, Rocky. A half-mustang, part-something (has to be part draft horse), Rocky is huge - about 17 hands high. Dick, a veterinarian, got Rocky and his mustang mother when Rocky was 4 weeks old. "He had that big ol' head even back then!" Those coarse-headed, big-headed horses remind me of a great Thoroughbred mare I groomed at the racetrack, (many people erringly and unjustly made fun of her looks), so I have a soft spot for them. Rocky's often hard to slow down at the beginning of a ride so Dick uses a strong mechanical hackamore on him, and after the first or second loop, Rocky settles down. Dick has taught Rocky to stretch out and lower himself so that Dick can mount his tall horse easier.

It was Rocky's first 100, and they finished the last ten mile loop in the dark. "Physically he was fine," Dick said. "Mentally, it was harder on him. He's a tough horse though." I petted Rocky's big ol' head the morning after his ride.

Melissa and Becky Fielder rode their last two 10-mile loops in the dark, and finished after midnight, which made 7 for 7 completions in the 100.
Posted by The Equestrian Vagabond at 10:38 PM