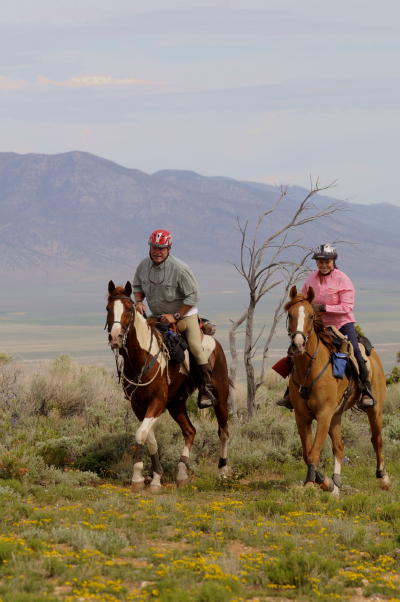 
According to Clydea Hastie, Tevis is One Big Hassle.

First of all, there are the complex logistics of getting you, your horses, and your crew organized; the planning, the packing. Their rig driver just cancelled and as of right now - with 9 days left - they no longer have anybody to drive their rig from the starting point in Robie Park to the finish in Auburn a hundred miles away.

Then there's the trail itself, which is long and exhausting - it's considered by experienced riders who have ridden around the world to be the hardest endurance ride in the world. "The canyons are hard..." Clydea started to explain, then corrected herself. "In fact the whole ride is hard - NOTHING is easy in that ride. It never lets up."

It's unbearably hot in some of the canyons: "Down in one of the canyons - of course they had to tell us this, they had a thermometer down there - it was 114* in the sun, and 103*in the shade. And steep - I was tailing my horse up, and there was so much sweat coming off his belly that it looked like urine." And Clydea didn't even mention the constant climbing and descending - 19,000' of "up", 22,000' of "down".

And it's by no means a safe ride. "The hardest and scariest part is Forest Hill to Francisco's (miles 68 to 85) - 17 miles of switchback-dropoff-downhill-cliff hangers - at night, in the dark, when your horse is leg weary, with a dead mouth." Clydea laughs, "If anybody is going to cry, this is where it will be."

All of that - the prior preparation, the enormous mental and physical stress on the trail - and you have only about a 50/50 chance of finishing the ride, no matter how good a rider you are, or how good your horse is. When Clydea finished Tevis in 1990, it was a 43.2% completion rate.

So - why on earth would you want to do it?

"It's great excitement!" Clydea, 66, started endurance riding in 1969 in California, where she grew up. She first rode Tevis in 1970. "Some of the old people riding then are still riding now! And I'm getting excited to see them again.

This year Clydea and her husband Jim, 62 will be riding Tevis together. Jim tried it once before, and got pulled at 90 miles, "so he sure hopes he finishes this time, so he never has to do it again!"

Clydea will be riding their horse ("it's mostly Jim's") Frozen Assets (Pepe). He's 6 years old, and they've had him for 1 1/2 years. "He's a French-Polish cross, off the racetrack. He's got great gaits - a great smooth trot which Jim needs for his bad back." He's finished all 7 of his starts, but this will be his first 100.

Jim, on the other hand, will be riding WH My Prints (Dakota), a horse that provoked Clydea into laughter when I just asked about him. "He's a screwball! He's an Arabian-saddlebred pinto cross, and he gets into everything. He's a Big Bozo! When he's like that, he portrays his 'Saddlebreddedness.' He's a big strong horse, and opinionated. He isn't gaited, but his legs fly all over the place when he gets excited." Dakota has done many multi-day rides, and has 28 finishes in 30 starts, but this will also be his first 100.

Jim's been conditioning himself for the ride, running a big hill on foot in Scottsdale in the triple digit heat. Clydea says, "Nah, I haven't been doing that. I have a bad knee." She had an ACL replacement 6 years ago, and downhills still hurt the knee. Fortunately, it doesn't bother her when she rides.

Clydea and Jim aren't looking ahead to the finish line; they are taking things one step at a time. "We're hoping to make it through the pre-vet check, then to the starting line, and then we hope to finish." Sounds like modest goals, but in Tevis, they are monumental ones, with an extraordinary reward waiting at the finish line - not just the belt buckle, but the great sense of accomplishment.
Posted by The Equestrian Vagabond at 8:31 PM