The Incredible Lightness of Being Standardbred 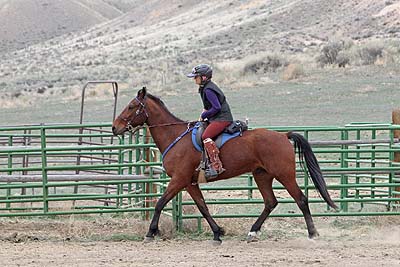 Flying into the fog, nothing but a strong breeze and Willie’s hoofbeats (and an occasional Willie whinny) blowing into my ears.

It’s Willie’s first ride of his second endurance season, the 25 miler at the Owyhee Tough Sucker, his home court. And though I ride him by himself on the trails all the time, it’s only his second time doing an endurance ride by himself. Willie, an off-the-track Standardbred has two modes: endurance horse and racehorse. He’s in his racehorse mode right now, though he’s well out in front by himself (hence the whinnies). He still thinks he’s got to catch somebody, because he knows there are other horses out on the trail, somewhere, and this is a race, even though I’m trying to convince him otherwise.

Clop Clop Clop Clop. He’s going fast, but we’ve reached a compromise: I won’t pull, and you won’t pull, and you can go fast, but not too fast. The second loop we’ll take it easier (I hope). He’s not pulling or leaning on the bit; he’s not too heavy on his forehand, but he’s pounding the ground, and I know he can be lighter. And I know if he’s lighter, he will stay sounder longer.

Even though I dislike it, I’m going to start working on him in the arena on collecting, rounding up, getting off his forehand, lightening up, balancing better. Mostly because Connie and Sarah will be here for coaching and helping! Connie’s an expert in the arena, and though Sarah’s only 15, Connie says she’s better than both of us in the arena.

When Connie starts teaching a horse to round up in the arena, there eventually comes that one certain moment where it just clicks and the horse first drops his head. That’s the start of the inkling of the idea in his head. Eventually (could be 10 minutes, could be 10 days, with the thicker headed horses or the ones who haven't discovered those different muscles yet), he gets it, he knows what he’s supposed to do. And depending on the horse, it can take a lot of riding the horse (as in, not being passive), a lot, and a lot of leg, a lot, (which I don't always have) to teach a horse to be able to default to this way of moving. It’s a workout for horse and rider. Once he starts getting it with Connie, that’s about when I can get on and start asking for it. 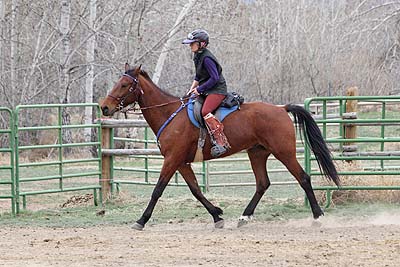 This and top pic, at the beginning of the lesson with Connie

So we started today, in the arena. Connie got on Willie for the first time (“Wow!”), and after about 10 minutes, she had Willie starting to figure it out. Leg leg leg means go forward, but back off the bit and drop your head for release of pressure.

Another 10 minutes and he was already starting to carry his head lower more of the time, working up a mighty sweat.

If a horse hasn’t learned to round up, they use different muscles when they do. It will take some time to build those muscles up where it will be easy for him to carry himself that way. It will build up some of my arena muscles too, which aren’t very good (and with progress, maybe I won’t dislike it so much. Or not…). 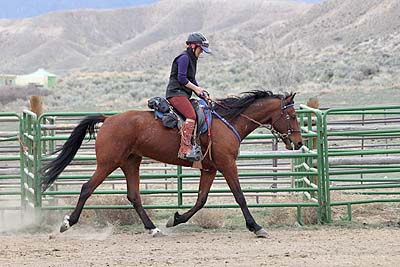 He’s starting to get it!

After Connie worked with Willie a while, (“This is totally do-able with him, you'll be able to do it.”) I rode him and got some occasional good balanced movement, then Sarah rode him too (for the first time, she loved him - he’s unlike any other horse she’s been on - “he’s funny!”). Already, Willie sounded a bit lighter on his feet than the clop clop clop clop. 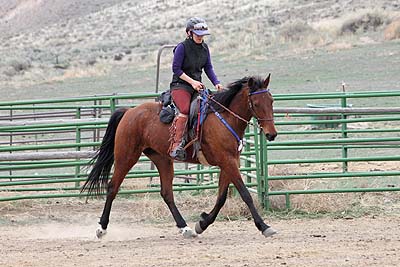 Willie was a flatlander horse with a flatlander butt when Steph got him in February of 2016 as a 4-year-old. After he was broke to ride and had a year of trail riding, I started conditioning him for endurance: sand and hills, hills, and hills, to build up those butt muscles so he could motor up the hills. He grew those butt muscles, and completed 5 50-mile rides last year; and now he’s going to work on the balancing/rounding muscles.

I’m getting it, I’m starting to get Willie to get it with me 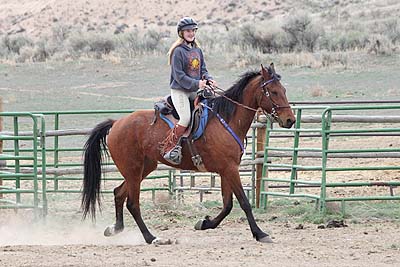 Willie’s cracking Sarah up with his camel-like pace-a-lope here, which sometimes emerges from within


Posted by The Equestrian Vagabond at 7:11 AM

When Fiddle does the loud clop-clop-clop it feels like she's pretending to be a draft horse, riding down the enemies of the King. Or whatever. Lotsa power, but hey, lighten up!

Then she collects and lightens, and it's like riding a freight train but only steering with one finger, because she's controlling all the power. So much fun to ride.

I hope to see you and your big guy in September at the STB Championships!

After our second clinic with our favorite western pleasure people, Tuffy learned to round up drop his head and the trot is amazing. This has translated over into a stronger back, his topline is getting better, and he is able to carry himself nicely through a small circle without collapsing in.