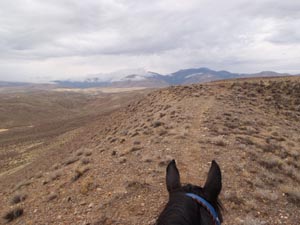 You'd be forgiven if, because of the weather, you mistook it for a spring Owyhee Tough Sucker ride. With some Saturday weather forecasts more dire than others (like, 90% chance of rain all day and 45*, or, just 40% chance of rain starting in the evening), co-ride manager Steph Teeter challenged, "The Owyhee Hallowed Weenies is on, we're going with the Channel 5 weather forecast (forget the others…) - high of 53 (that's not too bad) and 40% chance of showers - that means 60% chance of no rain! So if you're still debating, don't be a Weenie...just get Tough and come on out."

People came from as far away as Washington state, and Ely, Nevada, either undaunted by the weather forecast, or, already on their way so that it was too late to turn back. A small but decent number of Owyhee Tough Hallowed Weenies Suckers (25 of them) did turn out (plus a number of volunteers who showed up just to help) and saddled up in the chilly morning under heavy darkening skies, and set out on 25 miles and 50 miles, Halloween costumes covered up under raincoats. (The Raven dressed up too, but he was stuffed way down in his Raven bag on Dudley's saddle!) 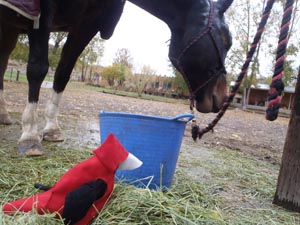 The Raven had one of the best costumes. Can you tell he's a cardinal?

The rain started around 10 AM, and continued steadily until the last rider came in near what would have been sunset, if said sunset could be seen through the still-heavy and dark rainclouds. The temperature dropped to the mid-40's and the wind picked up during the day, but, once you were out there on a horse, it really wasn't unpleasant, particularly if you had enough layers on, and, if you were a horse, you had a heavy winter coat already, which many horses did! 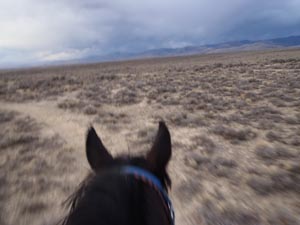 It really wasn't so daunting, once you were already out riding!

Winner of the 50 was 8-year-old mare OFW Alivia (aka "Ali, as in Ali McGraw") ridden by veterinarian and endurance rider and ride n' tier Dick Root. Dick and Ali came thundering in one second ahead of Errol Fife and OMR Pristine. Ali also got Best Condition and a perfect vet score! "I think she's going to be a good one," Dick said. This was only Dick's second ride this year (the first was an LD on Ali in June), since he's been vetting rides instead of riding in them.

Errol's brother Kent rode 20-year-old Charlie to 3rd place on their first endurance ride ever, finishing 41 minutes behind the first two. If he hadn't taken a wrong turn on the last loop and ridden an extra 5 miles, he'd have been even closer! 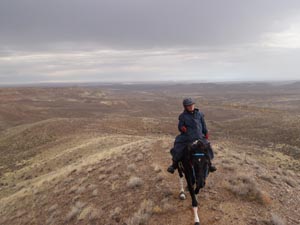 If you timed your ride right, you saw only your riding partners Carol and August on the entire 50-mile trail!

Ten of twelve completed the 50 miler, including 10th place Carla Richardson and SS Kharady Khid. The ride put Carla at 11,000 AERC miles (Khid has 150 more miles to go for the same plateau).

All thirteen riders completed the 25-mile ride, including Steph Teeter, who slipped out on her 24-year-old former international FEI half Orlov-trotter gelding Nature's Khruschev (aka Krusty), coming in 7th in 3:21, and stealing Best Condition. "40-40 CRI!" she said of the big, old, black, heavy-winter-coated gentle giant. Carrie Johnson and Montana's Echo won the ride in 2:59. 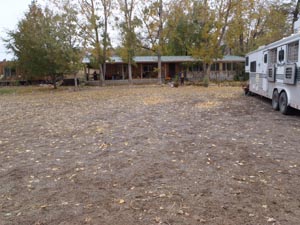 If you timed your ride right, this is what the vet checks at base camp looked like!

Ride manager Regina Rose's famous potato-cheese soup warmed up riders for the awards dinner, where finishers and non-finishers alike took home little Halloween spider plants overgrown by Steph's green thumb. Veterinarian Matt Dredge and his daughter/assistant Ashley drove 4 1/2 hours to vet the ride, intrepidly taking on the weather with the rest of the Owyhee Halloween tough suckers. It was, all in all, a good end to the ride season! 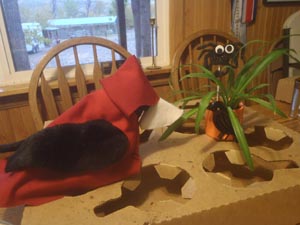 The Raven got a spider plant in a Raven planter for his finish on Dudley!

More photos, and results, at:
http://www.endurance.net/international/USA/2014OwyheeHallowedWeenies/

Posted by The Equestrian Vagabond at 1:16 PM