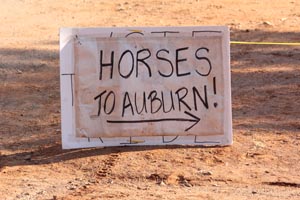 "The heat changed EVERYTHING," Kevin Myers said Sunday morning, after tired riders and crews congregated at the Tevis Cup awards. Myers finished 5th on Auli Farwa (their 4th straight Tevis finish), at 10:58 PM. "It was hellishly hot and humid."

Hopes and strategies were affected by the extreme heat on this year's Tevis trail, particularly the deep canyons that were rumored to be as hot as 118°F. "There was this layer of humid mist that just sat on the canyons," Myers said. 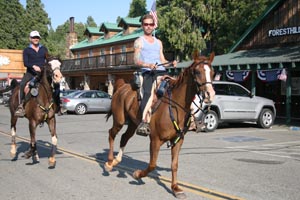 Winners Rusty Toth and 8-year-old Take a Break (Quake) were judged fit to continue at their final vet check at the finish line at the Auburn Fairgrounds at 10:12 PM Saturday night. The pair never owned the lead till 5 miles from the finish line. "The game plan was to try to get to the front sooner than that," Toth said afterwards, "but today the heat and humidity slowed me down quite a bit. I'm from Durango, and we have no humidity. This was very challenging weather-wise for us."

Of the 160 starters, 75 completed. 27 horses were pulled for metabolics, and there were a number of rider options, some of them related to the heat. Clydea Hastie, a tough-as-nails 10,800+ AERC mileage rider and 6-time Tevis finisher from hot Arizona, was one of those. "My horse was fine, I wasn't!" Hastie said afterwards. "I had to get off my horse and sit for a while at the bottom of the second canyon. My legs were complete rubber!" EMTs monitored her condition for half an hour. Once Clydea made it to the top of the canyon and to Michigan Bluff, she pulled herself. A friend rode her horse on into Foresthill, where transport out was much easier for the horse.

"The ride was HARD!" said Melissa Ribley of Grass Valley, California, riding 14-year-old Sakajawea. She would know, being a 19,000+ AERC mileage rider, and going for her 10th Tevis completion. After the heat of the canyons, she told her husband and riding partner Robert (32,500+ AERC miles and (now) 13 Tevis finishes) riding the 8-year-old Appaloosa gelding Crow Pony, "We're never doing this ride again!" She was kidding of course, and was beaming when she received her 1000-mile buckle from Robert at Sunday's awards, after they finished in 53rd and 54th place at 4:32 AM. Melissa is the 71st rider to receive a 1000-mile buckle.

By the first hour hold at Robinson Flat at 36 miles - sometimes referred to as 'the Pressure Cooker' for the intensity of the crewing situation - 21 horses had already been pulled, including a horse who suffered a severe fall, and had to be euthanized. 10 more riders were pulled at Robinson. Temperature at Robinson Flat was still mild, in the low 80's. 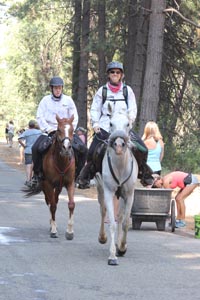 First riders into Robinson were mother and son team Karen and (Junior) John Donley, of Palm Desert, California. John just squeaked out his first Tevis finish in 2012 with 10 minutes of time left on the clock, after having changed sponsors when his mom was pulled earlier. He was again riding his 10-year-old mare My Mamselle, with his mom riding 11-year-old Royal Patron. The duo led by 5 minutes out of Robinson, and still held the lead by minutes coming into Deadwood at 55 miles, where Jenni Smith and Jennifer Waitte took over the lead by 5 minutes. Those 4 traded the lead until Foresthill at 68 miles, where Jennifer Waitte left first by 2 minutes. The "Two Jennies" (also humorously referred to by Rusty Toft as "the poor Jennies") rode Jennifer Waitte's homebred mares, 9-year-old M Dash Czoe (Waitte) and M Dash Stellar (Smith). They had the Tevis ride in mind all year, having previously completed three 65 or 75-mile rides to prepare for it, where they finished first or 2nd in the last two rides. Both horses looked great leaving Foresthill, cantering through town on their way to the California loop trail, Waitte in first place, and Smith in 4th, 5 minutes behind her. 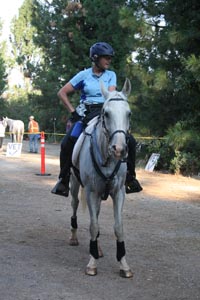 Positions of the top riders stayed much the same at Last Chance checkpoint at 50 miles, with the Donleys still in first by 2 minutes over the Two Jennies, followed closely by Willemina DeBoer, Myers, Reynolds, and Toft.

The heat of the canyons caused many horses to become inverted - their respiration was equal to or higher than their pulse - and caused many riders to slow down. 21 more horses were pulled at Deadwood at 55 miles after the first canyon, 6 of them metabolics, 7 of them rider options. Watching the rider board at Foresthill was something you did and didn't want to do, for the disappointment of seeing another one of your favorite riders on the pull list. Groans could be heard when someone saw a friend's name: "Awww!"

10 more riders were pulled at the second hour hold, at Foresthill, including Barbara White, (Awww!) who herself was recovering from a horse fall the previous Monday. The accident "left me with a pretty useless left knee and bruised ribs. I thought I could gut it out, but it took its toll on Djubilee's back which became very sore," White said later. While disappointed in not finishing, she was proud of her mare, and she was looking forward to presenting some of the awards at the next day's ceremony. 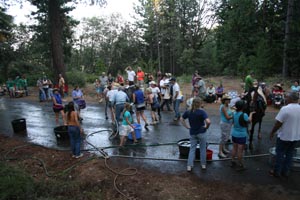 Arriving at Foresthill after 68 hard, rocky, and dusty miles of trail, is an oasis on the Tevis trail, a half-mile long walk under shade trees lined by dozens of waiting crew members and Tevis groupies, cheering the riders and horses in to the vet check. Volunteers jump in to hose off horses and hand out carrots to the hungry horses. It picks up the spirits of tired riders, and the horses know they're at a rest stop. The horses and riders have an hour hold to eat and rest up for the last third of the Tevis trail. All would be riding at least part of the 32 miles in the dark, much of it along cliffs high above the American River. 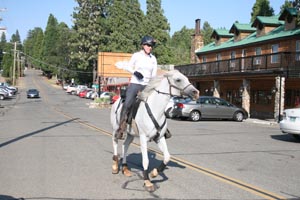 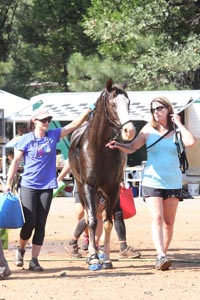 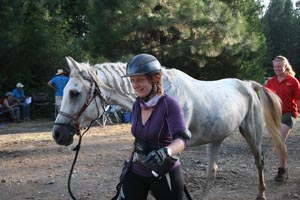 Sue Hedgecock and LZP Julioslastchance left Foresthill in 11th, 49 minutes behind the leader; with Beverly Gray and Jolly Sickle 8 minutes behind her. The final vet check is at the Lower Quarry, at 94 miles. The Donleys were the first into the Quarry, followed 2 minutes later by Toth and Waitte and Smith, and 7 minutes later by Myers and Schork, with Jeremy Reynolds arriving 3 minutes later. Reynolds' horse RR Chances was pulled here for lameness. John Donley's mare was having trouble pulsing down, and she was slightly lame behind; the vets held him longer to see if the mare would improve. His mom (and sponsor) stayed with him, giving up her lead.

From here on, with 6 miles to the finish, the web-watching audience was left suspended, as the webcast did not update! It wasn't until Toth and Take a Break suddenly and surprisingly came bombing into the stadium at Auburn that the fans at the finish knew who was in front.

The Two Jennies actually left the Lower Quarry in the lead by 2 minutes over Toth, and at the awards next day, Waitte described what happened next:

"My riding partner and I, Jenny Smith, who finished 3rd… We were heading home, in first and second place on the road coming up to Highway 49, and something BLEW BY. And we went 'What was THAT!?' It was like it split hairs!

"I asked Jenny, 'Did you see anything?' We just felt this breeze up the back of our necks. It was Rusty!"

Toth added his own version: "…I didn't get the lead till 5 miles from the finish line. The last 2 riders left about 2 minutes before me...

"This horse is off the track, and he's got the most amazing canter, ever. And I knew we could catch them, and we went for it. I just dropped the reins, and let him go…

"I caught the '4 Jennifers' after the Lower Quarry." 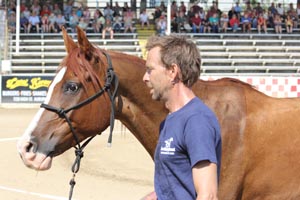 Toth and Take a Break finished 17 minutes ahead of Waitte and Smith, followed by Schork, 17 minutes later. Myers and Auli Farwa were 5th, followed by a solo Karen Donley, whose son's mare had finally been pulled at the Lower Quarry. Mark Schuerman and French Open finished 7th, followed by Sue Hedgecock and LZP Julioslastchance in 8th, Beverly Gray and Jolly Sickle in 9th, and Ann Marie Barnett and Ravvens Allune, a 12-year-old Arabian mare, in 10th, at 12:45 AM.

The Global Endurance team completed with all their horses: Australian Rose Ross and Stars Aflame finished 11th, Britain Sally Toye and GE Honky Tonk Hector finished 10th, and Ecuadorian Nathalie Weemaels and Pico (SBD) finished 21st, at 2:34 AM. Ross said at the awards, after receiving her first Tevis buckle: "Crikey! You Americans are so lucky having a trail like this! Keep it going!"

Every horse and rider who finished this hot Tevis ride was notable, but particularly exceptional finishers were Hal Hall and PR Comet, in 34th place at 3:32 AM for Hall's 3000-mile Tevis buckle; Joyce Sousa and 20-year-old, 8000+ mile LV Integrity, in 35th place at 3:35 AM for their 4th Tevis buckle together; 3 of the 4 Blakeleys in 42nd to 44th place at 3:55 AM, with junior Sanoma Blakely finishing her first Tevis on Taii Myr (brother Barrak was unfortunately pulled at Francisco's at 85 miles); Japan's Hiromi Kitaike finishing on Patrick's Fire in 51st place at 4:27 AM for her 3rd Tevis completion in a row; and the tail enders Ed Seider riding Il Remirame, and Michaela Costello riding Nubira, finishing at 4:58 AM. 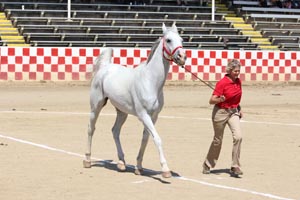 The next morning's Haggin Cup judging was a whirl of emotions for the 9 riders who showed, and for Dr Greg Fellers, who presents the Haggin Cup. His voice always breaks with emotion when he speaks of these extraordinary horses that participate in this very demanding ride. "These horses today that we looked at, they are more than machines, they are athletes," he said. "They represent power, stamina, grace, heart, will, and they are our teammates. These 10 athletes that we looked at today represent the crème de la crème, the best, the most elite; out of that group we were asked to pick 1 that survived the challenge of the last 24 hours, the one who was in the best condition.

"It is my great honor to announce the 2013 Haggin Award goes to: Julioslastchance ridden by Suzanne Hedgecock."

Hedgecock has over 10,800 AERC miles. Julio is a 12-year-old Polish-bred (on the dam's side) Arabian off the racetrack with over 2000 AERC miles, and a record of 39 completions in 43 starts, including 5 of 6 100-mile finishes, with 6 Best Condition Awards over 7 seasons. It's been a difficult ride for Hedgecock the last few years with health problems in her family; though she has 2 previous Tevis buckles, this year's Tevis experience was very emotional for her. "Just to be out there showing for the Haggin Cup with all those famous people - it was overwhelming.

"I love my horse. I'm lucky to be here. I loved this opportunity."

*For a previous profile on Sue Hedgecock and Julio, go here:
http://merritravels.endurance.net/2010/07/looking-down-trail.html*

Posted by The Equestrian Vagabond at 12:42 PM