Owyhee Fandango Day 3: It's All About Your Perspective 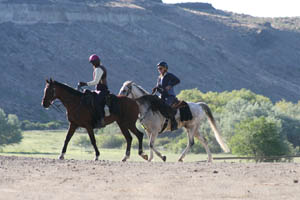 Ask the riders who finished the 100 mile ride, after negotiating the technical trail through the Whiskey Traverse boulder field along the Snake River, and they'll probably say it was no big deal. Ask the riders whose horses got pulled at the Celebration Park vet check after negotiating the boulder field, and they'll probably say that's what got their horses.

It's all in your personal perspective. 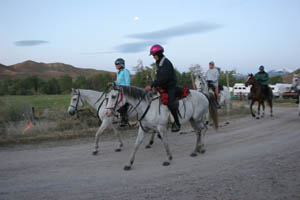 It was an endurance juggling feat, trying to pull off a 30, 50, 80, and 100-mile ride, some of that over a new technical piece of trail (the Whiskey Traverse) with 3 out vet checks in two places, and with ride manager Steph riding the 80 miler, but all the riders adhered to head veterinarian Robert Washington's suggestion/instructions: "Don't go faster than 10 mph, and don't go slower than 6 mph, and we'll have you covered!"

Additionally, the Snake River Amateur Radio Club was out in force, at basecamp, at the vet checks and at strategic places along the trail, from 5 AM till after midnight, helping keep track of all the riders on the trails, and without them, the ride just wouldn't have run smoothly. Since 2004 they've been coming out to help on the Owyhee 100-mile ride day, for their community service, for the ride Tshirts and for the Fandango food (by Blue Canoe Catering), and for the fun.

The 16 100-milers and 8 80 milers started out at 6 AM just as the sun was rising. It was starting out as a sunny day - the first in a long time - though it was cool early. Jose had the day off, and I was going to be helping at one of the out vet checks. Originally the plan (well - after changing several times!) was for me to drive Dr Michael Peterson to the far out vet check at Celebration Park by 9:30 AM. But, as few things go exactly as planned at a 100 mile ride, we were instead suddenly leaving at 7:15, to first drop a car off at the first out vet check at Sierra del Rio Ranch (for John T who had set out at 5:30 AM to pre-ride the trail by ATV), then go on to Celebration Park (a 40 minute drive to the Ranch, and from there a 40 minute drive to Celebration Park). And we had to scramble to leave even sooner than that when we got a call from the radio guy at the first highway crossing that a horse had tied up and was waiting there for transport back to camp. 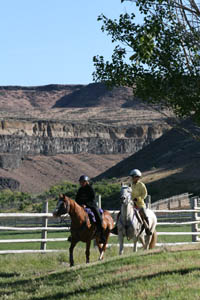 We got out there in good time - it was Naomi Preston and Karlady. The same thing had happened in this ride last year. Naomi had noticed it immediately about halfway between basecamp and the highway, so she nursed Karlady along till they got to the highway where they could stop and get transport back home. Dr Peterson was pleased with how good Karlady looked; he treated the mare with a muscle relaxant, and we went on to the Ranch while Naomi waited with Karlady for a trailer.

The first hundred and 80 milers were just coming into the Sierra del Rio ranch, at 15 miles, when we arrived. Dr Peterson stayed to help Dr Washington and Dr Balch for a while before heading out to the Celebration Park vet check, 25 miles down the trail for the 80's and 100's.

The park officials were happy to have an endurance ride vet check in their park. A couple of Canyon County sheriffs (we were on the north side of the Snake River) came by also, enjoying "something different." Some of the crews had time to take a little footpath through a boulder field where you could see some of the petroglyphs that helped make this Idaho's first (and only) archaeological park. If you had good binoculars, you could watch a golden eagle on the cliff directly across the river fetching food to its nest of young. 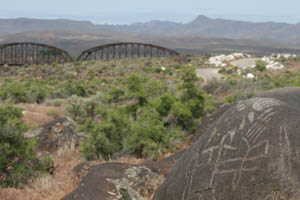 Lee Pearce on Fire Mt Malabar, and Christoph Shork on Double Dell, both on the 100 miler, were the first riders to be sighted across the Snake River, following the river path downstream, and approaching the Guffy bridge. They crossed the bridge and rode back to the vet check in the park. The rest trickled in over the next couple of hours.

Reactions to the boulder field were mixed - beautiful, no big deal, thumbs down. Five riders were pulled here. At least two of those horses had slipped going through the boulders. Steph had spent a good deal of time debating on whether or not to include that technical section as part of the trail (it got the riders to Celebration Park, which appeared to be a hit); after riding over it ourselves, she decided it was doable. After the ride, Steph decided she'll look for a safer route through or around it if this trail is used again next year.

The day started getting pretty warm and muggy (my perspective), but just as the last of the riders finished with their hold at the Celebration Park vet check, a cloud cover had cooled things down again, so that it was comfortable for the horses the rest of the day.

We returned back to basecamp, where Dr Burnett was taking care of the LD riders. James Robertsons and his mom Ada Stokes from Washington won the LD, as they had on Day 1. Junior Scarlet Kaplan and her horse Rushcreek Loyd ended up taking the 3-day Best Condition award for the LD.

Another happy finisher in the LD was Katrin Levermann from Canada. She'd planned to come to this ride for the first time with a group of friends, but they were unable to come. She had a not-fun 2-day drive here, getting two flats while crossing the border, then losing her lights and her brakes in the dark nearing Oreana. She wasn't sure how far down the bumpy dirt Bates Creek Road basecamp was (it's five miles! we'll put that in the directions next time), and twice she turned around (not an easy thing with a rig in the dark on a one-lane road with the lights not working right) and finally she stumbled onto neighbors Jan and Warren's property at 11 PM, almost in tears. They not only calmed her down and plied her with hot tea, they escorted her to basecamp at midnight and helped her unload her horses. Katrin ended up having a great weekend, finishing all three days on two of her horses.

Melanie Shirilla on Mika Nika, and her husband Doug Swingley on Iamsamm, won the 60. Dick Root and the steam engine Rocky were third, and Kara Yost and Musca Tiger Jack were 4th. Jack won overall Best Condition on the 50/50/60 3-day. Tom Noll and Frank finished the 3 days, giving 20-year-old Frank his 5000 miles. He still has a discussion every ride with Tom about how much faster they should be going.

Beth Buzis and TR Phantom of Wyoming, and Christina Long and LS Sole Talisman of South Dakota tied for first on the 80. It was Beth's longest ride so far. Jeff Stuart was third on JV Remington; it was Jeff's longest ride so far. "And I know why it's my only 80 mile ride!" he said, as he limped up to get his ride award. He was lured here partially by my photos of Owyhee. Amanda Washington finished her first 80. There are rumors a Tevis ride might be in her near future.

Ten of 16 riders finished the 100. Christoph Shork and Double Dell won it in 10:32. Lee Pearce and Fire Mt Malabar were second, and got Best Condition. Five Nevada riders finished. Karen Bumgarner's horse Z Summer Thunder gave Karen a great ride in finishing his first 100. "Not bad for a horse that tried to kill me!"

While some riders had bad luck, most of them still found things to smile about at the Owyhee Fandango. Having a good time here is pretty easy to do with this good crowd of endurance people.

Whatever your perspective, it was a good weekend for horsing around in
the desert. 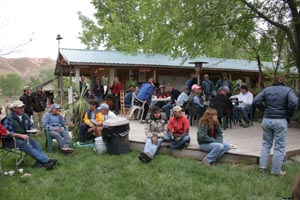 Posted by The Equestrian Vagabond at 1:14 PM