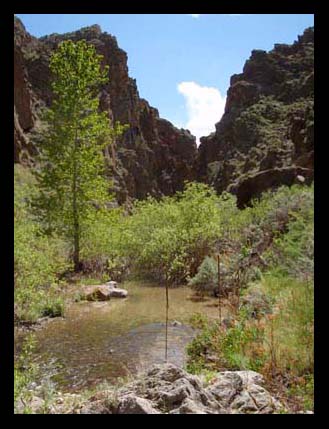 I headed out to chip away at a piece of my Mission of hiking the whole of Brown's Creek, from mouth near the Snake River to source in the Owyhee mountains.

The seed of this idea was the Two-horse Mystery and Cats day where I discovered and detoured to another Homestead on Brown's Creek - instead of hiking along the Second Cliffs like I'd originally planned.

Today, I was aiming for those Second Brown's Creek cliffs. First, I stopped to check on the First Cliffs eagle nest. I did see a golden eagle flying in the air, but, when I came to where I could view the nest - no eagle! And nothing on the nest! Oh no, the nest must have failed! There appeared to be a lot more whitewash on the cliffs, around one of the old nests and some nice eagle perches in the cliff, and in fact a lot of little whitewashes on the walls around the nest, but the nest itself looked a bit caved in beneath, and there looked like there was actually some snow in the nest. Snow? It snowed yesterday - maybe the eagles just recently abandoned the nest?

Well, no sign of eagles, so onward with my hike.

I thought I'd make a loop out of hiking a mile up Brown's Creek to the Second Cliffs, turn south towards the Dam Wash, and hike back along the Dam Cliffs and back down the Dam Wash 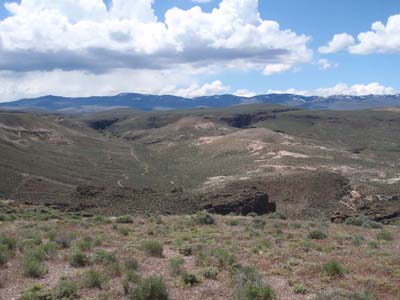 to where it ran into Brown's Creek at my starting point. 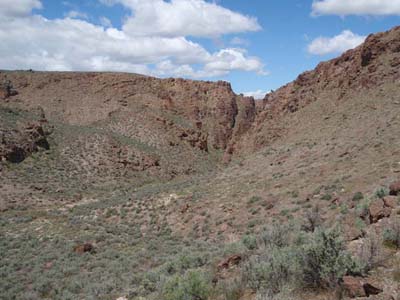 and instead followed it down to where it ran into Brown's Creek. but when it did, it was obviously powerful. Evidence of plant debris was several feet up the sides at places, and there were some drops over boulders where brief waterfalls had carved out deep holes. One drop-off was 4 feet high. I didn't want to be in here 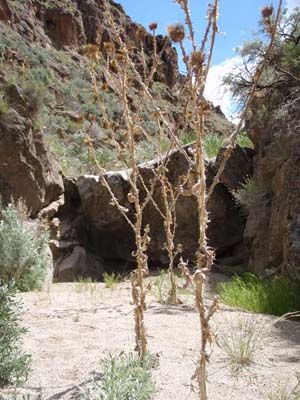 in a flash flood (and there were scattered showers around).

I kept stuffing my pockets and my backpack with cool rocks - round ones polished by water, sandstone-colored pink ones, obsidian nuggets. The echoes of canyon wrens (very cool calls) and chukkars echoed off the high red cliffs. A frog hopped around a little puddle of water. 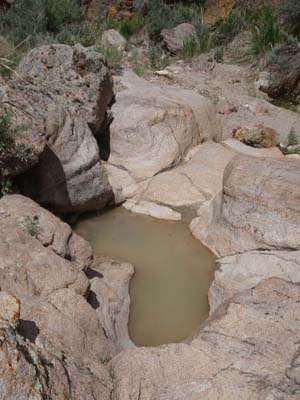 I watched over my shoulders for cougars. 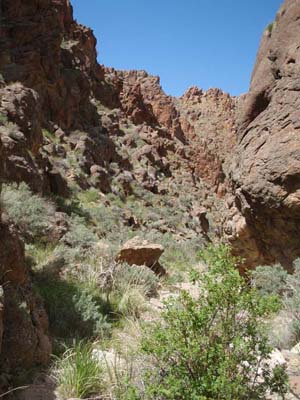 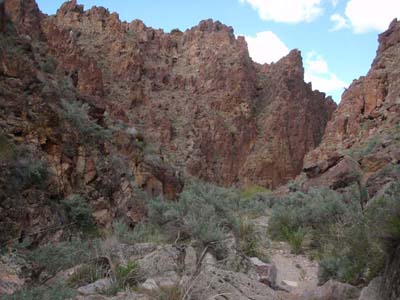 When I reached flowing Brown's Creek, 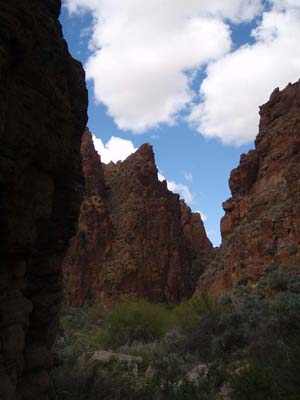 my plans changed. Why not hike down through the narrow canyon, below the eagles' nest, since it was abandoned, and see what I could find? The creek was swift, but narrow enough to rock-hop over. I worked my way downstream beneath the cliffs, watching for cougars, keeping my eyes on the rocks and caves. 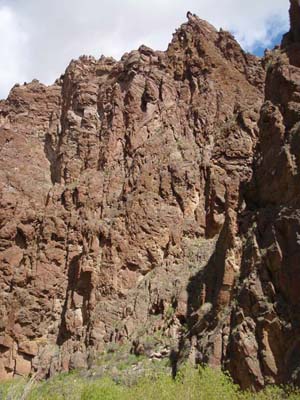 A prairie falcon was incensed at my presence and screeched his outrage, perching on the top of a cliff to glare down at me as I passed far below him. 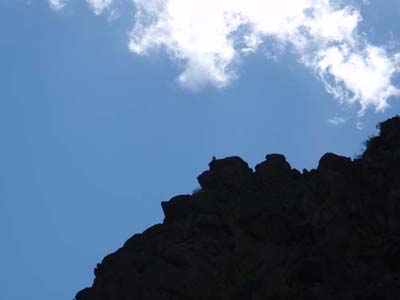 Below the old eagle nests, and a couple of (probably) eagle feathers. Further along the cliff, somewhat below the abandoned nest, another feather or two, and 2 broken eggs. (Couldn't be eagle eggs - too small, and they would have shattered if they ever made it this far down the cliff). But no signs of baby eagles, lumps or carcasses or piles of feathers.

I was going to work my way downstream and on out past the cliffs... and stopped myself right before I stepped into a collection of poison oak. The stinging nettle caught my eye, then I realized those pretty 3-leaved sprouts hanging out with the stinging nettle were not friendly. If they hadn't had some red on their leaves I wouldn't have noticed them, and I'd be in quite an itchy state now.

Instead, I thought I'd call it a day, and I crossed the creek and scrambled among the cliffs back up to the top. I decided to have one more look at the eagle nest. I hiked back toward it, popped out around a rock - and a golden eagle flew off the nest!

Oh. My. God. What an Idiot. I am the World's Worst Amateur Wanna-Be Birder. That 'snow' on the nest - was a pile of baby eagles! Had I figured that out, I never would have hiked through the canyon. At this stage of development, the babies are not able to thermoregulate, and if the adults abandoned the babies, they'd die. Great to know I could have really eagally screwed things up.

As it was, I must not have disturbed the adult on the nest while I was puttering around snooping far below the nest, and as I climbed up the other side, until I walked back to where I could see the nest. Nevertheless, after a quick look through my good Nikon binoculars (I couldn't tell how many baby eagles were in the nest) I did some golden eagle penance and got out of there quickly. (Idiot!) (What did I THINK baby golden eagles would look like, fuzzy nuggets of gold?)

Here is a picture of golden eaglets by Carol McIntyre.

Before heading home, I wanted to scout out a better starting point for the Dam Wash Cliffs (I'll have to cross the Dam Wash to get to the Second Brown's Creek Cliffs) next time. I drove another mile up the road, and found a side road that led me closer to the cliffs. I got out and hiked the half mile down to the cliffs and - almost stepped on a baby rattlesnake.

At this time of year?? I know it's May, but it SNOWED yesterday, for Petes sake. It's too cold yet for rattlesnakes! The high buzz of his rattles were so - unexpected, I first registered it as a cicada, until I realized we don't have those here, and I leaped away in fright, somewhat belatedly. The buzzing stopped, but I couldn't stop myself from turning back and creeping back, ever so carefully... to make sure... and there it was, a beautiful, little, maybe 7 inch long rattler. The babies are supposed to be the most deadly because they inject all their venom in a bite. It curled and started rattling again (I figured I was out of range, but I backed up more), and it slithered into a crevice in a rock.

Cougars, schmougars, I was extremely jumpy about rattlesnakes now. If I squatted down to look at the pieces of natural obsidian littering the ground, and my boot squeaked, I jumped. My eyeballs and ears were on hyper-alert and I was nervous and jumpy as a spooky Arabian horse.

Crossing a 2-track road (which I wouldn't drive on) that you've ridden on, if you've done the Castle Creek loop on one of the Owyhee rides, I made my way to the cliffs - and right where I hit the rim - right there in front of me across the deep canyon - was another golden eagle nest, with several white lumps on it. With my binos I still couldn't determine how many eaglets were laying in a row, but I thought i saw 5 or 6. Endurance riding bird biologist friend Karen S told me later 6 was impossible; 4 young have only once been recorded in the history of the world, and three is unusual (the normal is 1 or 2). So either I found a hawk nest, or there were just 2 or 3 biiiiiiiiiiiiiig white lumps of golden eaglets there. I have a feeling it was eagles, but when we return in a couple of weeks to check it out, we'll know for sure.

And I still have my boots set on hiking to the Second Browns Creek cliffs. I am sure there could be another eagle territory there, too. Fascinating, this Brown's Creek drainage!

Photos of the Brown's Creek First Canyon hike here.
Posted by The Equestrian Vagabond at 11:51 AM