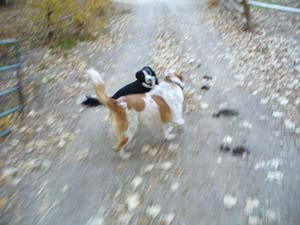 I wonder if he did, or if she has by now.
Posted by The Equestrian Vagabond at 7:25 PM

Such good stories. Thank you. The underlining makes it hard to read them. Is it necessary? is there some way to see the text without the line? I'm so glad the wound is healing! Heidi V.

Lines under the text? I don't see any lines from here...? But I will check with the Computer Guru. Merri

Ah ha, Beth figured it out. Are you using Safari as your browser? I'll see if I can do anything about that, but in the meanwhile, the text isn't underlined in Firefox or Internet Explorer. Merri