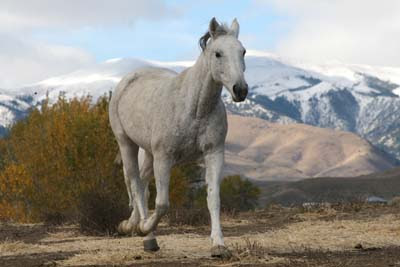 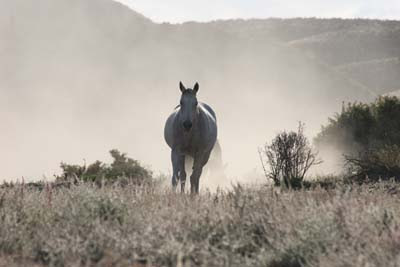 Wow - I had the best ride ever today on Quickie, with Carol and August. Quickie usually doesn't have too much enthusiasm going out - especially if we're on our own, so I'm still rewarding (bribing) her, with carrots in my pack. (August has also figured out where the carrots are - he reaches over while we're walking or trotting alongside and tries to unzip the pouch they are in.)

Today we headed out a new wash I'd never been in (henceforth known as August Wash), and Quickie willingly enough kept up with August as we wound several miles down this wash, slightly downhill all the way, to the highway.

There we took a carrot break, and went along the highway till we hit a road for the return trip. When Quickie - half Arabian, half Orlov trotter - somewhat reluctantly heads out on the trail, she Arabian-trots. When she's headed home and she's into it, the Orlov comes out.

The Orlov breed was developed in Russia in the late 1700's when Count Alexei Orlov crossed Danish warmblood mares on Arabian stallions. They're popular in Russia and Scandinavia now for harness racing, and many are used around the world in driving sports. They're described as "sure-footed, endurable, robust, strong, tough," with "impressive trotting action" - all of which fits Quickie to a T, mostly on the way home.

Quickie's sire was Nature's Ballet, aka "Blue," who was owned the latter half of his life by Lari Shea (see her full story on Nature's Ballet). Blue was a son of Natourschik ("Nature Lover"), a 17-hand Orlov stallion donated as a thank you gift to an American by the Russian Premier, Nikita Khrushchev, in 1959.

Two other Orlov stallions were donated to complete a "Troika", or hitch of three stallions pulling a carriage, where the center horse trots, and the two outside horses canter with their heads and necks bent exaggeratedly to the outside - see this amazing picture. Natourschik was the center horse in his Troika, which toured around the US for a while.

Steph bought Nature's Quicksilver - Quickie, and Nature's Kruschev - Krusty, (both by Blue) from Lari Shea, as a 5 and 4-year-old. Krusty was a huge black gelding - 16 hands and (recently) 1250 lbs; he had a trot as fast as Quickie, and he competed in the 1999 Pan Americans in Canada (finished 9th), the 2000 World Endurance Championship in France 2000, and the World Cup in Dubai in 2001.

And we flew on the way home today. And we were maybe only going 3/4 speed, a big ground devouring trot, (maybe 15-16 mph?) but she kept it up, mile after mile. Carol and August were at a hand-gallop to keep up with us. When Quickie needed a breather, she'd slow down to a walk for a short stretch, then on her own she kicked back into high gear. Even at half-speed, I was just amazed. I let her choose her own speed - she didn't have to work hard, and she could have walked if she wanted, or she could have gone at an easier, moderate trot, but she didn't want.

She was probably marveling at her own great trot, and I know she was having fun, too.
Posted by The Equestrian Vagabond at 11:07 AM