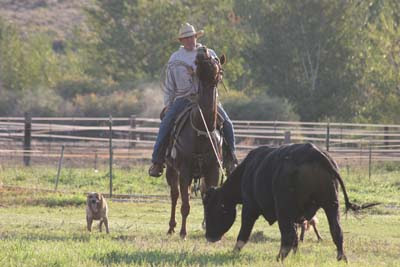 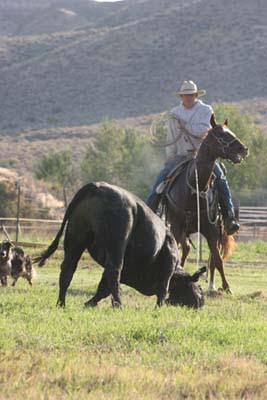 It happened again - another of Rohl's bulls hanging out up our Pickett Creek Canyon. (You think it has anything to do with us leaving the gate wide open up there?)

When they'd brought the bull down to house, I heard Rohl say, "He's a jumper," so I hung by my dead-lame horse in his pen to keep him quiet. I didn't want the bull jumping in the pen with my horse although I'm not sure exactly what I would have done if he did. "Go away bull! Shoo!" At least this bull was smaller than the last one, but he was still a BULL.

Instead the bull jumped/fell over a fence into our yard and Rohl followed him out the driveway. The bull then went through a tape fence into the grass pasture where Rohl finally got a rope on him. His horse and dogs held him till two more cowboys pulled up in a second trailer. "Where you guys been, on a hay ride?"

They jumped out, quickly unloaded their cowhorses and left the trailer open for the bull. Rohl's saddle was about to slip over his horse's neck from holding the bull, and he had to let go just as Cowboy #2 got his rope on him.

While a small crowd of endurance riders gathered to watch, Rohl got the end of his rope back, Cowboy #3 helped run both the ropes through the front of the trailer; and Rohl and Cowboy #2 pulled from the front while Cowboy #3 encouraged the bull from behind by pulling on his tail and trying to shove him forward. He finally hopped in.

Cowboys #2 and #3 loaded their horses in the compartments behind the bull; Rohl loaded up his steaming horse in his trailer and they headed off down the road.

We really ought to shut that gate up the canyon, so we don't get any more bulls here at the Spa, especially with the endurance ride starting in 2 days... but I don't think the gate works anyway.
Posted by The Equestrian Vagabond at 10:13 AM