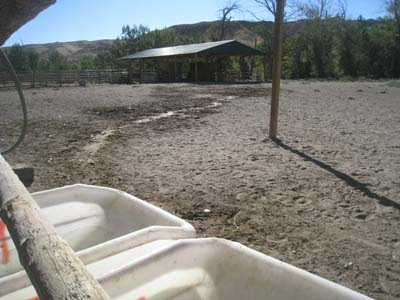 I have a Problem.

I've tried and I've tried to cure myself of it, but it just doesn't work. I JUST CAN'T STOP IT.

Some of you know what I'm talking about.

It's leaving the water on when I'm filling up troughs. I've left rivers and floods in paddocks everywhere I've lived - Texas, California, Washington, Idaho. I often leave the water on for hours. Once (OK, maybe twice, or... more than that... ) I left it on overnight and flooded a pen - the horse was left standing in a tiny dry corner of the paddock - though at least much of the water eventually ran off into the creek and got re-used somewhere else - so it wasn't THAT big of a deal, right?

This Problem is not quite an addiction, but it still requires some kind of a Step Program to help me change my ways. At least I have admitted I am powerless over the Water Problem, (step one) and I cannot control my compulsion without help.

Steph THINKS she has the solution. She says, "Just STAND THERE while you're filling the trough!" But - stand there for 5 minutes waiting for a trough to fill? I CAN'T! I have feed to mix, horses to feed, horses to move around, fly bonnets to put on or take off, fly bonnets to find (after Mac pulls Jose's off), heads to rub, ears to scratch, ears to smear with Swat, smooches to pass out, hugs to share, buckets to pick up, hay to fetch and put out for Finny and the Great Orange Pumpkin who are STARVING and can't wait ONE MINUTE LONGER for a water trough to fill before they eat, gates to open and close, and on and on... see why I can't just stand there and waste five minutes? (And that's just one trough - there are at least 5 to keep filled. That would take 25 minutes!!)

I've tried what one magazine suggested (a national magazine - see, I am not the only person with this problem), leaving a hair band on the faucet, and when I turn on the water, I put the band around my wrist, to remind me to turn the water off; when I turn the water off, I replace the hair band on the faucet. Well, that doesn't work, because I end up - while walking off and doing other chores - pulling my hair back into a pony tail with the hair band that happens to be on my wrist, because it gets in my way, and I forget all about the real purpose of the hair band and the water I've left on.

Even when I've tried standing there and watching the trough fill, then okay, it's done, Turn Off The Water, and I walk toward the water spigot - but have to go through a gate first - and immediately space out that I didn't actually shut the handle off and I go inside and hours later somebody finds the back pen flooded. Or, one time I actually waited (and fretted) there and watched the trough fill for 3 1/2 minutes (couldn't stand it any longer), and I actually turned off the switch - I clearly remember turning off the switch - and went in the house, and Steph found the front yard flooded hours later, because I'd TURNED OFF THE WRONG SWITCH.

See, even when I DO stand there to turn off the water, it just doesn't happen.

As for the recovery steps, the Sponsor thing is not happening for me. Steph, trying to be my advisor by suggesting I stand there and wait for the trough to fill - just doesn't work. I try to make amends for my errors, live a new life with a new code of water behavior - but it's really hopeless - hasn't happened my whole life and I don't see things improving.

John (who has also admitted to forgetting and leaving water on) suggested just putting the water on at a trickle into the troughs, since I'm not going to stand there and wait anyway, and since I'm going to run the trough over anyway. I said maybe I could remember to do that, so that when the water runs over for hours, it won't flood so bad. This is the second big Step in my Recovery - or should I maybe call it my Redirectional program - at least reduce the damage.

On the other hand, as a benefit, my Water Problem helps keep the dust down, albeit in a very localized area. Right? Maybe I don't need to reform.

Come to think of it, maybe I don't even have a problem.
Posted by The Equestrian Vagabond at 9:45 PM

Denial is not a river in Egypt -- but it might be the river in our paddocks.

Gosh, it is soooo nice to know there are others out there with my addiction!