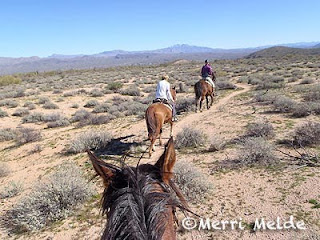 Tuesday January 26 2016
Maricopa county (encompassing the Phoenix/Scottsdale area in Arizona) made it a priority to preserve a portion of its natural desert as open space.
With this in mind, planning began in 2000 on an ambitious project of connecting the 10 regional parks with a non-motorized trail system.
Once completed (in cooperation with Federal, State and local agencies), this Maricopa Regional Trail System will be one big loop around the County, encompassing approximately 250 miles of trails for hikers, bikers, and horseback riders.
On a northwest corner of these trails, for 7 miles we went Tritty Trot Tuddle Dunking (Clydea's term for a trotting training ride!) through the Sonoran Desert amongst the saguaro and cholla, rabbits and Phainopeplas and a coyote, sharing the trail with hikers and a biker on this cool winter day.
If we wanted to, we could have ridden all the way to McDowell Mountain Park, where one of the Lead Follow Or Get Out Of My Way endurance rides is held. Maybe one day, some adventurous ride manager will put together a 100-mile point-to-point endurance ride on this trail system, which should, of course, be called the Maricopa Tritty Trot Tuttle Dunk. 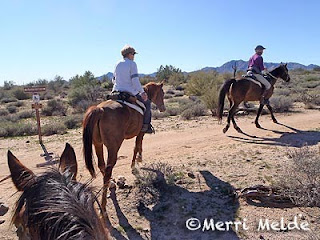 Posted by The Equestrian Vagabond at 9:45 AM No comments:


Posted by The Equestrian Vagabond at 7:42 AM No comments: