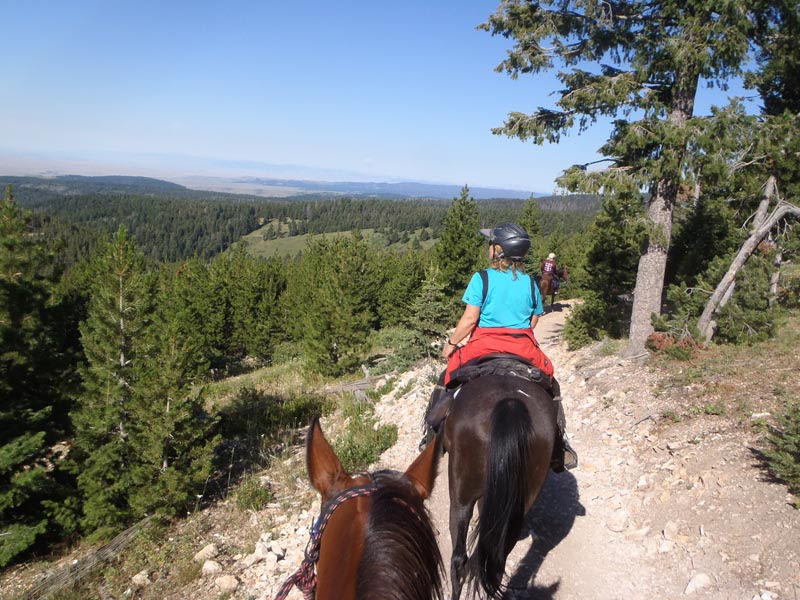 With a new endurance horse, you don't yet know what you don't know until you find out. We didn't know how tough Willie's feet were until we found out that they really aren't.

After a fabulous first 50-mile ride at City of Rocks, I worked hard on getting Hillbillie Willie, Steph's new Standardbred, ready for his next 50-mile (or 2) mountain ride at the brand new 3-day Top O' the World Pioneer ride in the Caribou-Targhee National Forest above Spencer, Idaho. It would be Willie's second ride, and first camping out experience (City of Rocks doesn't count, since he had a huge pen with his whole herd).

New Ride Manager Jessica Cobbley named it Top O' the World, because you are more or less on top of the USA: riding near and on the Continental Divide between (on the large scale) eastern and western United States, and (smaller scale) between Idaho and Montana. Ridecamp was at 6500 feet, and some of the trails/climbs took you to over 8000 feet.

The Caribou-Targhee National Forest is over 3 million acres and stretches across southeastern Idaho, from the Montana, Utah, and Wyoming borders. To the east the forest borders Yellowstone National Park, Grand Teton National Park and Bridger-Teton National Forest.  Most of the forest is a part of the 20 million acre Greater Yellowstone Ecosystem. So… think moose (I found moose poop), think grizzly bears (thankfully no sightings or smellings), think wolves (didn't hear any).

Caribou and Targhee National Forests were combined from original forest lands created in 1891.  While western sections of the forest have a mixture of sagebrush and grasses, the higher elevations in the east support lodgepole pine, and numerous species of spruce and fir. 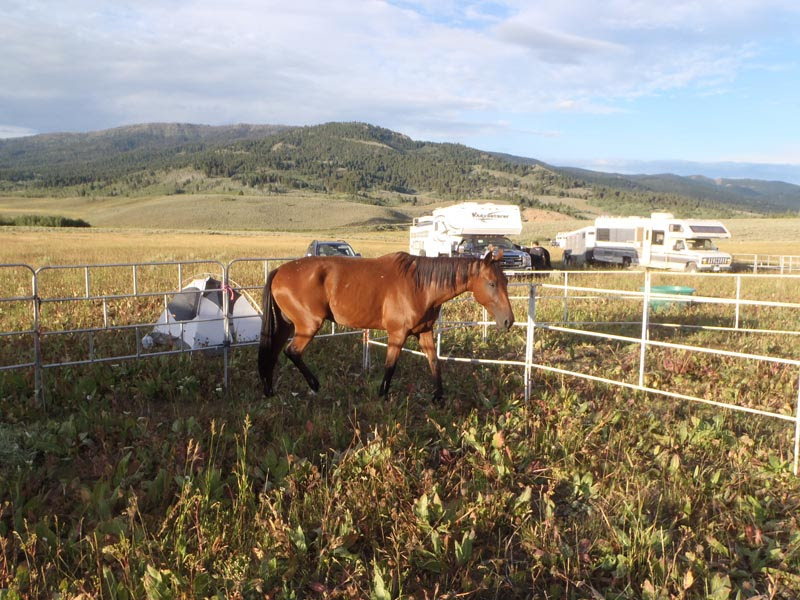 Ridecamp was in a lovely grassy meadow with a superb view of the forest and hills - possibly the prettiest ridecamp I've camped in. Cows lolled in the far meadows, with the bulls bellerin' and hollerin' every night and early morning. Every afternoon (entertainment for us in ridecamp), a cowboy would ride out and drive the cows up and over the hills… and by late evening, some more would trickle in. We figured he got paid by the hour, not the job. And every evening and morning, you could hear sandhill cranes honking around the meadow.

The set-up in Ridecamp was perfect, with plenty of room for rigs, plenty of water troughs set out, and off a main dirt road so we never had other traffic coming through. There was plenty of ATV/motorcycle traffic on the roads on the weekend, but all were polite and careful whenever any of them encountered any horses.

The Pickett Crick team travelled in force to the ride. August and Carol were willing to babysit Willie and me, since I wanted company, and Carol and August are pretty unflappable, and August had a few calm cool and collected endurance tips he could convey to Willie. Willie's pretty independent-minded, and I probably could have gotten him through a ride solo, but I'm all for making less stress for the young newbie endurance horse you're bringing along (and for me riding!).

Willie's last ride - his first one - was pretty picture perfect, with the perfect calm start. On Day 1 of the Top O' the World ride, Willie's Inner Racehorse came out. There was a long line of horses starting out across a field, that you could see for a good half mile, and Willie was pretty sure they were all headed to the starting gate on the racetrack. He wasn't *too* hard to handle, but he wanted to move out, and I discovered there's a lot of racehorse still inside him. August was his well-behaved self, and I told Willie to take notes.

When we got up on the road, and started trotting out, Willie was much better, and even when we came upon Mike Cobbley riding a bucking Talledega, I told Willie to take notes and don't ever do this. Willie said OK and kept trotting onward. It was still several miles, however, before Willie's excitement came down a notch.

There was one barbed wire gate Carol got off to wrestle with, and we let everybody behind us go on through before Carol tried once again valiantly to close it. It was hard on Willie, waiting, not moving on, trying to be patient, but it's all part of a ride - horses gotta learn all these things! And that gate was hard on Carol, and actually impossible… and it wasn't until Lee and Naomi came up behind us, that Lee was able to get off and wrestle the thing shut. Definitely need a cheater on that gate, and a couple of others in the ride. We told Ride Manager Jessica, "think old wimpy women, not Regina Rose" (who is not wimpy and can close any gate this side of the Mississippi).

Those pointy mountains sticking up in the morning sun haze out of the valley we were riding up were the Grand Tetons. The Tetons! How cools was that. We started climbing up out of the valley - up and up and up. It was a mountain ride, after all, and Willie's butt muscles that he has been working so diligently on developing, were getting a good workout. There were some lovely views down into the valley we climbed out of, and off to the valleys and mountains in the West.

This one was a climbing, rocky trail… and on this loop is where we discovered that this new Standardbred ex-racehorse Willie does not have the toughest feet yet. Up near the high points, around 8200 feet, I started feeling an occasional ouchy step in the left front, so I jumped off to check for a rock in his shoe. Alas, there was no rock, so I had a lame horse. Thank the endurance Gods that Carol had an extra Easyboot that fit over his shoe, so that helped make him near-sound. Good thing, because I had a long way to walk home, we figured 10 miles or so. Carol graciously agreed to stay with me and my green horse (possibly forfeiting her ride, if we spent too much time on the first loop), which I really appreciated, because while Willie might have been just fine being left behind by himself in the wilderness with no other 4-legged companions around, he might not have been fine!

Fortunately after several miles of leading Willie, I was able to get back on and ride him when the trail flattened and smoothed out. In fact we caught up at one point with our crick-mates, who'd walked those same downhill stretches. Happily we got back to Ridecamp in time for Carol and August to be able to go out on the second loop and complete their ride. 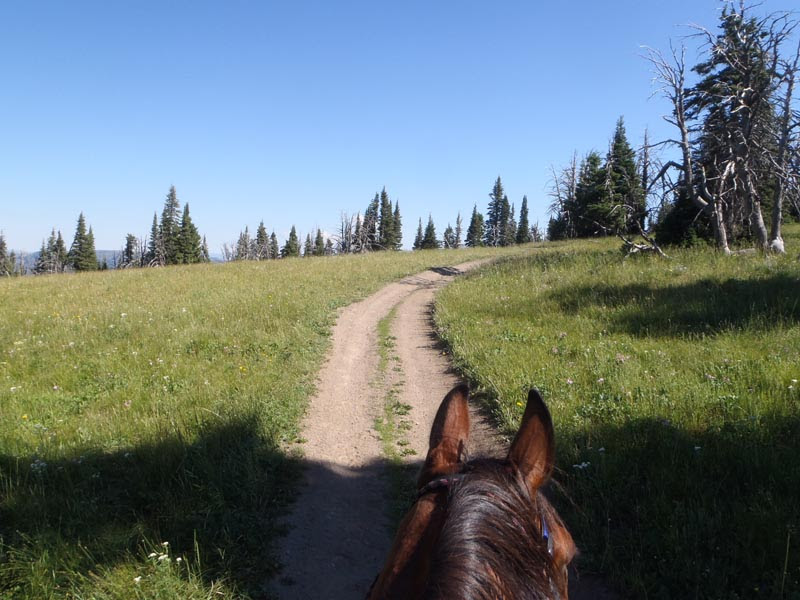 And while Willie was out for lameness, at least I know I did a great job getting him in top shape and butt-muscled up for his second 50, a tough mountainous ride with lots of climbing and downhill, enough so he would have finished the 50 if he hadn't bruised his feet.

So instead of more endurance riding experience, Willie got 3 days of the rest of the endurance experience and education. He learned to live in a portable pen, he learned to stay on a high tie, he was completely deserted by his friends on Day 3 and handled it pretty well (booooy did I work to keep up the distractions!), he learned to eat eat eat (sampling every different grass and slop bucket and water tub), and he learned to hang out with and visit people (I now believe he was a human in a former life). Indeed I was running out of things to distract him with when he started to stress about his departed buddies, but the one thing we kept going back to was the slop buckets full of water and wheat bran and oats, carrots and apples. Eventually I had to stop using that distraction because he was eating too much of it! By the end of Day 3 I felt like Great Aunt Mer trying to distract/entertain my 2-year-old Great Nephew Luca for more than 5 minutes at a time. (And by morning of the day after, Willie was so bored before sunrise, that he'd rearranged his pen, and had his foot stuck in a panel and was looking at and snorting at his foot, waiting for me to wake up and crawl out of my tent in my socks and come disentangle it. But at least he didn't escape over the weekend!)

Anyway, I heard from everybody it was a beautiful ride, and from the loop I saw, it was indeed. Tetons on the horizon (if you had the right angle down the valley, which you did at the start of Day 1), and layers of mountains (possibly the Sawtooths?) to the west. Day 2's trail went up to the Continental Divide and was by consensus the best scenic day. Harmless thunderstorms or rain showers moved through every afternoon. High temps were in the 80's, and down to a wonderful good-sleepin' 40's at night. The food dude from Spencer's Grill catered delicious meals every night: beef brisket, chicken quarters, and The Best Pulled Pork I have ever had, and I'm not much of a meat eater. It was extraordinary.

Connie/DWA Saruq and Sarah/Dezzie and Steph/Smokey were 3 of the 6 horses who finished all 3 pioneer days. Steph's Smokey got the overall Best Condition "Getaway Horse" (the horse that vet Robert Washington would choose to get away on, if he were being chased by Indians). That makes Smokey the 4th one of Steph's horses to get that honor over the years (Jose got it on a 5-day, Batman got it on a 3-day, and Mac (RIP) got it on a 3-day)!

So why did Jessica decide, as a relative newcomer to endurance, to put on a ride in a new area, 2 hours from home, and a 3-day ride at that? "Because it's a beautiful area that someone needed to put a ride on, and the only way to get a lot of people out was to make it a multi-day, and I did a 3-day to drive myself crazy." When she told Mike she was going to put on a ride, he said "No, no, no." And when she said it would be a 3-day ride, he said "Absolutely not." About a week before the ride, Mike posted, "The days are flying by and the ride is screaming towards us like a freight train. I keep asking myself who tied me to the tracks? Jessica was this your bright idea? Hope this works out."

It worked out just fine, as he got to ride and complete all 3 days on his tough Talledega gelding, a back-up 4H horse that Jessica found and got for him on Dreamhorse a few years ago. "Best wedding present ever," she said.

Like a true somewhat obsessive Ride Manager, Jessica is already making plans to make next year's ride better. She has in mind some more newer and better trails for next year, particularly to replace that rocky loop 1 on day 1, and particularly over toward the most prettiest side.

It is a beautiful, challenging ride where your horse is going to take you to places you wouldn't otherwise get to experience on Top O' the World. More stories and photos from the ride at:
http://www.endurance.net/international/USA/2017TopOTheWorld/


Posted by The Equestrian Vagabond at 6:42 AM 2 comments: