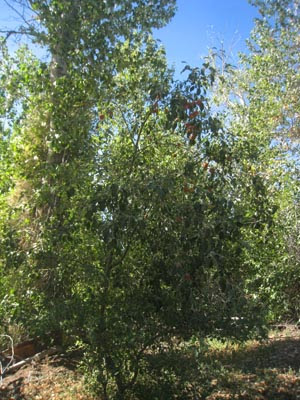 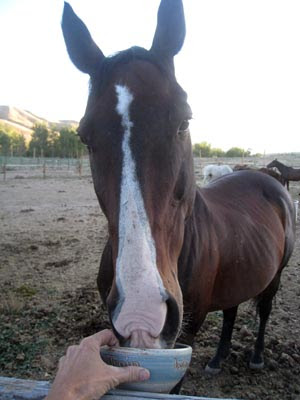 Yesterday evening, Stormy was hanging off by himself, grazing under some cottonwood trees by the creek. I was on the way out on a walk with the dogs and stopped to pet him, and saw he was chewing and sort of foaming at the mouth - what the - !?

Rather frantically, I grabbed his head and looked at his mouth - and he spits out a small red apple. Apple - who put an apple here!? And such a small apple? I looked up, and there above me - an apple tree full of little red apples. What? I've never seen that before!

I asked Steph and John later if they knew we had an apple tree right out there. "Apple tree?"

I walk near that group of trees every day - although maybe this was the first time the tree produced apples. First time, anyway, I've seen that the horses found the apple tree, too.

Anyway, I picked some from the branches I could reach, brought them in and tried them (quite tart!) and today I made Apple Crisp. Tastes sooooooooo good, especially with ice cream!

Stormy got the bowl of little apple cores : )
Posted by The Equestrian Vagabond at 6:42 PM