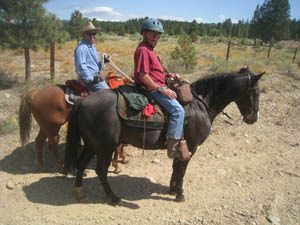 Back in 1862 Moses Splawn and George Grimes discovered gold in this area, starting the stampede to this part of the Boise Basin - and Grimes got the creek named after him that we are camped on and riding along. Two miles north of New Centerville, (the "town" we are camped outside of), was Centerville, a booming mining town in those days. All that's left now are a few pieces of lumber where there were once 3000 people and a hotel, stores, stables and saloons. An old stage road is nearby, linking to some other old ghost towns. Today, obvious evidence of the gold rush is remains of the extensive placer mining for miles along Grimes Creek. You can even clearly see the dredged up creek beds on Google Earth. What we didn't do back then to get at the riches in the earth - and what we still don't do now to do so. We rode along and crossed the torn up creek during much of today's ride.

Jose, who had been left at the trailer yesterday and probably logged 25 miles running in his pen, was so worried he'd be left behind today, that when I went in the pen this morning to put a halter on Rhett, he came up first and stuck his nose in the halter. "Don't worry Jose, you get to go today with Uncle Rhett!" We sent Mac home with Carol and Rick, so Mac wouldn't have to fret in his pen by himself while we were gone.

Today's trail had some hills but in general was flatter and easier - and just as nice, through Ponderosa pine forests on nice old logging roads. Steph and I fairly flew through the first 20 mile loop. Or, at least I thought we were flying, till we heard some steam-engine-sounding thing on hoofbeats bearing down on us (Jose heard him first, was trying to look over his shoulder). It was Dick Root on his huge handsome (some might debate me on that) half-mustang Rocky, zipping right by us with a huge trot. We followed after him around the next bend - but he was already gone, no horse, no dust, nothing!

We did come to one very steep slick uphill climb that Jose and Rhett clawed their way up; I was sure glad the rain that threatened last night (with thunder!) only lasted a few dust-spattering minutes, because this would have been heck to climb if it had been wet. The horses expended a lot of energy getting up this - luckily it was the only real hard steep hill of the day.

Back in camp we had a 45-minute hold before our next 15-mile loop, a repeat of yesterday's first loop. Rhett was getting tired now, yesterday's hills having taken much of the steam out of his engine, so our pace slowed down. Rhett would run out of gas going up the hills, and he could feel his hocks on the downhills, so we'd slow to a walk whenever Rhett felt like it. Jose wasn't really in trail attacking mode today, preferring instead to follow or go beside Rhett. Plus, I he likes to sight-see. If we're walking along, he'll stop on a little rise, and turn to gaze behind him, and around him. Not an Ohmigod-there's-a-cougar-back-there look, but a taking in of the scenery.

It was cooler today, with a bank of clouds headed our way, and the wind picking up - the cold front coming in. It looked briefly like we might get rained on, but the clouds bypassed us, and it stayed sunny and pleasantly cool the rest of the day.

Back in camp for another 45 minute hold, then back out on the trail for the last 15 mile loop, part of it a backwards repeat of today's first loop. As we were going out, here came Laurie Wells, finishing the 30, hobbling in on foot beside her horse, wearing a knee brace on her left leg. Sure, her knee hurt, but she won the 30! (And finished 2nd yesterday).

We communed with nature today, beyond riding through and appreciating the beautiful trees in the forest. Heading away from camp on the last loop, we disturbed two ospreys that were having little birdies for lunch. We stopped a few times on the trail for a treat - thimbleberries! Some of them were just ripe and ready to eat - bright red and sweet-tart and velvety. I gave one to Jose but he wasn't impressed. Jose found a nice red-tailed hawk tail feather - which I stopped to pick up for him - and not a quarter mile down the trail, he found a wing feather - which I also stopped to pick up for him. And we saw a coyote just off the trail (we tried to stretch our imagination into making him a wolf, but we couldn't) - could it have been the one that almost dumped Brian off his horse yesterday?

The last part of the last loop was very pleasant, and flat, but seemed to stretch out a long ways too... maybe because my knees were starting to hurt. Rather it's my kneecaps, where it feels like they've been busted with a hammer. It mostly comes on from riding a lot at the walk (they killed me when I led pack strings), and though we didn't walk excessively this weekend, nevertheless I did ride a hundred miles (almost), and there were a lot of downhills. It was the right knee that was becoming almost unbearable by the time we reached camp (but I bet you, if I'd have had 50 miles to go, it wouldn't have become intolerable till mile 49 1/2), and I had to ride Jose right up to Keith the vet, and rather slither off Jose, landing on my one (questionably) good leg.

As Laurie Wells sat in a comfortable lawn chair with her leg still resting in the brace, her husband Paul came up to help me. "I can trot him out for you!" just like he did for gimpy Laurie. Good thing, because I couldn't put any weight at all on my right leg for a few minutes. People were a bit concerned, but I said it would go away (it always does). I couldn't complain too much (I couldn't walk, that was all), because think of the how the horses were feeling the hills in their muscles and joints. Steph trotted Jose out for me, and he looked great, which was the important thing. I hobbled beside him back to the trailer, and after a half hour, my kneecap had returned to normal. The horses contentedly buried their heads up to their eyeballs in horse feed.

Tonight's human dinner, anther potluck, was smaller but still delicious. It was colder too, with the front and the wind, everybody coming dressed in layers. Cindy Bradley brought a potato dish that was to die for. Tom Noll insisted the name was "Funeral Potatoes," but "Cindy's Old Selam Taters" sounded so much better! Oscar, whose land we were camped on, dished out ice cream to go with a cake, and Cini Baumhoff had supplied various flavors of Dorothy's Fruit Syrups that her family makes and that are also to die for, especially the Razzleberry that I had to wrestle Liz Smallwood over. Luckily she was distracted by calling out the ride results so I got an extra helping. Lots of extra prizes were handed out above and beyond the completion awards (Tshirts yesterday, caps today, with the SWIT&DR logo).

Laurie Wells was cheered as she went up for her first place award in the LD, to cries of, "Next is a 50!" Laurie said "I know my girl can do it, I just don't think my knees can do it!" Oh, but we all know how we endurance riders love to ride through pain...

This ride was put on by the SWIT&DR club - Southwest Idaho Trail and Distance Riders - and there were many, many of them riding, or helping, or both. There were many additional volunteers including Sonny and Marilyn Hornbaker - Marilyn hobbling about on crutches after breaking her femur 5 weeks ago the evening before the Pink Flamingo ride, and ride photographer Steve Bradley and his wife Cindy.

It was a great collaborative effort to put on an excellent 2-day ride over historic gold rush trails in the Boise National Forest... and a good time was had by all.
Posted by The Equestrian Vagabond at 8:34 AM