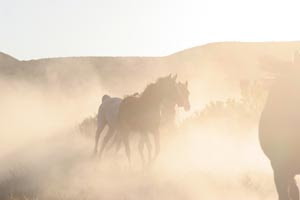 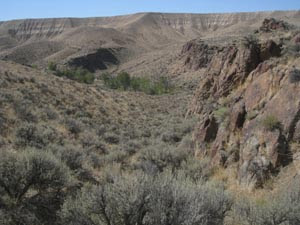 Another fall arrives and with it, another renewal of the Owyhee Canyonlands 5-day ride in the high desert of southern Idaho, and another gathering of a great fun group of endurance and trail riding friends, and a diverse group of horses (and 2 mules).

It's starting to get a bit harder to justify driving anywhere to endurance rides nowadays, but they came anyway: from Canada, Oregon, Washington, Nevada, Utah, and California - many of them took two days to get here - and of course Idaho. Attendance was down a bit, but the enthusiasm was high. There was the regular jovial Northwest group that comes year after year, and there were some newcomers, some of them part of a big group of Gaiters - riders on gaited riding horses, Tennessee Walkers and Paso Finos.

Not only was the unusual gait of those horses evident (they pace instead of trot, a sort of rolling motion interesting for the vets to watch 'trotting out'), but the presence of the riding group was conspicuous by the rousing cheers every night at the awards dinners: "Go Gaiters!"

There were the usual appreciated Owyhee amenities: nightly dinners by Blue Canoe Catering (Debra and Al), flush toilets, and hot showers. A good group of vets - Gene Nance, Robert Washington, and Michael Peterson - were here again, and the regular riders knew that at least one or two of those dinner nights would probably have an educational lecture by Dr Peterson, and, if we were really lucky, one of his famed Cowboy Poems.

The weather was just about perfect - mid 40's in the mornings, and high 70's to low 80's during the day. And if you were lucky enough to ride on Days 1 and 2, your trails were perfect - we had a good dumping of rain on the Sunday before the ride (the first time it's rained since oh, about 1942), which packed down the horrendous dust we've had all summer. The trails were pretty dusty by Day 5, but really, that's part of riding anyway, so there wasn't much complaining, just extra Ahhs and Ohhhs after the evening's hot showers.

The trails were mostly over BLM land, altitude around 3200', through picturesque canyons and washes and on flats and scenic ridges; crossing streams and following old trails through fiercely blooming yellow rabbit brush (conducive to sneezing). Starting times for the rides were a leisurely 8 AM for the 50's and 9 AM for the 30's

If you happened to not be tired enough every night to pass out, you could hear the resident great horned owls and screech owls hooting... but after the first day of riding, even the horses were sleeping soundly through the night.
Posted by The Equestrian Vagabond at 2:40 PM